The Lope: Tidings of Automated Joy 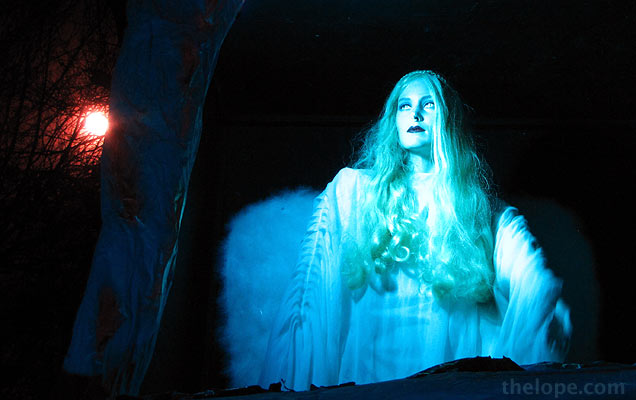 Every few Christmas Seasons I feel irresistibly drawn to visit the "Falmouth house" as some locals call it - the much-decorated home of Mike Babick at 7611 Falmouth in Prairie Village, Kansas (Kansas City area). I published lots of pictures of it in 2005 and added videos in 2006. This was an update with photos and videos from 2009; the text has been updated for 2010. 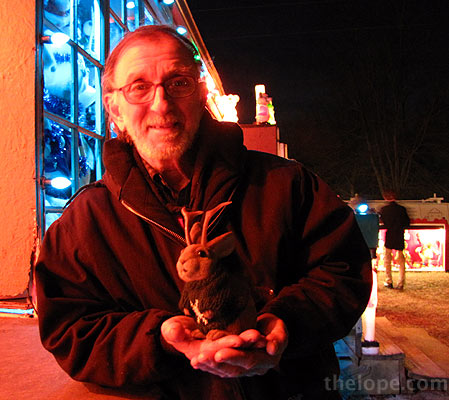 Babick, a retired employee of AT&T, usually has the automations running from around Thanksgiving until the first weekend in January. He told me that 2009 was the 44th year for the attraction. He is shown here holding Ace Jackalope, this website's traveling personality. He has offered to automate Ace by cutting his head off and putting a motor inside his body. I haven't taken him up on that yet.

Here's Babick's home back in 2006. Note the many stand-up cartoon characters on the roof. Those are gone now, literally blown away by an early morning storm on December 28 of 2008. 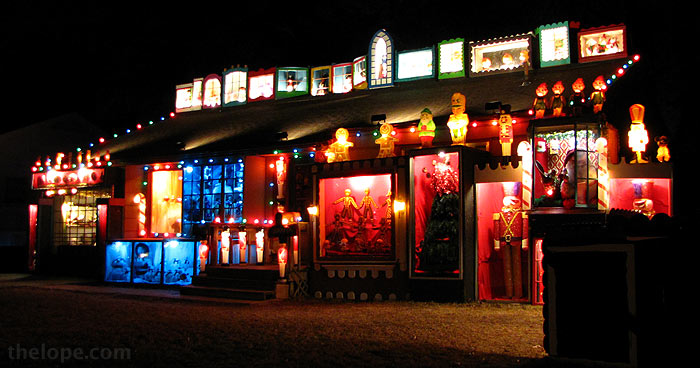 Babick revamped the roof for 2009, installing display cases on the roof. 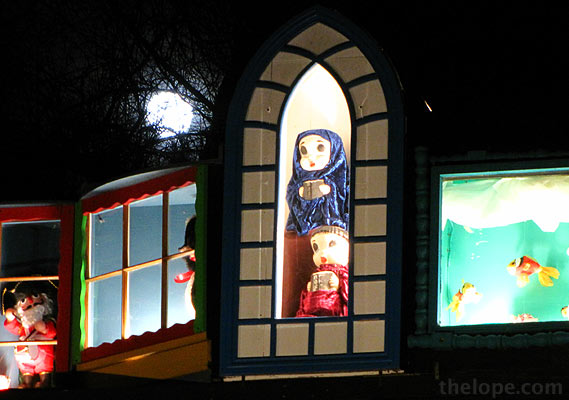 The moon rose behind cases of animated figures. Babick is particularly proud of the fish on the right (another view). The pirate on the left would be good for International Talk Like a Pirate Day. Many of the rooftop figures are new - stuffed animals and such - and were customized for automation by Babick. 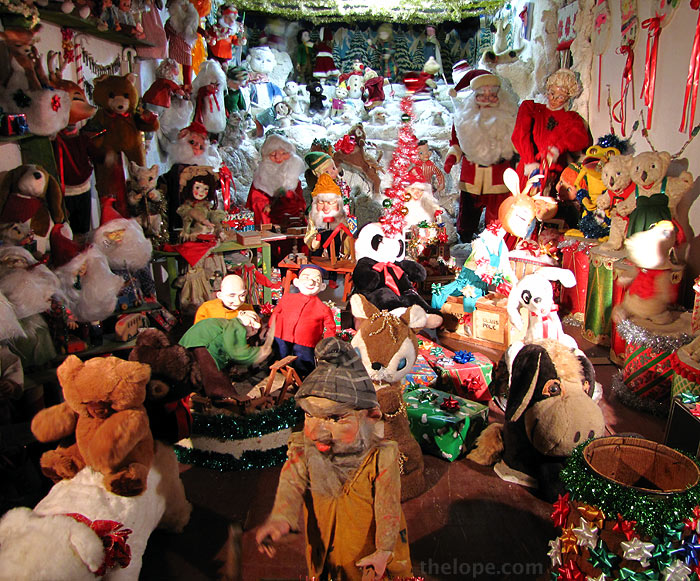 Babick's magnum opus is probably the garage, which he has turned into a Santa's workshop populated by a visual cacophony of elves and various forest critters. This is where most of the older automations are used. Most were made in the U.S.A. or Germany and date from the 1930's to the 1970's.

This video clip starts in the yard and moves in to show Santa's workshop:

Here are some details: 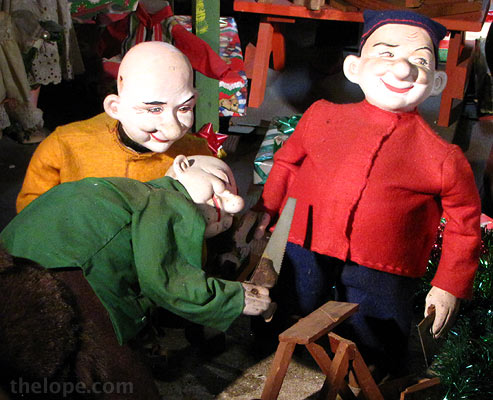 Any workshop has to have elves. 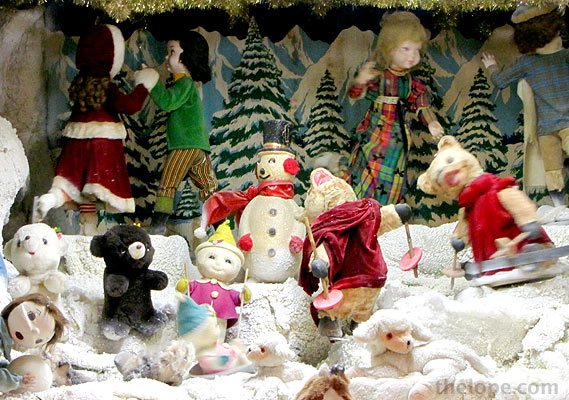 There's a snowscape in the back of the scenario. 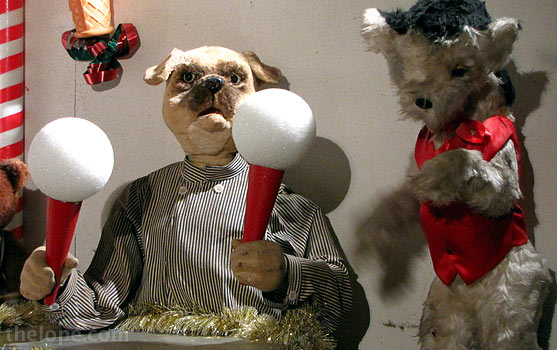 A canine ice cream server and, I presume, a customer, are located against the right-hand wall 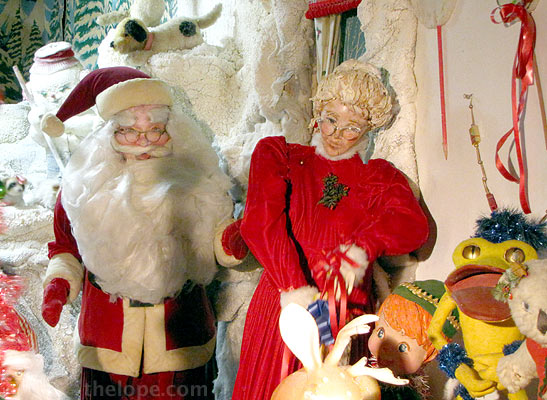 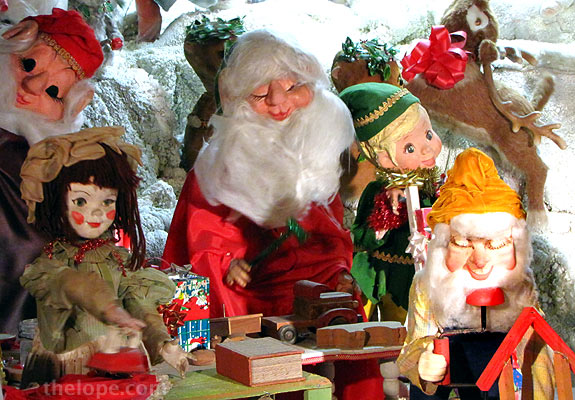 There are elves made by several manufacturers. 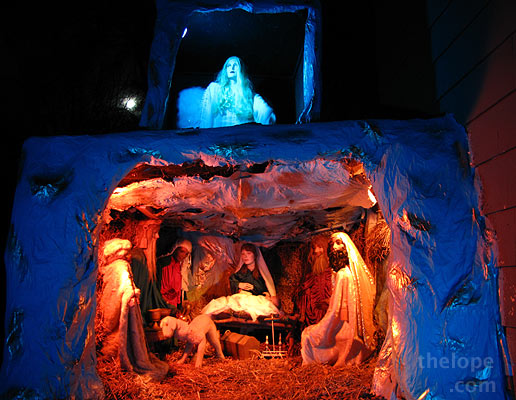 To the left of the garage is a manger, set apart from the more secular displays in both lighting and its stand-alone location.

Babick says the figures in the nativity are mannequins that he motorized himself. Had he not done so, he might well not have an automated nativity at all. 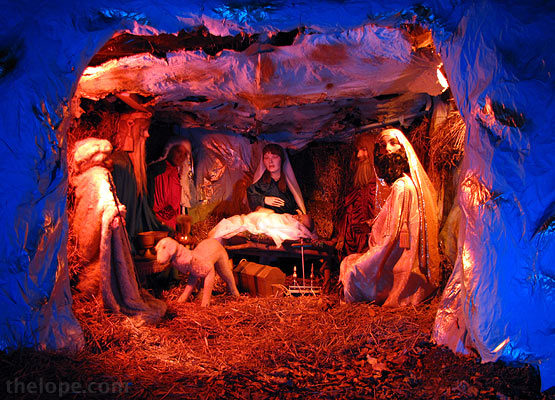 In my own study of the history of automated window displays, I've noticed that nativity sets were not common. Maybe this was because of price - I've seen some old catalogs and a nativity set, being made of several figures of adult size, was more expensive than one Santa of respectable size and a few diminutive elves. Maybe department store owners used static nativity displays, fearing that motorized ones might be considered tacky. It might even be that store owners wished to avoid criticism of using Christ to sell merchandise so they avoided using nativities in store windows at all. I don't know, but it would be interesting to talk to some old-timers about it. 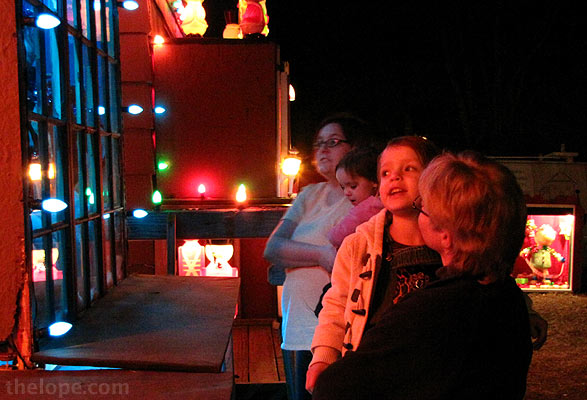 Every night during the Christmas season, Babick's house receives dozens - usually hundreds - of visitors, who either drive by slowly of park in the neighborhood and walk right up to the house for a closer look. 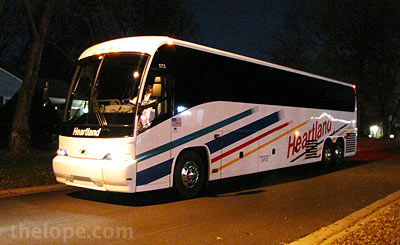 It even attracts tour buses. The vehicular and foot traffic has led to friction with some of Babick's neighbors, particularly in 2010 when a town meeting was held. Babick's ability to maintain the display was not impaired. In seeking a solution to the traffic problem, the city of Prairie Village employed a previous partial solution in making Falmouth a one-way street during the display's season.


This is a fairly complete video tour of the front of the house. It's long - five minutes and eight seconds. I taped it when nobody else was around in order to have a clear view of everything and not include disjointed bits of other peoples' conversation:

Some people have found the above video to be creepy because of the near-silence and the sounds of mechanical parts creaking. It has been suggested that I add Christmas music to change this. I won't do that because of the problem of finding public domain music and, more importantly, because for the study of old automations, it's interesting to hear the various types of motors working. 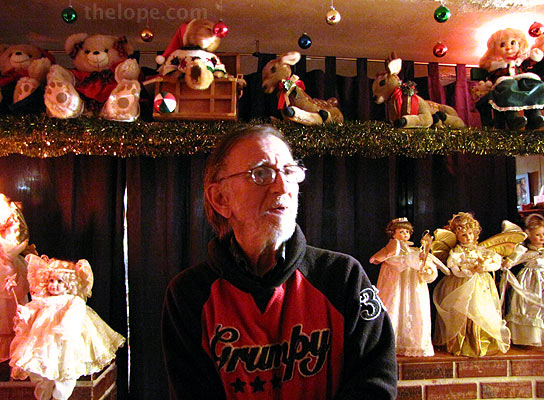 We were invited into Babick's house as he talked about the history of his display. 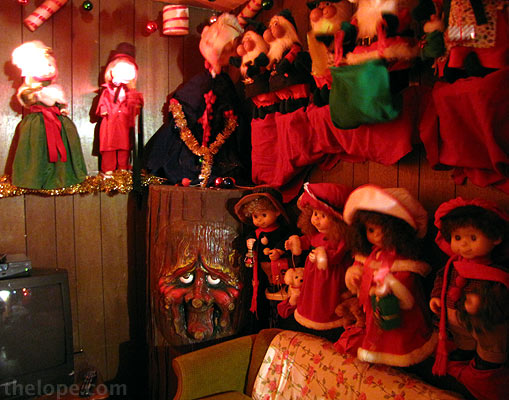 A talking tree sits in the corner of the living room.


And now, some shorter videos - the frogs are another set that Babick automated himself, using stuffed animals:


He also motorized the Arabian scene. You may recognize the monkey as the type available in many convenience stores and tourist traps, often with a shirt customized for the locale:


Here are some display cases to the right side of the house, including Santa and Rudolf. I asked Mike if he knew who made the Santa and he did not: 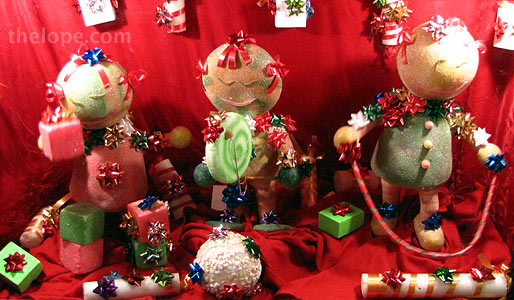 I hope to see the 2010 version of the display before it is torn down. In a phone interview, Babick told me he added a train to the front of his display.