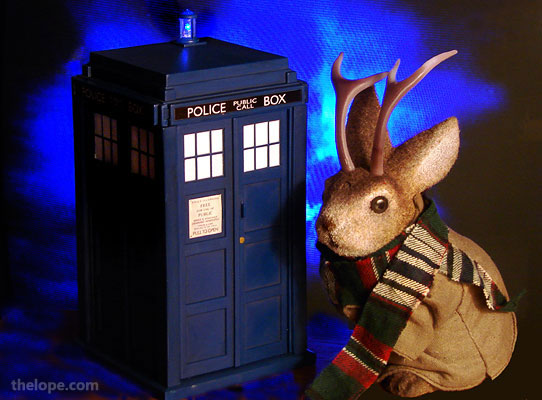 Sure, it's the end of one decade and the beginning of another; I suppose that's a big deal if you want to give base ten numbers that much power. But to fans of the British sci-fi series, Doctor Who, New Year's Day was all about the end of David Tennant's role as the Doctor.

This was no surprise as it had been reported in the mainstream press in England and the sci-fi press in the US. I was able to watch the New Year's Day special episode in which this happened - The End of Time Part 2 - because within minutes of its conclusion it was being divided and uploaded by a zillion British You Tube users. BBC doesn't seem too concerned at the moment about having these taken down.

Tennant's end was a satisfyingly emotional ride. There were a few bumps, like an annoyingly stereotypical old crone character and a few plot devices that seemed contrived, but it tightened up nicely in the last half. There was also a pleasingly enigmatic female Time Lord who is probably one of those long-term story arc characters they're so good at. Timothy Dalton wasn't bad as the President of the Time Lords, if a bit over-dramatic. It's to early to tell how actor Matt Smith will be as the new incarnation of the Doctor, but I'm suspecting a change from Tennant's accessible nerdiness to a sort of youth-oriented Anglicized rockabilly persona.

Something I really like about Doctor Who is that they do Christmas specials every year that actually air on Christmas Day, though British tourism officials might feel differently because there's always Yuletide peril involved.

Actually, I've never been in London on Christmas, but I have seen it roll out some Christmas decor early in the season.

posted by Ace Jackalope at 8:25 AM