The Lope: Hutchinson Symphony Christmas Concert at the Fox 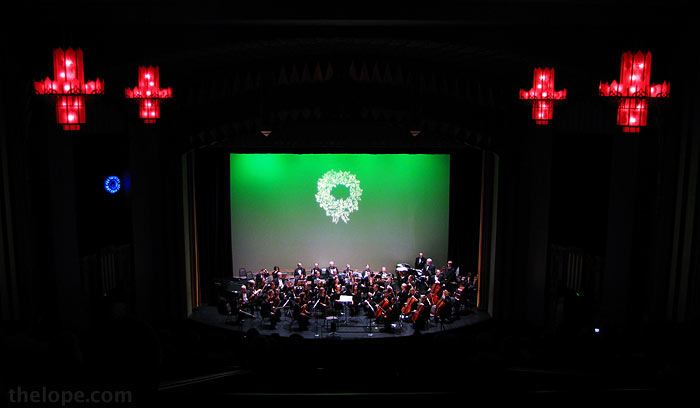 A Christmas themed background enhanced The Hutchinson (Kansas) Symphony Orchestra's Christmas concert this past Thursday, December 17, 2009, at the Fox Theatre. Actually, the Fox's art deco ceiling fixtures often show only one hue of the several available via the many colored light bulbs installed, but since they were momentarily red and the background was green, I took a picture as the orchestra tuned up.

I'd never been to one of their concerts before, but decided it belongs on my list of "things you should do because if they weren't available in your town you'd complain, so quit yer bitchin' and go support people who do something to make the place you live more interesting." I could really stand to shorten the name of that list.

Guess what? The concert was really good, and a fine enhancement to the Christmas season. Their rendition of Sleigh Bells was particularly fun, with the improvised percussion clippity-clop and whip snaps (the later done with hinged boards clacking). Here's their website.

The marquee of the Fox is so colorful I'd almost call it a Christmas decoration in and of itself. I mean, it is advertising a Christmas show and there are municipal holiday decorations in the shot, so here you are:

posted by Ace Jackalope at 1:21 PM

Wonderful interior picture at the Fox!