The Lope: Flying Saucers, Santa and Saturn Vs

Flying Saucers, Santa and Saturn Vs 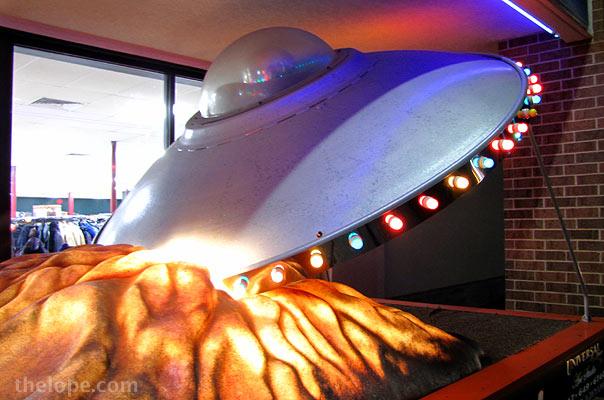 A crashed flying saucer on a trailer advertises the Eccentrix retail store at 2609 East 7th Street in Joplin, Missouri, an address on one of Joplin's Route 66 alignments.

Eccentrix has had this UFO for a few years, and I used it previously in a post about the anniversary of the (supposed) Roswell, NM, UFO crash. I'd never seen the lights working until yesterday, when I shot this video clip:

I enjoy this UFO so much because of a childhood association. When I was a kid in Joplin in the 1960s, the space race was going full blast and several area industries manufactured parts for NASA. I was told that one such company was Fairchild Industries at 13th and Maiden Lane, just down the street from where my family lived. My dad said they made a battery component for the Lunar Module; I don't know if that was really the case, and it doesn't matter. What did matter was that Fairchild had a unique Christmas decoration: a UFO on the building's roof along with Santa.

A few years ago, I thought to see if the saucer or any pieces of it remained in the building, which had become the home of King Press. I was allowed into the storage area by the nice folks there and saw very dated Christmas lights but no evidence of "alien" presence. In a throwback to my childhood logic, I like to think it's now in area 51.

The memory of the Fairchild flying saucer evokes a magic time when the moon was still our future and reindeer shared the sky with the Saturn V.

posted by Ace Jackalope at 6:40 PM