By the way - a disclosure - I'm the photographer for this event.

Writers and illustrators scheduled are R. A. Jones, Robin Wayne Bailey, Michael Vance, Selina Rosen, Keith Birdsong, Dayton Ward and Kevin Dilmore. There will also be a NASA astronaut though his/her name has not been announced. 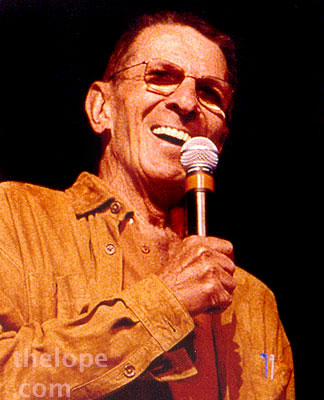 Leonard Nimoy is the clear headliner.

Nimoy last appeared in Tulsa at Trek Expo 2003 where he held a lecture and Q&A session (above) about his book, Shekhina. An accomplished photographer, Nimoy had distressed some members of the Jewish hierarchy by publishing artistic semi-nude photographs of women wearing rabbinical garb.

As I waited my turn to ask him a question, I tried to keep a cool reporter's demeanor and to hold back my inner ten-year-old from shouting "You're Spock! You're really Spock, man. Did you know you're Spock?"

My question was fairly journalistic, I think: "do you think that, through the controversy of your book, that you have opened any doors for other Jewish artists whose work may challenge the hierarchy."

Yeah, the question was OK, but my delivery was somewhat akin to the voice-cracked teenager on the Simpsons.

Oh, Nimoy's answer was "no", he didn't think he had opened any doors in that regard. 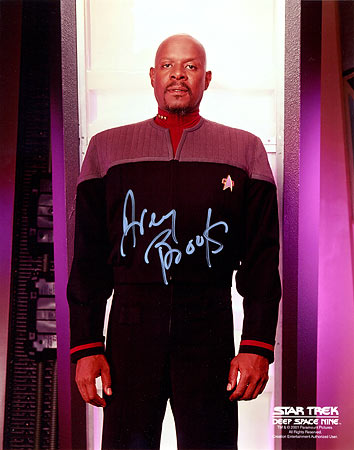 Avery Brooks, played Captain Sisco in Star Trek: Deep Space 9 (DS9). As you can see from the signed Paramount publicity still above, his signature looks pretty much like his name. This is unusually good penmanship for one of the trek bigwigs, whose signatures often look like a monkey got hold of a broken Spirograph.

This should be a DS9-heavy convention as there are three other regulars from that series scheduled to attend. 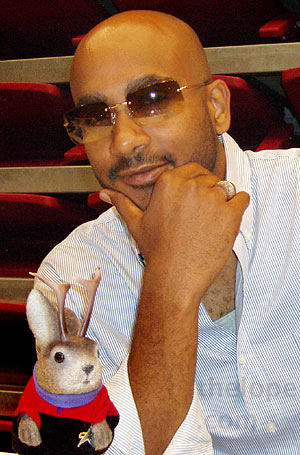 Cirroc Lofton played Jake Sisco, the son of Avery Brook's character on DS9. Here he is at Trek Expo 2006.

Tony Todd was announced in early May as a guest. He played the adult Jake Sisco in DS9 as well as Worf's brother, Kurn, in STNG and DS9. 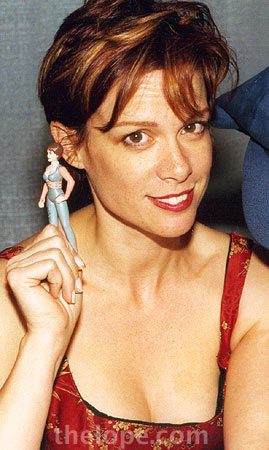 Chase Masterson played "Leeta the dabo girl" in DS9, and more recently played a green Orion woman in the fan-produced film, Star Trek: Of Gods and Men. She wasn't crazy about the mass-produced action figure of herself.

This year, the convention has at least one actor from each of the Star Trek TV shows.

Marina Sirtis played counselor Deanna Troi on Star Trek: The Next Generation, a role that grew from empathic and emotive eye candy in an anomalously low-cut uniform to more of a professional officer.

Denise Crosby played Lieutenant Tasha Yar and Sela the Romulan on Star Trek: The Next Generation. 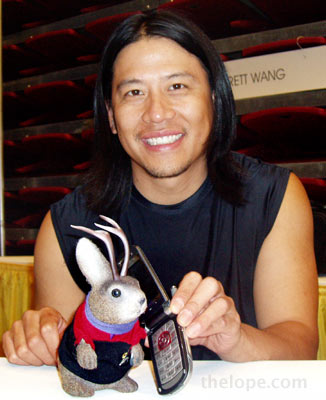 Garrett Wang played Harry Kim on Star Trek: Voyager. I'm not much of a Voyager fan, but I've got to say that Garrett Wang is funny and energetic. He's the guy you want at your parties to ramp up the energy a bit when things slow down. I've seen him save other convention speakers from themselves. He even called a friend of mine's wife from a convention when she was sick at home. Yeah, he's OK. (2006 photo) 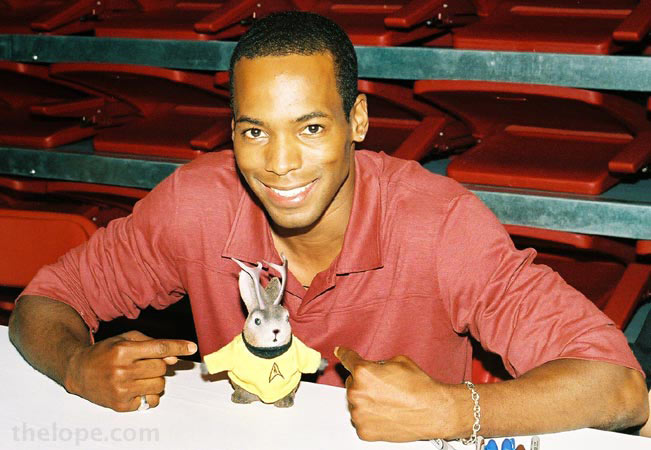 Anthony Montgomery played Travis Mayweather on Star Trek: Enterprise. I have to confess that I haven't seen most episodes of Enterprise. I'm a bad, bad trekkie. (2005 photo) 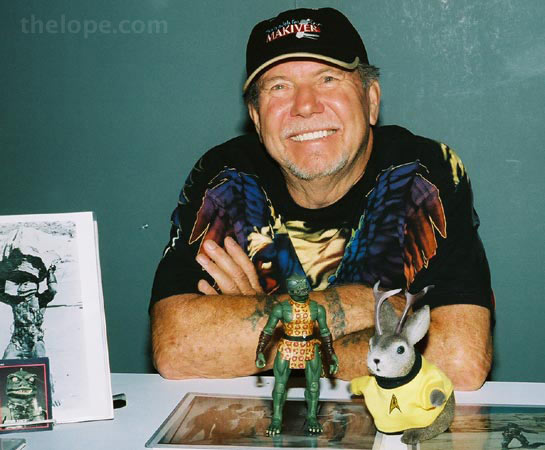 Bobby Clark - now here's an interesting guy with lots of stories about TV's younger years. Something I like about Trek Expo is their inclusion of one of these classic TV guys in the roster almost every year. (2005 photo)

Clark's claim to fame in trekdom is his role as the lizard-like Gorn alien that fought Kirk in the classic Star Trek episode, "Arena." But he's also had roles on Gunsmoke, Lassie and Alfred Hitchcock Presents.

Trek Expo seems to be following a formula that has been one of their traditional strengths in that they are featuring actors from most of the hot sci-fi shows of the past few years.

There are always a few writers at the show and I urge you to remember where good sci-fi and fantasy ideas come from and look at their wares. Long after the show is over, you could be home reading. 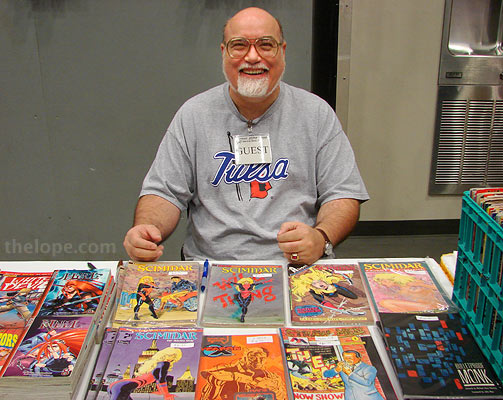 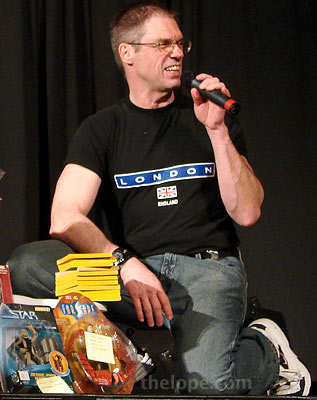 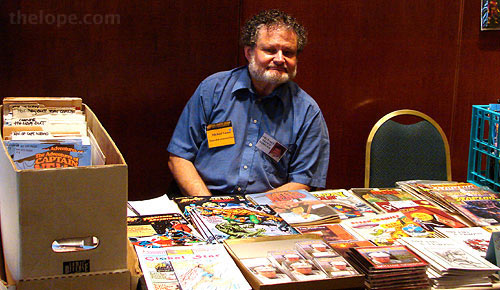 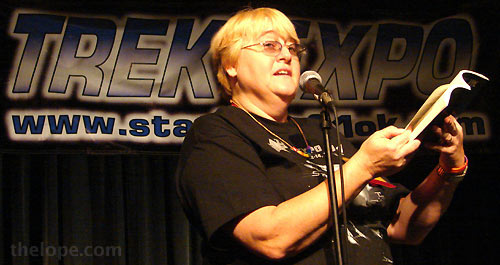 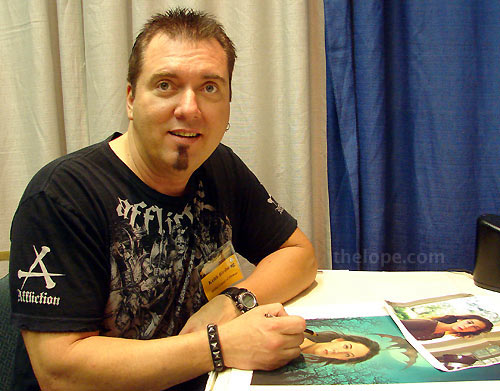 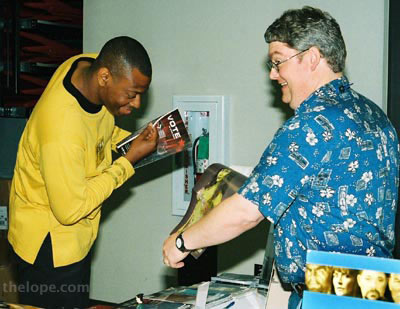 Writers Dayton Ward and Kevin Dilmore have been added to the guest list. Dilmore (right), a former Kansas journalist, shows a fan a pin-up of a green Orion woman in a magazine at Trek Expo 2005. 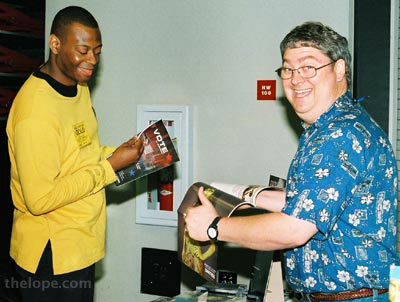 Max Grodenchik, who played Rom the Feringi in DS9 was originally scheduled to attend but will not, due to a scheduling conflict. Herb Jefferson Jr. of the original Battlestar Gallactica was once scheduled but has now cancelled.