After a few days in Kentucky, Ace and I began a drive back this past Tuesday, during which we rendezvoused with occasional lope chauffeur Patsy Terrell for a late lunch at Lambert's in Sikeston, Missouri. Lambert's is - in case you haven't been there or seen any of the zillions of billboards - the "home of the throwed rolls." They really do throw them.

Now, I usually love Lambert's and we've also enjoyed the one near Springfield, despite its status as a docking station for tour buses; they have macaroni and tomato sauce that makes up for that. This time, however, they had air conditioned the place to a degree of frigidity that impacted one's ability to enjoy a meal and we were leaving, prepared to brand the episode a below-par experience. 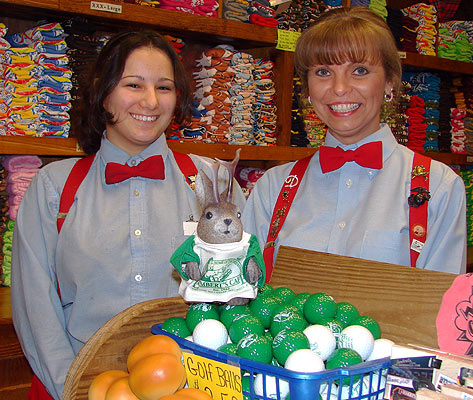 Our experience (mine and Ace's, anyway) was redeemed when Kayla (left) and Debbie - not even knowing we were unhappy with the cold - gave Ace this cool little Lambert's t-shirt. I had looked at some of the souvenir bears in the gift shop on the way out, and decided the bear was a bit expensive as a shirt donor for a one-time deal. As I reached my car, Kayla popped out the door and yelled that they had something for me; Debbie had wrapped up a free shirt. I don't know how he does it. I mean, women don't just offer me t-shirts out of the blue.

Anyway, this was a nice example of how a random act of customer appreciation can salvage an experience; I'll be back. 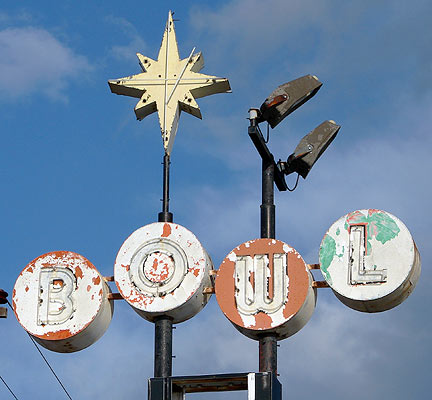 Travel timing was a bit of a concern as I had to make it all the way to Joplin (six hours) that day and would be driving through some iffy weather, but, lacking any common sense, I stopped to shoot signs along Malone Avenue (highway 62). 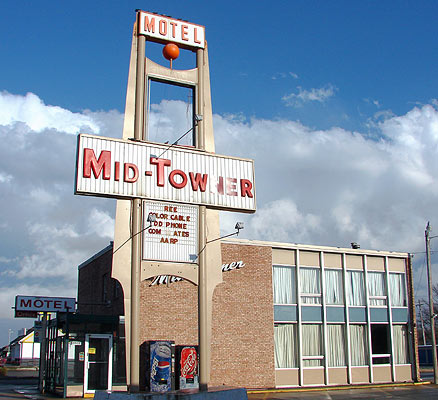 The Mid-Towner Motel is at 833 East Malone Avenue. I've seen this sign template before, so I bet the Mid-Towner isn't the original name of this place. 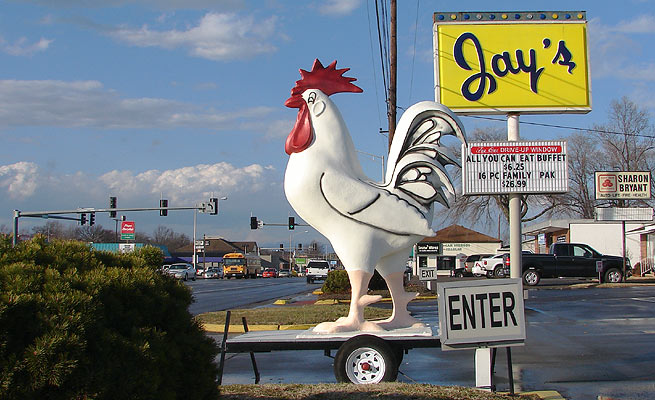 At Main Street I went right (north) just far enough to shoot the giant chicken because...well, I mean...it's a giant chicken, isn't that enough? Jay's Krispy Fried Chicken is at 218 N Main Street and has a good review at Chowhound. 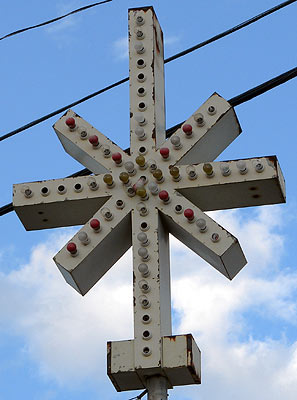 We parted company with Patsy and prepared to head west while she headed east to Kentucky for a few more days. Going south down Main Street toward Highway 60, I encountered only this minor add-on sign of roadside interest. 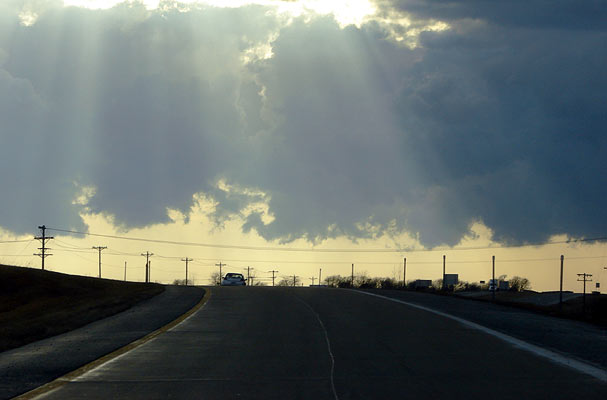 Heading up the on-ramp onto Highway 60, these ragged clouds dominated the view at 3:53 PM. 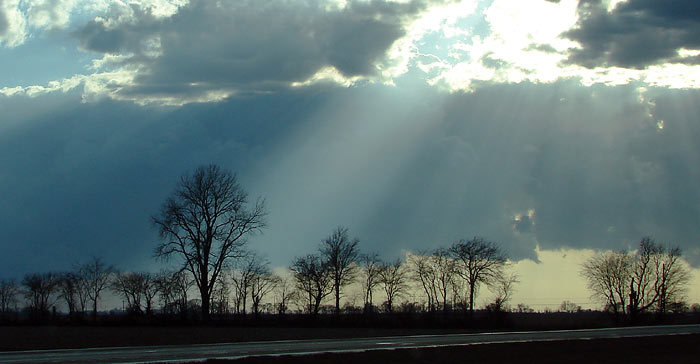 The clouds were moving very fast. later, I heard on the radio that the storm system was headed east at 60 miles per hour. It was 3:54 PM. 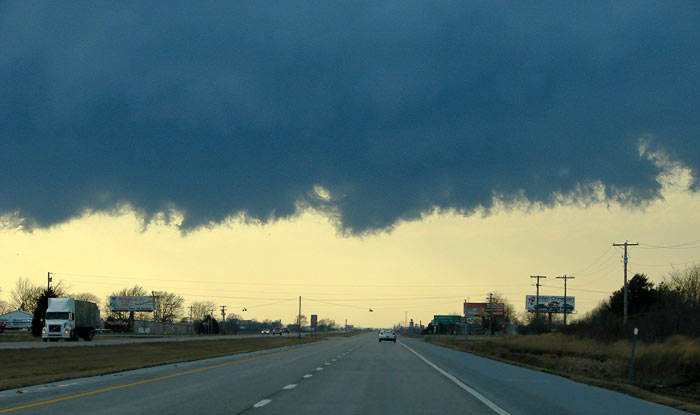 Looking west at 3:55 PM, the edges of this very dense cloud reminded me of torn construction paper, frayed at the edges. I am told it may be a wall cloud.


4:00 PM - five or six miles west of Sikeston - and the wind is worse. Not only is it severe, but it's erratic in a way I've never felt, and I live in Central Kansas, a land of wind. The rain isn't too bad but one brief salvo of hail hits the car. It felt like one edge of the car lifted a bit and I slowed down. That's when I looked up and to the left (south). 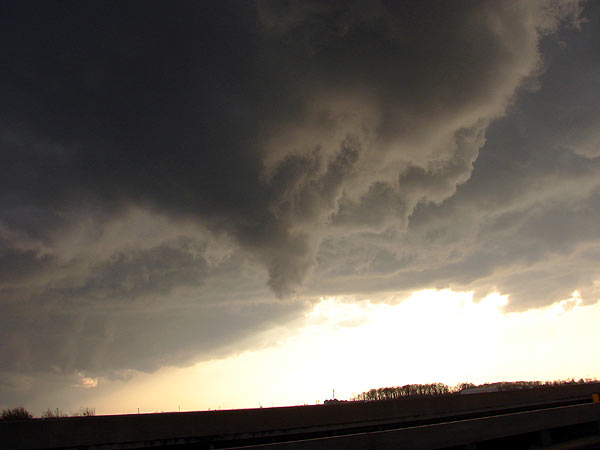 I don't know if it was a funnel cloud or not, but there was rotation - not so visible in the protuberance itself, but in the cloud structure ringing it. I'd have shot more but I was actually having trouble keeping the car on the road so in a rare display of good sense, I stopped shooting and just drove. When I was confident of the car again, I called Patsy to make sure she was out of Sikeston and heading east, away from the storm.

She wasn't. She was in the Sikeston Wal-Mart but took off soon after I called to warn her about the cloud rotation. She did, however, run across some excitement herself rather shortly. Read about her experience here.

So, how bad was that storm, and what did I see? There was more than report of a funnel cloud and at least one tornado warning. See a list of the reports and damages at this National Weather Service page.

Fifteen minutes can make a lot of difference when you're driving 70mph under a storm that was reportedly moving at 60mph the other way. I was in a sunny gap in the storm system at 4:16 PM, and it was time to catch a giant catfish to go with the giant chicken. The wind was still blowing - gusts of as much as 60mph, I was later to learn. You can see effect on the green streamers on the fish's trailer. Weekender's Fish House and Grill is at 16335 North Outer Road in Dexter, Missouri.

posted by Ace Jackalope at 9:54 PM