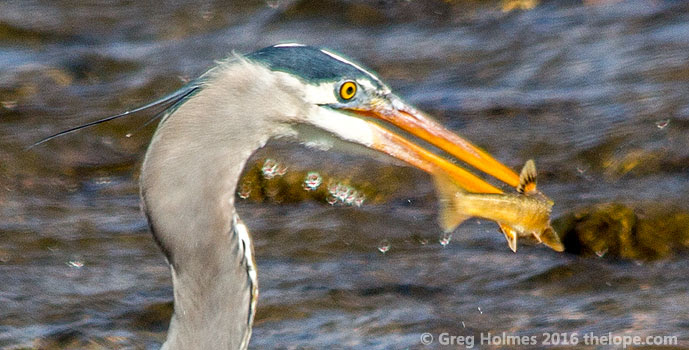 Check out this Great Blue Heron having a fishie. 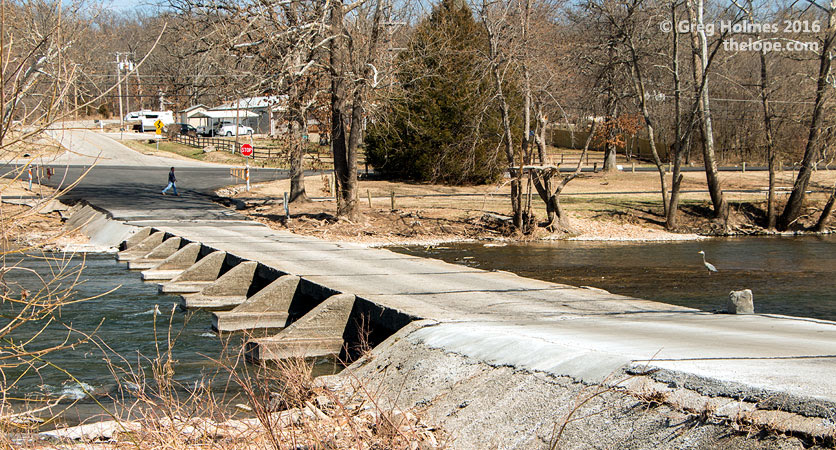 I spotted the bird recently while driving over Joplin's Low Water Bridge and stopped to watch it for awhile. It's visible on the right. 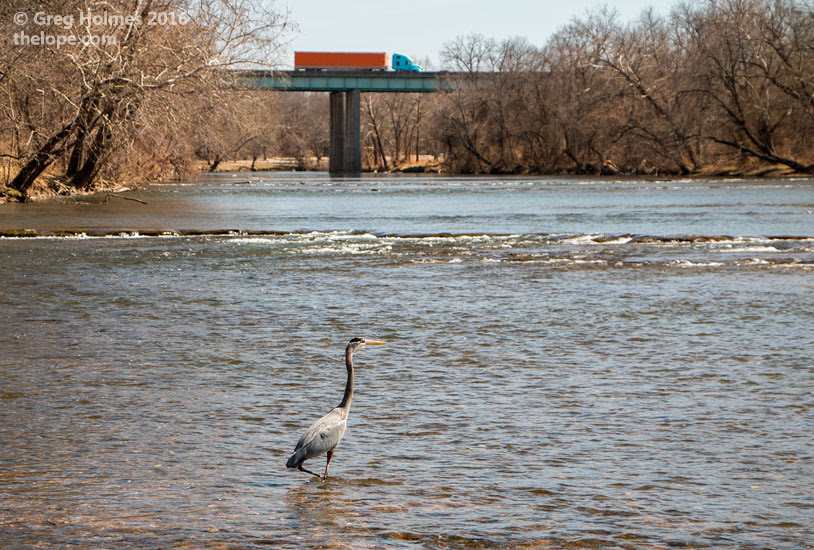 Here it is, shot from the bridge with I-44 in the background, which illustrates that Joplin's McIndoe Park and Low Water Bridge over Shoal Creek in the south part of that Missouri city can be a great place to observe wildlife along Shoal Creek. The bridge, variously called Jackson Avenue Low Water Crossing or, locally, just "Low Water Bridge" is endangered by a proposal to replace it with a taller, wider bridge that wouldn't be as affected by flooding as this one is. See this Joplin Globe article.

This proposal has met opposition due primarily to the historic value of the bridge, built, according to bridgehunter.com, in 1919 .

A petition is being circulated which calls for building the new bridge nearby but keeping Low Water Bridge for pedestrian and bicycle use. I think that's a good idea and I've signed it. 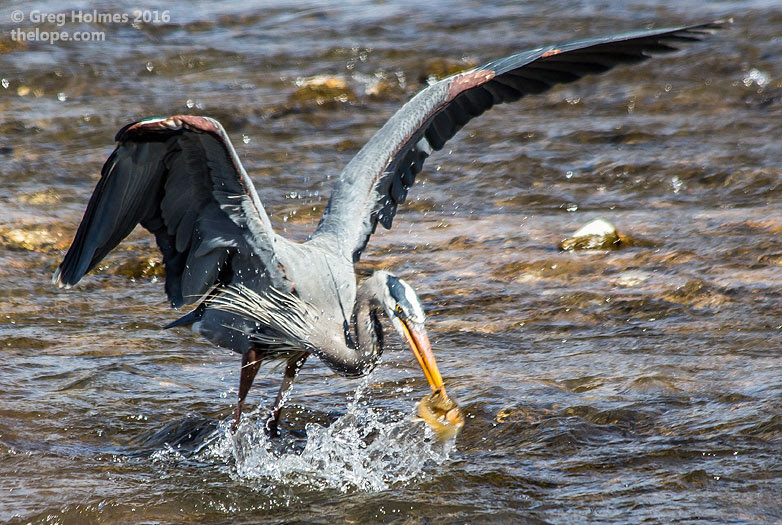 So here's that Blue Heron catching the fish. This is the second fish he caught in 20 minutes. The first time, I was too far away to get it. 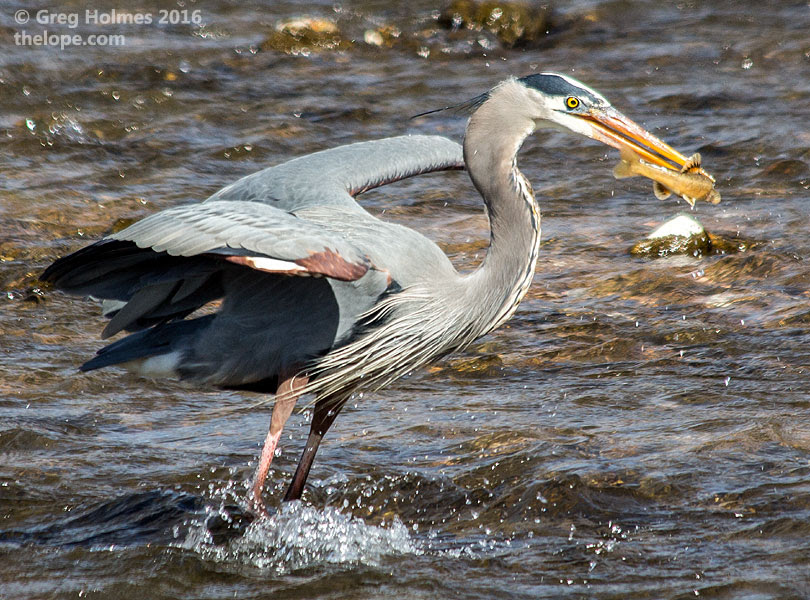 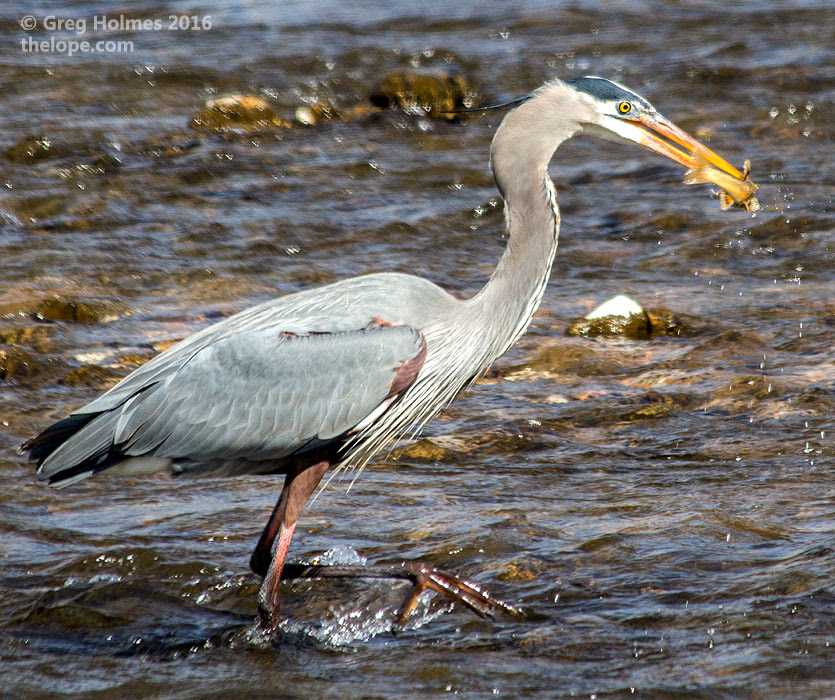 Back to that bridge...


One of the design principles of a low water bridge is that, due to the lack of guard rails, water flows over the small profile of the bridge. Here's that idea in action on April 26, 2011 when Shoal Creek flooded. The bridge is actually submerged but you can tell where it is by the signs.

A Neotibicen tibicen cicada is ovipositing (laying eggs) when a weed blowing in the wind annoys her to the point that she flies away. This was July 9, 2012 at 7:50pm. Due to nomenclature changes, Neoibicen tibicen was formerly known as Tibicen tibicen and before that, Tibicen chloromera.


August 11, 2011, 9:12 p.m - I had been looking for cicadas with no luck when I happened across this snake descending a tree along Shoal Creek. Note what happens when it checks out a spider on the way down. I believe it to be a black rat snake of the genus, Pantherophis, though I cannot ID the species (probably obsoleta). If anyone can ID the snake or spider, please comment.

posted by Ace Jackalope at 7:27 AM