The Lope: The Search for Dwight Frye, Kansan

The Search for Dwight Frye, Kansan 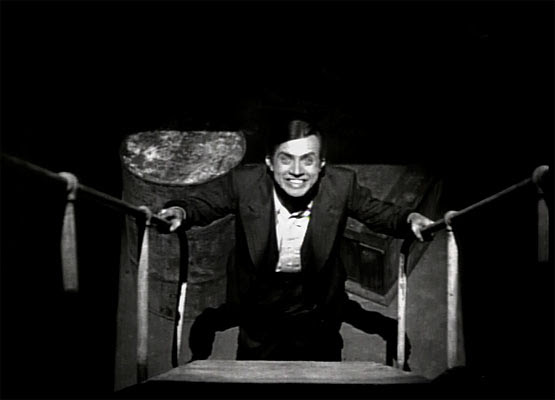 Dwight Frye, "the man with the thousand watt stare" was the wild-eyed fly-eating thrall to Lugosi's Dracula in 1931, his insane laugh is one of the most chilling scenes in the movie. Later that year he played Fritz, who assisted Dr. Frankenstein in making his monster, although he did steal the wrong brain. He went on to play small roles in several more Universal Studios horror classics, including Bride of Frankenstein, Son of Frankenstein, Ghost of Frankenstein, Frankenstein Meets the Wolf Man and the Invisible Man.

Such roles were a blessing and a curse. Though he originated iconic characters that have since become ingrained in pop culture, he was hopelessly typecast even though he had previously proven his versatility in a variety of parts. Even so, he played minor roles in about 60 movies before dying of a heart attack on a Hollywood bus in 1943 at the age of 44.

But it isn't his death that's interesting to Kansans. It's his birth in Salina in 1899, giving fans of the classic Universal Horror movies a piece of geography to associate with the classics so many of us baby boomers thrilled to in the days of the late night creature feature.

Several sites devoted to famous people born in Kansas list Frye, so I wanted to find an specific site to photograph. A biography of Frye, Dwight Frye's Last Laugh by Gregory Mank, James Coughlin and Dwight D. Frye (son of the actor in question), gave me his parents' names: Charles and Ella Fry. Later in life, Dwight would add an "e" to the end of his last name.

So, now having the names I needed, I looked for more documentation. The 1898, 1900 and 1901 city directories in the Salina Public Library do not list any Frys and are not indexed by address. It's very possible the Frys simply did not bother to fill out a directory survey form.

Fortunately, there was a census taken in the brief period of time in which the infant Dwight Fry lived in Salina. This entry in the 1900 census shows that Dwight and Ella Fry had a one year-old son named Dwight as of early June in 1900, when the data was collected.

And the form contained just what I was looking for, an address: 321 South 8th Street. Here's a link to the full page.

Other info gleaned from the census shows that they owned the home but owed a mortgage. Charles was born in May of 1871 in Ohio and Ella was born in 1872 in Virginia. Dwight is shown as being born in Kansas. The handwriting on the form is very stylized and I cannot discern the professions of Charles and Ella, nor can I read the month of birth for either Ella or Dwight. Other sources list Dwight's birthday as February 22, 1899, and Dwight Frye's Last Laugh states Charles was a farmer. 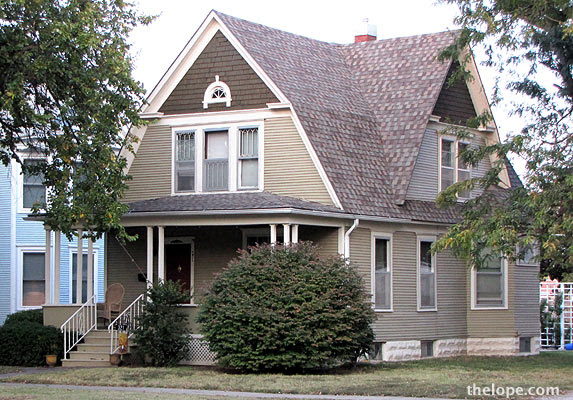 With the address in hand, I photographed the house at 321 South 8th Street in Salina. I have not been able to contact the owners or residents.

But is this the Fry home, the same house that was there in 1899?

The Saline county appraiser's office has estimated information for the house which places its construction at 1905, but a Historic Resources Survey done in 1985 estimated the year of construction as 1900. So, two official sources contradicted.

Other potential sources of information (i.e. building permit records) simply don't go back that far. I'm waiting on some other records but I think I already found the answer in a really interesting resource called the Sanborn Fire Insurance maps. These were maps used to assess fire risk. They show lot numbers, addresses and - most useful for my particular purpose - drawn outlines of houses. Sanborn maps for many Kansas cities are archived online at Kansas University.

This is the 1899 Sanborn map drawing of the house at 321 South 8th St. in Salina. This would likely have represented the home of Charles and Ella Fry and their infant son, Dwight. It doesn't closely fit the footprint of the present home at that address, and if I understand it correctly, it indicates a one story house. (URL of 1899 Sanborn map)

By the time of this drawing for the 1905 Sanborn map, the Frys were probably no longer in residence as records held by the Saline County Registrar of Deeds show that Fry sold the property in 1900 to a Charles Walker. (URL of 1905 Sanborn map)

When I saw the next chronological map, the answer to my question about the present house being the Fry home became "probably not."

By the time of the 1911 Sanborn map, the house shown on the property is significantly different and pretty much matches the one there now. The bay windows could have been added between 1905 and 1911 and other additions could have elongated the house but the placement on the lot relative to the northern property line is different. (URL of 1911 Sanborn map)


But at least I found the address, and with it a couple of ironic visual perks. First off, the place where the man who played Dracula's most iconic victim lived for a time is nearly surrounded by churches. Across the street is the First Presbyterian Church at 308 South 8th Street. The First Church of Christ Scientist is a block away at 256 South 8th Street. The Frys, including the adult Dwight, were Christian Scientists. St. John's Lutheran Church is across the alley, behind the house. That's a lot of crosses to surround the residence of Renfield. The Sanborn maps show that none of these churches were there in the Fry's era. 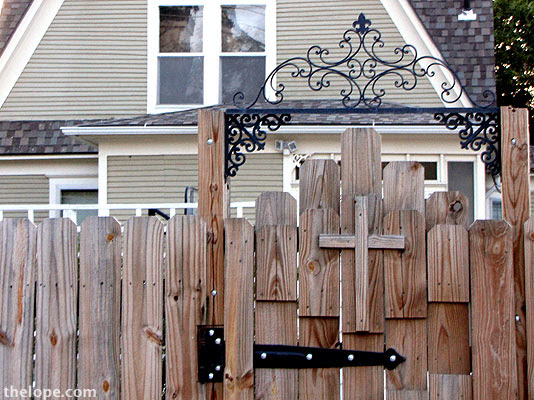 As if the churches weren't enough, there's actually a wooden cross on the back gate of 321 South 8th, itself. And a handsome bit of work, it is. 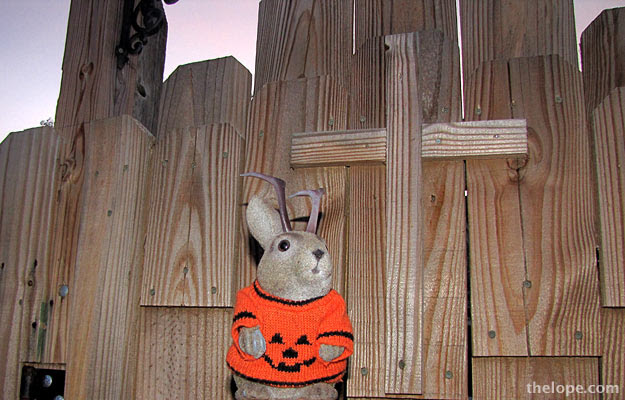 Nosferatulope, understandably would not participate in this photo so Ace took his place. 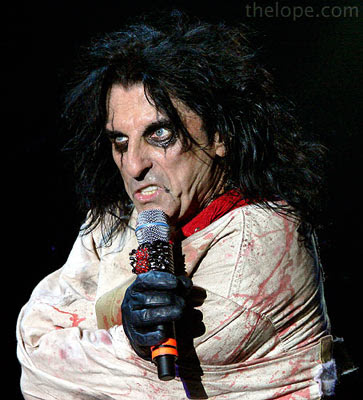 In another touch of irony, when Alice Cooper wrote "The Ballad of Dwight Fry," a song written from the point of view of an insane character similar to Frye's Renfield, Cooper dropped the "e," restoring the actor's original name. I asked him about the omission at Planet Comicon in 2018, he said "We were probably just dumb." He added "The reason we wrote that song was...Count Dracula was scary, but who was the scariest part of Dracula? Renfield. Frankenstein was scary but who was the scariest character? It was Fritz. Nobody ever gave him any credit." (Photo was shot at concert in Miami, OK, 2008.) Frye's image as Renfield turns up in unexpected places. Here he is painted on the side of a carnival attraction at the 2009 Iowa State Fair. A company called Sideshow Toys even made 12" action figures of Frye as Renfield and as Fritz a few years ago.

Thanks to the folks that helped me with research on this post: Sharon Scott for finding the 1900 census; John Burger, Assistant Planner Development Services/Planning Division for the city of Salina, for sending information on the Sanborn maps; Linda Taylor and Cloie Brevik for records research and checking Salina land abstracts at the Smokey Valley Genealogy Library; Barbara at the Salina Public Library and various folks at the Salina city and Saline county offices who courteously answered questions or sent me to someone who could.

(Legal stuff: The screen capture of Frye from Dracula is used in an informative manner, constitutes a minute fraction of the copyrighted artistic work, is low resolution and thus, I believe, falls under fair use. The 1931 film, Dracula, and all images within are copyright Universal Studios.)

posted by Ace Jackalope at 7:50 PM

Well done. I probably learned more than most since I didn't even know of the Renfield and Fritz connection.

Just found this fantastic article while searching for some information on Dwight. I'm a HUGE fan of the man and have always been curious about his childhood because there is very little about it in DFLL, not even a photo so this is amazing. I know the Fry's (without the "e" at his point) moved to Denver when Dwight was still an infant but I am unsure when exactly this was.

I hope you don't mind me sharing this with my Dwight fan forum on proboards. I am sure many of his fans would appreciate your research.