The Lope: On Race and the Authority of an Older Brother

On Race and the Authority of an Older Brother 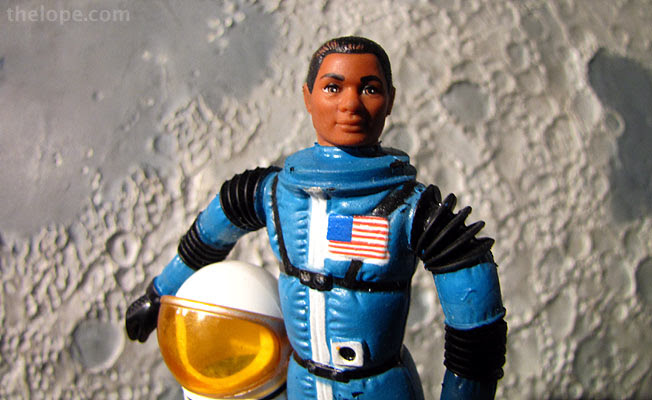 Meet Jeff Long, The first Black man in space. Well, at least he was the first Black astronaut at the Joplin, Missouri, house in which I grew up.

1969, probably Autumn: I am seven years old. My brother, Steve (older by four years) and I are in Toy Town at the Eastmoreland Plaza shopping center, 7th and Illinois, then a lively center of mid-century shopping.

Our mission at Toy Town was to recruit a new astronaut to replace Major Matt Mason and Sergeant Storm, both retiring due to broken wires in their joints. I'd had my eye on Doug Davis, a Caucasian astronaut in a perky yellow suit. I'd probably seen him on TV.

Problem was, Toy Town was out of Doug Davis and had only the Black astronaut, Jeff Long, in his nifty blue suit.

Now, at seven, I was a white kid who didn't know any Black people. Most of what I'd heard of other races was from the kids across the street, and it wasn't good. I didn't lend those kids much credence, but still, I wanted an astronaut that voyaged to the moon from within my comfort zone - one that looked like me if I were adult and had a cool space suit.

Pondering the dilemma, Steve chimed in with something like:

"Black people are just as good as white people."

It sounds so obvious now, as epiphanies often do in retrospect.

I believed Steve; his word was absolute fact. And so we marched out of Toy Town with astronaut Jeff Long, who had a long and distinguished career on Connor Street. 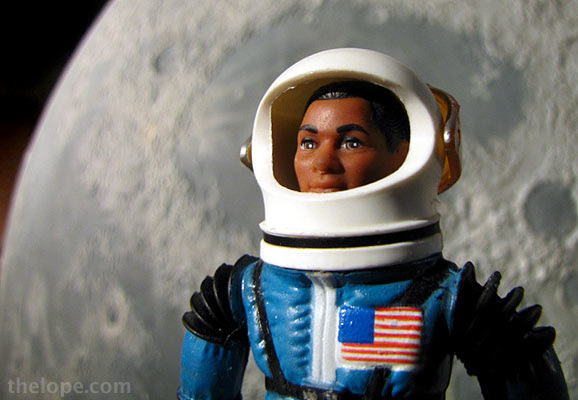 It was Jeff Long who wore the moon suit in our lunar-like attic insulation, drove the Space Crawler in front yard snow (the thing still works!) and fired the mighty Firebolt Space Canon into the backyard woodpile, fending off invisible foes.

Eventually, Jeff Long fell apart and the Matt Mason line of toys died out with American ennui over the space program. Toy Town is long gone and even the building was razed a couple years back. Plastic and wire are not as "forever" as one would think, but on this last day of Black History Month I ponder what does last: the wise councel of an older brother.


(Thanks to Jeff Killian for the loan of a Jeff Long action figure and to Keith Meyer for clarification on the toy's release date. The backdrop is a plaster half moon at the Cosmosphere.)

That is a really neat story. Thank you for sharing it.

Christmas of 1970...the seed was planted to mold a young mind to one day become an engineer...all because he got a toy that helped build his self image...

Thank you for sharing such a wonderful experience.