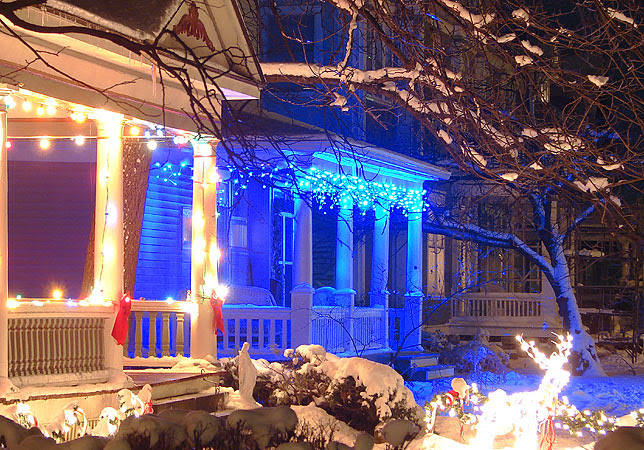 Since LED Christmas lights debuted on the market a couple years ago, I've wondered how they'd photograph alongside incandescent lights. Now I know. These houses are in the Houston Whiteside district of Hutchinson, Kansas. 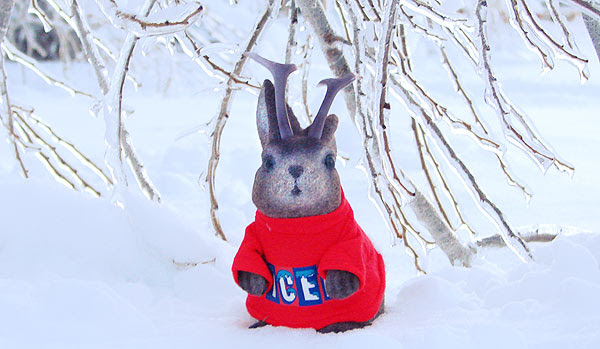 The branches behind Ace are actually the top of a 12-foot tree fully bent over by ice. It eventually lost enough ice to snap back rather suddenly and took a nice little chunk out of the edge of my porch roof in doing so. Nevertheless, the lingering traces of snow and ice offered some fine opportunities. 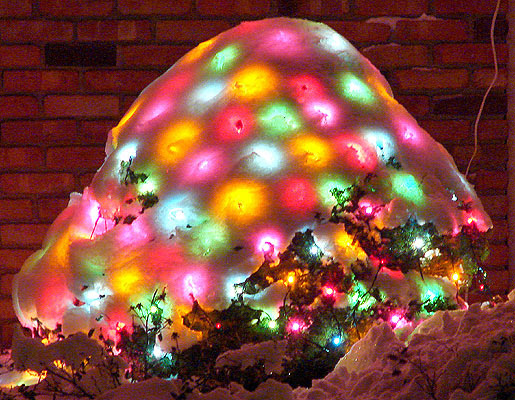 For example, back lit snow. This shrub reminded me of a party light ball. By the way, when photographing Christmas lights, I find it helpful not only to set the camera's white balance to incandescent, but to remove much of the yellow and a bit of red in Photoshop in order to restore the appearance of the scene to the way it looked to our ever-compensating brains.


We see a scene like this as a group of lights that contains strong blues and greens, but since the light bulbs themselves are incandescent and of a very low (very yellow) color temperature, they photograph not as we perceive them but exactly as they are - yellow lights with glazes of other colors that seldom really overcome all that yellow and result in well-saturated cooler colors. In film photography we'd have used filters when shooting, and/or color compensation in a home enlarger or photo printing machine. These days, with digital cameras and photo programs, we have it much easier. 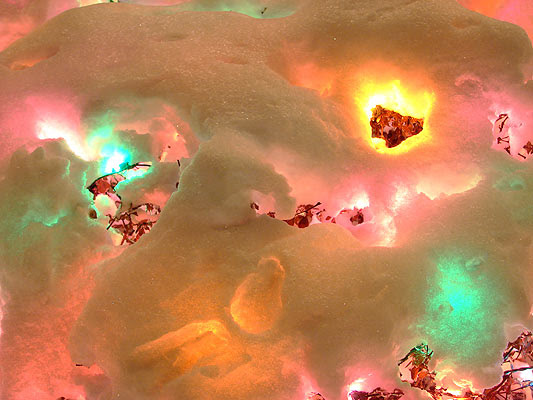 Does anyone else see a face here? 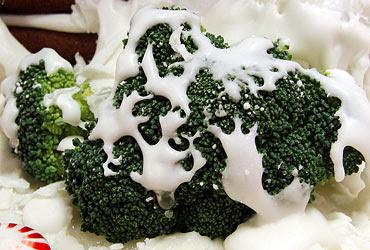 This snow is icing on a broccoli bush. 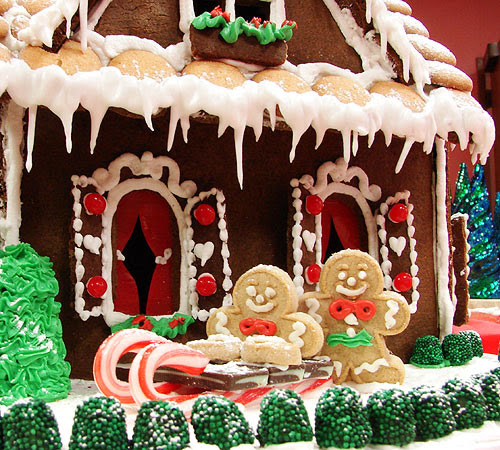 These gingerbread houses were part of an exhibit at the Reno County Museum. This one was made by Mae Yoder. 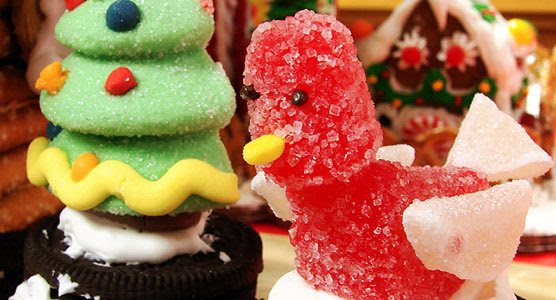 These two are part of a scene by Amy Sallee. 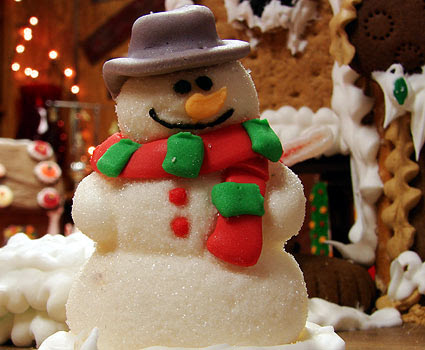 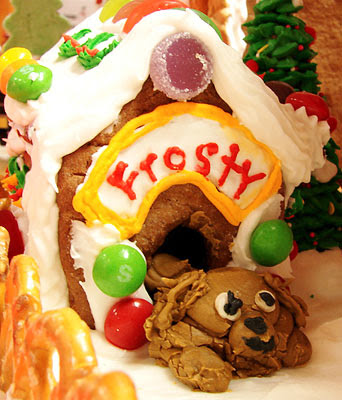 This is part of a scene by Paula Vogel. 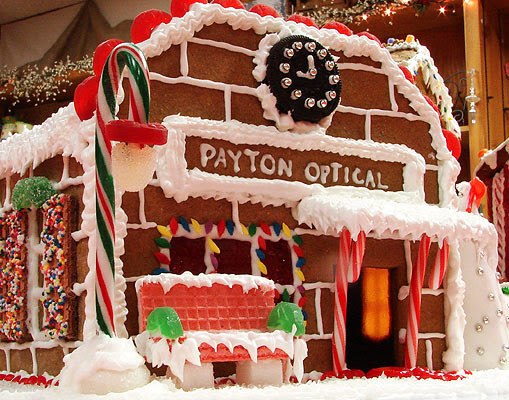 Patti Sears made this one. 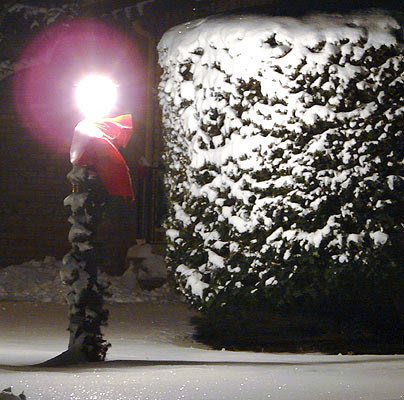 Back to full-scale and from frosting to snow. This is in a housing development in northern Hutchinson. 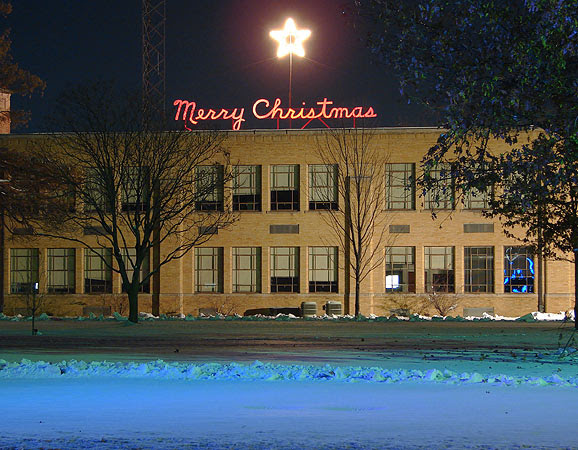 The blue light on the snow in front of Hutchinson Community College comes from a blue advertisement on a new electronic sign nearby. 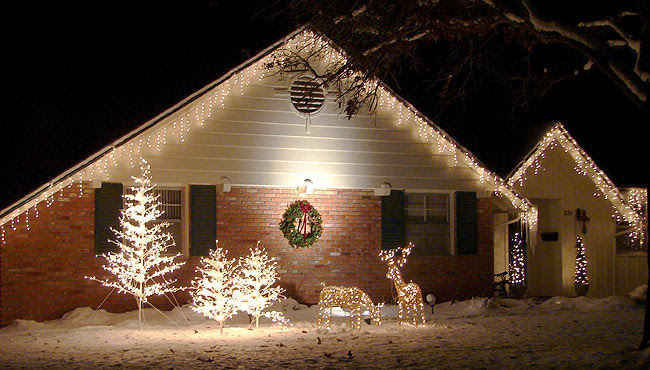 I normally like a lot of color in Christmas displays, but I liked the angles here.

I'm fond, when visiting my mom at Thanksgiving, of trying to ply her into allowing Christmas decorations in her house earlier than she'd like. Some years ago, I came up with the ploy of pointing out other people's early displays and saying "your neighbors love the baby Jesus...(make sad eyes) don't you?" 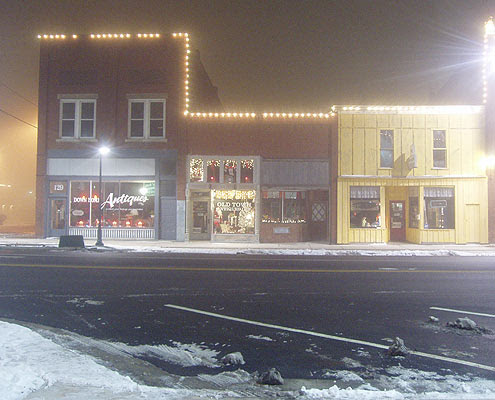 This photo is actually from December 1 of 2005. I found it in my archives and liked the fog.

posted by Ace Jackalope at 3:07 AM