The Lope: Before it was Ground Zero

Before it was Ground Zero 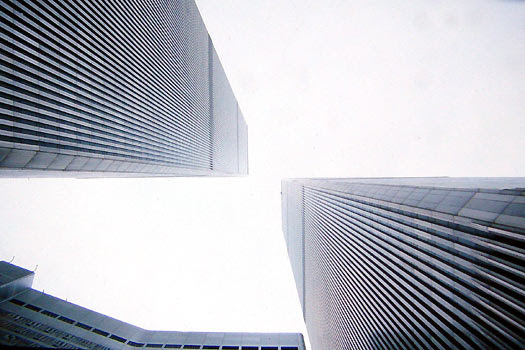 One summer in the early 1980's, I went to New York with a friend and we stayed with his family. It was my first time away from home for any amount of time. Though they lived on Long Island, we drove into the outer part of NYC and took the trains and subways into the city. Of course, the World Trade Center, also known as the "Twin Towers" or 1 WTC and 2 WTC, was one of our stops. 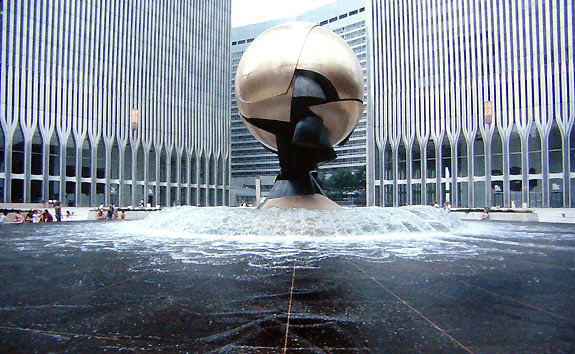 There were sculptures in the plaza below the buildings. This one was called "Sphere for Plaza Fountain" and was made by Fritz Koenig in 1969. Water flowed from the black granite base of this bronze sculpture. It was intended to symbolize world peace through commerce, which was also the theme of the World Trade Center.

If this isn't irony, I don't know what is. Here's a link to a Port Authority photo of Sphere for the Plaza Fountain after the 2001 terrorist attack. 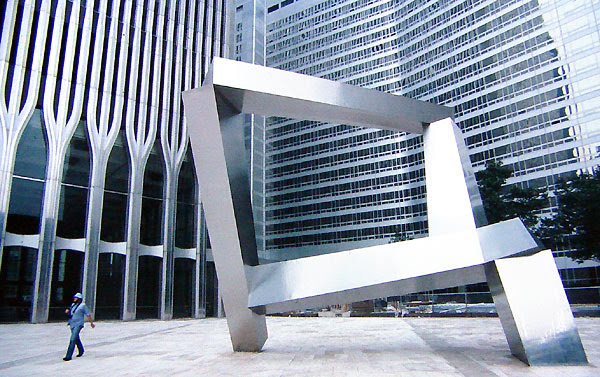 This was James Rosati's "Ideogram", a stainless steel sculpture from 1971; it was often used as a background for fashion shoots. That's my friend, Ray Brown, walking at left. I was never really taken with the sculptures, or even the buildings, but I did like the three-pronged design of the facades. 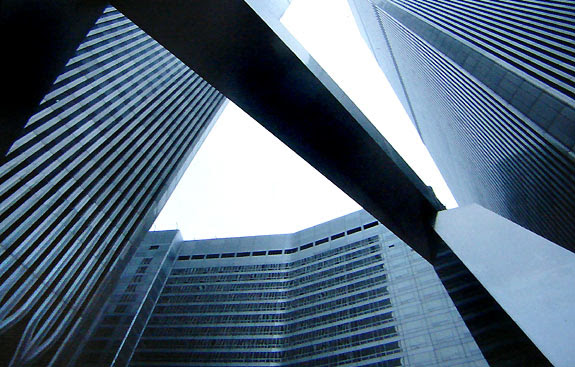 These are slides - Ektachrome 200, mostly - and they are very blue and cyan. This was a bias of that film, and it's gotten worse with age. My Kodachromes have fared better. 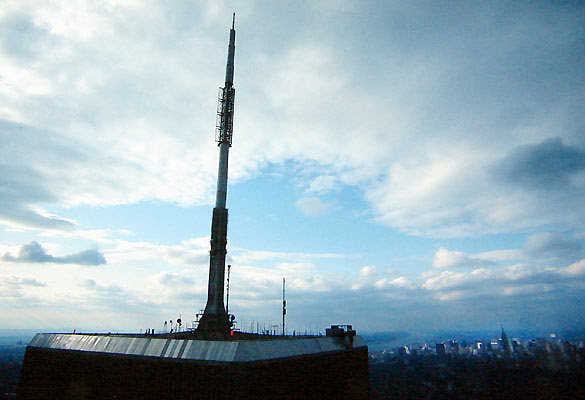 This was the view of the north tower (1 WTC) from "Top of the World", the outdoor viewing platform on the 107th floor of the south tower (2 WTC). The buildings below and at right show just how high we were - 1,377 feet. Looking at these photos, I find myself astounded that something that big could be taken down so easily, until I remember that its very mass worked against it. 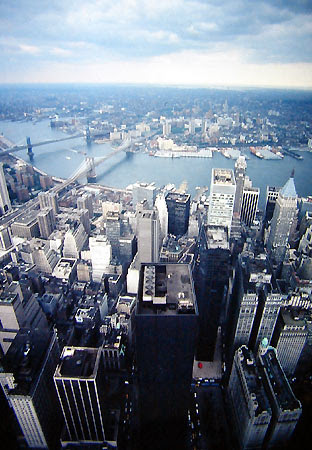 In a more innocent New York, all we were afraid of were the muggers. 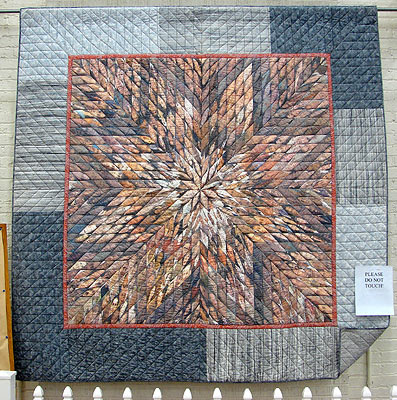 This year at the Kansas State Fair, you can see Ground Zero, a quilted tribute to those that died in that place 20 years after I shot the photos above. Lois Jarvis of Madison, Wisconsin, took 90 hours to make this quilt and finished it in January of 2002. She says the shades of gray are meant to capture "the colors of those days following Sept. 11, the smoke, the dust, the sadness of a city in mourning." 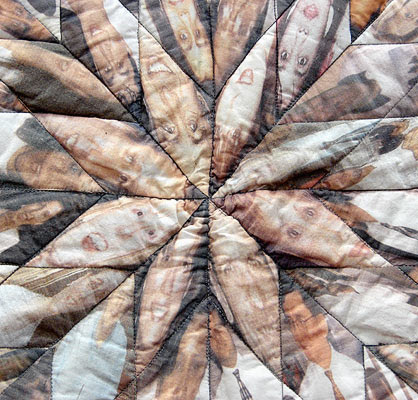 Upon closer inspection, one sees all the people. I know nothing about quilts, but everytime I run a photo of one, somebody writes with a question, so I jotted down a few facts. Jarvis says she used the Lone Star pattern because she could convey an explosion with outward movement. 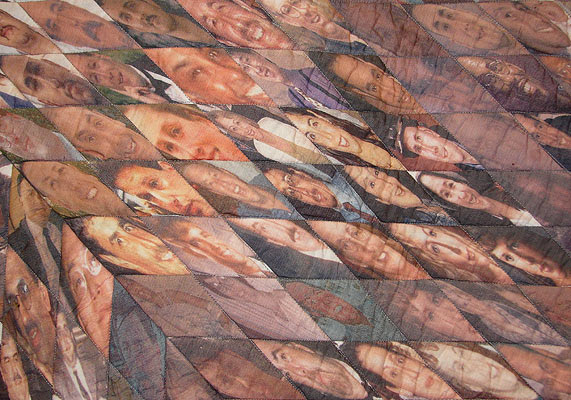 Just over 700 photos were used in the quilt, which portrays only people lost at the World Trade Center. The quilt is on display in the Domestic Arts Building. Read more about the quilt, here.

posted by Ace Jackalope at 2:15 PM

WOW Ace, thank you for the beautiful tribute to Ground Zero. T and I will be sure to look for this quilt on Friday at the fair.

Your photos are beautiful. How strange to see this place of violence before, the way it was intended, peaceful fountains and all.

And the quilt is amazing. Glad it's on display and not just hanging in a house somewhere.

Cow was rather surprised at the lack of notice this year's anniversary seemed to have. It's good to see the Lope posting this on the day.

Took me a while to figure out the Jackalope theme. That's what you get for writing late. And I LOVED you pics of the WTC. Having never been to New York, you wouldn't think I'd miss buildings I never saw but for movies, but whenever I saw movies, pre 9/11, I saw the towers.

New York's spirit proved to be stronger than the steel of those buildings. That anyone survived after being buried underneath all that is a testament to determination, come what may!