The Lope: Waiting for Bill 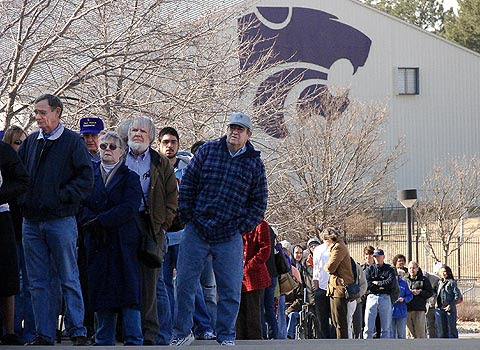 Last Friday we had an impromptu adventure. We found out the night before that tickets for a Landon Lecture Series speech by Bill Clinton at Kansas State University would be handed out Friday morning at 10. The catch was that they'd only be handed out at K-State - no Internet or mail distribution - so we had to drive about two and a half hours up to the campus in Manhattan, KS. That big cat symbol on the building in the background is the "powercat" a symbol of the university. I was informed of this rather enthusiastically when I asked a group of K-state alumni what a "powercat" was.

We got there before 8AM and were nearly the first in line, as seen in this photo of perfectly ordinary people waiting in the cold wind. Why endure it? Because I'd never seen a president of the United States, former, future or current, and Clinton is one of my faves. We do get our share of former world leaders in these parts, having seen a visit from Gorbachev in 2005. 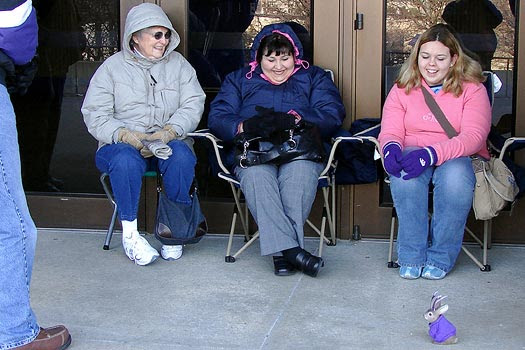 As usual, Ace got along with the ladies. Notice the purple shirt he's wearing in order to blend in? That's the main color of K-state. After obtaining the necessary tickets, we went sight-seeing. What did we head to first? Well, we fell back on jackalope travel rule #22, always check out a town's giant something-or-other. In this case, it's Johnny Kaw constructed in 1966 to illustrate a Kansas mythological figure created in a 1955 story by George Filinger for the Manhattan centennial. 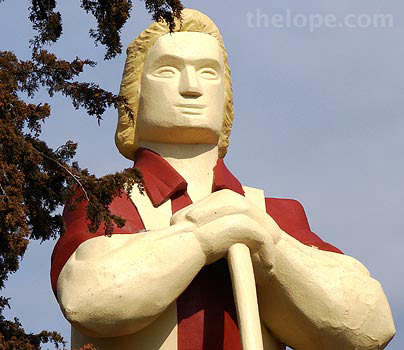 This Johnny Kaw has fared better than the first statue of him that was placed here. That first statue was beheaded by vandals, then moved to a farm where it was backed over by a wagon. I wonder if Paul Bunyan ever had these problems? 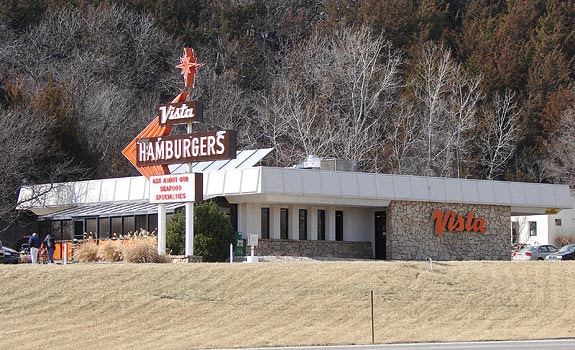 We didn't explore Manhattan thoroughly, but we did happen across this gem. It's
the Vista Drive In at 1911 Tuttle Creek Blvd. The name "Vista" derives from that fact that when the place was started in 1964, there was a nice view of the fields from this hillside. Of course, those fields are developed now. This is not the original Vista building or sign; I don't know when these were built.

Some of the shapes, type styles and materials used, like the fake stone sides, reminded me of mid-20th century "googie" diner architecture. I'll try to eat lunch here sometime.

I love souvenirs and shirts from specific local institutions. My problem with t-shirts, though, is they have no pockets and between the camera and the cell phone, I gotta have pockets! 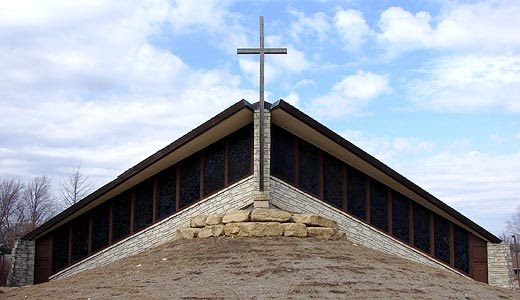 This neatly angular church is along Kimball Avenue, near the University. From the sacred to the profane, I suppose: After a brief stint through a more rural area, Highway 114 neatly segues the college town of Manhattan into the military base town of Junction City. And what have I seen outside the gates of every military base I've ever encountered? Strip clubs. I shot this one because of the old sign, the style of which leads me to believe its first owner is not the G-Spot, 1014 Grant Avenue. This is a file photo from last year, but I don't believe the sign has changed. The Korean Grace Baptist Church, 629 Grant Ave., looks like an old grocery store or strip mall with a steeple. It's more recycled signage, but it has an interesting shape. D.E.L. Motors, 1737 N Washington St., has a pair of nice signs at the corner of Grant and Washington. We turned south here, and traveled Washington for some miles as it is the main drag through downtown Junction City. One of the proprietors of Jack and Dick's pawn shop, 1434 N Washington St., had a very photogenic face, but did not want his picture taken.

However, the pawn shop guy was helpful and agreed with people at the street rods place across the street that it was once a Burger Chef. Observe the cool ceiling fixtures inside.

I love these icosahedron-shaped glass ceiling light fixtures. These lamps date from the mid 1960s. Rex's Auto Sales, 1122 N Washington St., has a nice sign as well as a banner that mentions "Little Apple" as a nickname for nearby Manhattan. I ran across a 2003 article in the Topeka Capital Journal in which a manager at Rex's is interviewed; it gives an insight into the concerns of business leaders in towns dependent on military bases. "If nearby Fort Riley were to close, he said flatly, Junction City would be a virtual ghost town," the article states. Apparently, the population of troops stationed at Fort Riley has dropped about 40% in recent years. 10,000 troops were stationed there, as of the end of 2003. This little sign was also on the lot last May. It probably still is and I just missed it this time. Williams Cigar Store in the 900 block of North Washington St. is long gone, but the sign remains over what is now a bar. I went into the bar to glean more information about the sign, but found none. However, the bartender had another one of those faces you just want to photograph - rough hewn and in good indirect lighting, too - very much a character. He seemed puzzled that I ordered a soft drink and went on to an animated conversation with patrons at the other end of the bar, leaving me near two women who were discussing friends of theirs who were on parole. 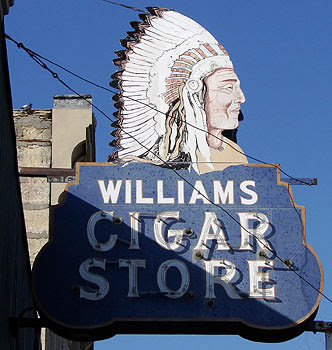 I'm not a bar person, save for tiki bars, but I was willing to deal with the cigarette smoke for awhile if I could get the shot I wanted. But when other patrons kept looking uncomfortably at my camera, I felt my own naiveté and remembered that sometimes people in little hole-in-the-wall bars in the middle of the day don't like to be seen, as opposed to tiki bar patrons who are often out on the town with cameras of their own. When one of the women remarked that my camera must be expensive, I walked back into the fresh air and sunlight. Maybe I should have brought Ace inside as a conversation-starter to get the bartender's picture. I can hear it now: "A man and a jackalope walk into a bar..." 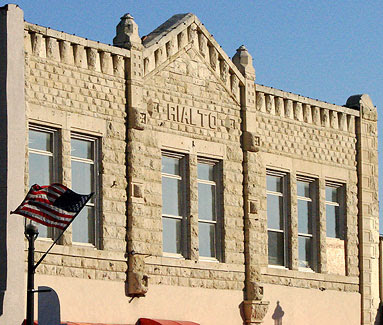 The urban archaeologist and the history buff enjoy guessing at the original purposes of such buildings. But, oh! How my space-age baby boomer heart leaps when I see an echo of that much-later Jetson-esque era in some unexpected place - bits of "googie" architecture in the bread basket of America. Just over in the next block south is the cryptic tower of Masonic(?) emblems. I've always thought of these as suburban totem poles, inscribed with hieroglyphics. Sometimes eras overlap, as in this likely mid 20th century sign for Tom's Mens Wear on much older buildings. 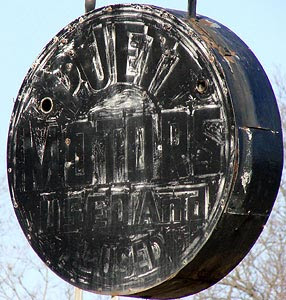 Somewhere on a side street near downtown, I shot this aging sign for Puett's Motors. Sometimes I find unexpected things when I google the various places I've photographed in preparation for these posts. In this case, I found CNN trial transcripts for the Timothy McVeigh OKC bomber trial, in which a former manager of Reich's testified as a witness to events in Junction City (the motel manager was not involved in the bombing).

Way on down Washington Street, at 835 South Washington, I saw the Big Bowl bowling alley. 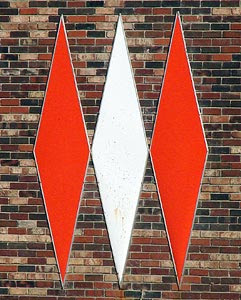 I've seen these elongated trapezoids before on signs and on furniture. I'm not sure of the era...1960s?...70S?

The nearby Denny's Restaurant at 1032 South Washington sports a later generation of Denny's architecture than I usually see. There were too many big trucks in front of it to get a decent picture, so I shot the back since the shape of the roof was what I was after. I'm no big fan of Denny's food, but they've left some great buildings behind. Here's a link to an earlier Denny's building I shot in Needles, CA.

I turned east from Washington St., right before it peters out near I-70, and drove along an access road which is the old Hwy 40 in some places. Stacey's Restaurant, 118 W Flint Hills Blvd., is actually in the very small town of Grandview Plaza, right next to Junction City. I found a nice description of the food and decor at Virtual Tourist.

The Dreamland Motel, 520 E Flint Hills Blvd., was built in 1950 and is quite visible from I-70, the interstate that replaced Hwy 40 in Kansas. Flint Hills Blvd. is the name for Highway 40 in this area, which runs just yards from I-70 at the Dreamland. The Dreamland also played a role in the OKC bombing, through no fault of the owner or management; Oklahoma architect Dan Harris was hired to make a model of it for use in illustrating the movements of McVeigh and his rented Ryder truck. The transcripts indicate there was even a model of the sign. As dark as that chapter is, I must admit to wondering what became of the model and how accurate it was. The star-shaped sign was built in 1958, according to the woman working the desk. Notice the generic block letters that spell "motel." They are replacements used after the original letters on this, the west side, were damaged by hail in recent years.

The east side still has the original letters. See the difference in the type style? Also note the "pray for our troops" message on the marquee, a reminder of the nearby Fort Riley Army base.

This photocopy in the lobby is of a photograph dated 1950. You can see that the stone pedestal was in use then, but the star had not been added. Barely visible is some lettering under the word "motel" that spells "Dreamland." That original 1950 "Dreamland" lettering was saved and is in use above the motel lobby. Now that's urban architecture conservation the way I like to see it. Changes were made and the owner got a splashier new sign in 1958, but thought to keep and use one of the 1950 sign elements. If I ever need to stay in Junction City, I'll likely be here. After photographing the Dreamland I headed back onto I-70 and home. And what of our original purpose in going to Manhattan? Bearing in mind that Ace must disguise himself to fit in wherever he goes, we came up with this Clinton Foundation t-shirt. I doubt he'll attract even a glance. I very much doubt we'll get a chance to take a picture of Ace with Clinton; but we'll let you know how it goes.

posted by Ace Jackalope at 9:25 AM

Enjoyed this after doing a little nostalgia based search on Google for the Burger Chef in Junction City, KS. We lived a few weeks in the Dreamland Motel while waiting for quarters at Ft Riley when a kid in the early 70s. And yes the one building was a Burger Chef and as a 7 yr old, I loved that place. We then lived in Manhattan until about '78. I've been out of Kansas since '78, so thoroughly enjoyed the photos on here. Thank you for sharing them!