The Lope: A Tale of Two Diners

A Tale of Two Diners 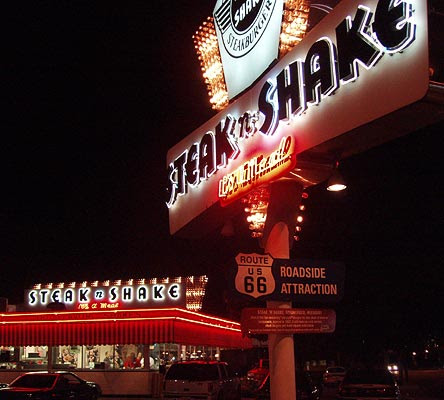 Sometimes life juxtaposes things right in your face. No sooner do I lament the probable fate of Tulsa's Metro Diner than I read a Springfield News-Leader article, courtesy of Route 66 News, which contains good news about another fine Route 66 diner. 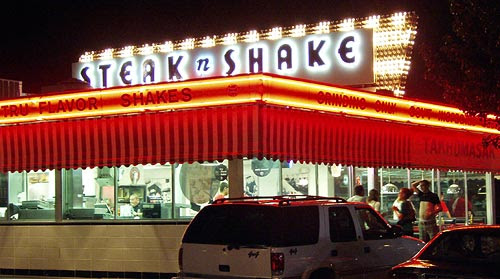 The National Park Service has nominated the Steak n' Shake on Route 66 in Springfield, MO, to the National Register of Historic Places as part of its Route 66 Corridor Preservation Program. 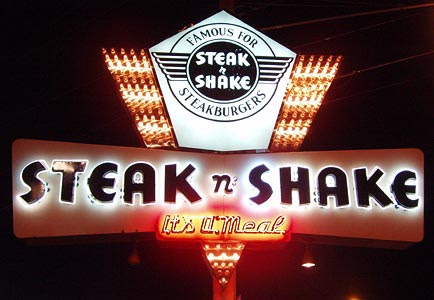 This particular Steak n' Shake, at St. Louis Street and National Avenue, was built in 1962 and is one of only two in the chain that still have the vintage 1950s and 60s design. One element of that design was this huge neon and flashing light sign.

The rooftop neon signs and the curb service window and counter (seen on the left) are two of the restaurant's original features, according to the News-Leader article.

This painted wooden sign overlooking the southern end of the parking lot is another of the place's vintage features. If owner Gary Leonard, who's family built the restaurant, fills out the necessary forms for the register, and is accepted, his restaurant could be immune from problems like road-widening projects and could also gain funding and tax benefits. However, the News-Leader article indicates he may not want the complications of that. 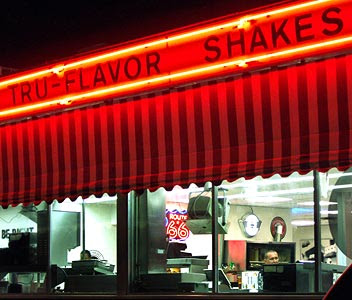 The neon Route 66 sign is about as flashy as the inside of the diner gets.

I don't recall any Elvis, Marilyn or James Dean posters here; this is a working diner, its emphasis on service and utility. The nostalgia comes naturally through the architecture and signage.

"Takhomasak" is one of Steak n' Shake's catch phrases. I've seen it imitated in newer restaurants as far away as Hutchinson, KS. "In Sight It Must Be Right", referring, I suppose, to the fact that you can see the food prepared, is another one. 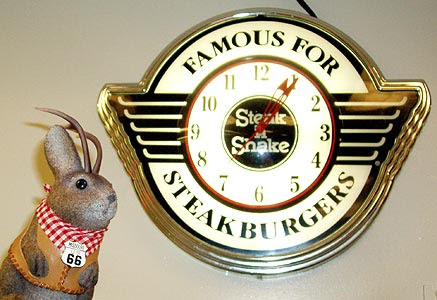 We last visited the St Louis Street and National Steak n' Shake about three weeks ago on a jaunt with friends across Rt66 in SW MO. According to the history page at the company's website, Steak 'n Shake was founded in 1934 in Normal, Illinois. We passed through Normal about a month ago and, though it is still listed in older guidebooks, that store is now gone. 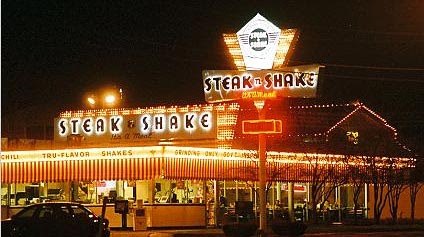 The owner of the St Louis Street and National location, Gary Leonard, also owns the other Steak n' Shake that retains the original 1950s and 60s design. The photo above shows that location, 1550 S. Glenstone Ave in Springfield, MO; it was also built in 1962. My lovely significant other and I have had many a late-night meal here. For years, there was a waitress who remembered our "usuals" even though we were only there once a month or so. 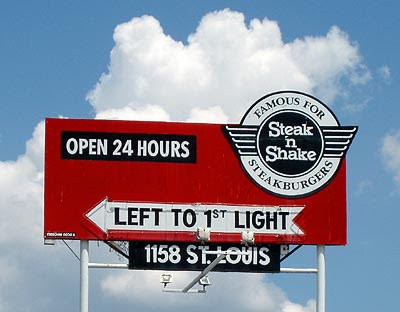 "Open 24 Hours"...that's such a beautiful phrase to anyone who likes to stay up into the wee hours shooting pictures of neon. This billboard for the St Louis Street Steak n' Shake is on Glenstone, right across St Louis Street from another Route 66 institution, the Rail Haven Motel.