Donald's Servateria has been in business in Pratt, Kansas, since approximately 1952. Recently, the restaurant sold to Jim and Sue Byers, who tell me they bought it to keep it from going out of business. I applauded their decision by having breakfast and lunch there. They tell me they may change the name of the business, and therefore, modify the sign. I sincerely hope they leave this classic the way it is. 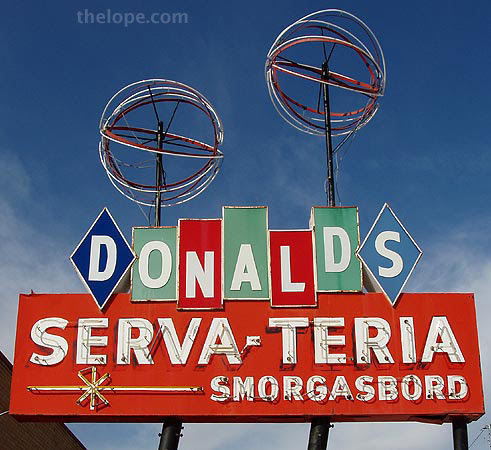 The sign is a nice example of "googie" - the name given to a style of architecture and signage popular in the 1950's and 60's. The name comes from the now-defunct Googie diner in Los Angeles, where this futuristic style once predominated.
One of the characteristics of googie was an optimistic embracing of the atomic age; this is evident in the atom-like neon pieces atop the sign. The sparkle-like shape seen next to "servateria" on the sign was also a common motif. The differently shaped letters, their arrangements and their colors also contribute to the retro look of this sign. 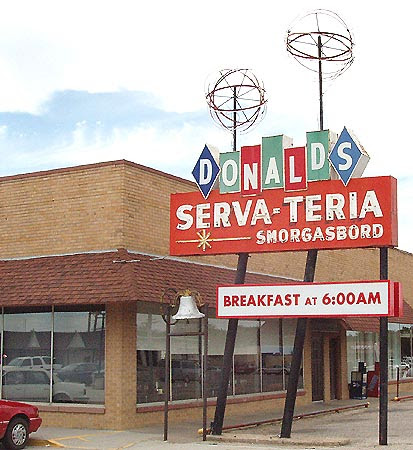 Inside, Donalds does not look like a mid-20th century business, in fact, the (unfortunately) painted-over velvet wallpaper makes it look somewhat older. Collector's plates have been part of the decor for decades. I just love the look of these small town restaurants. 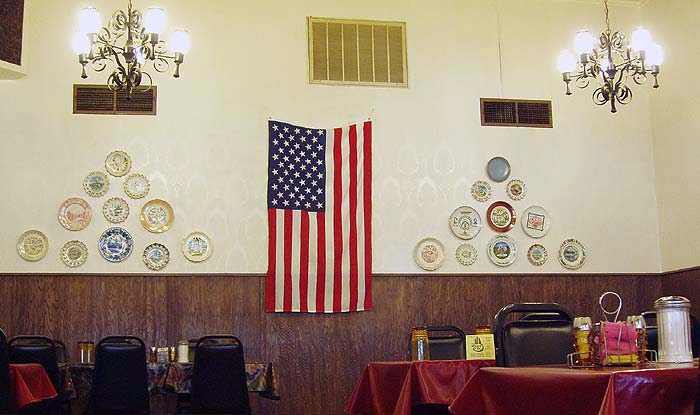 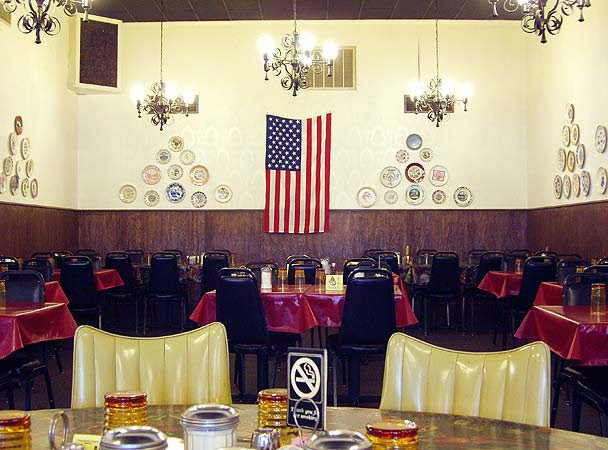 The Formica company's "Skylark" pattern, commonly called "boomerang formica" was the ubiquitous counter top of the 50's and 60's. A small patch by the cash register hints of previous, more classic decor. Its about the only thing inside that goes with the sign outside. Boomerang, amoeba and kidney shapes were often used in googie roof lines (all early Denny's had these) and signs. UPDATE (12-21-2005): The Formica company is now making the boomerang pattern again. I love the term, "Servateria"; its an early term for buffet, and I find it both nostalgic and futuristic. Donald's has a menu in addition to the buffet. The food was pretty decent but the hours are limited - Donald's closes at 2PM. The new owners tell me the place will be open nights soon. UPDATE (12-21-05): Don's is now open 6AM-9PM Tue-Sun. 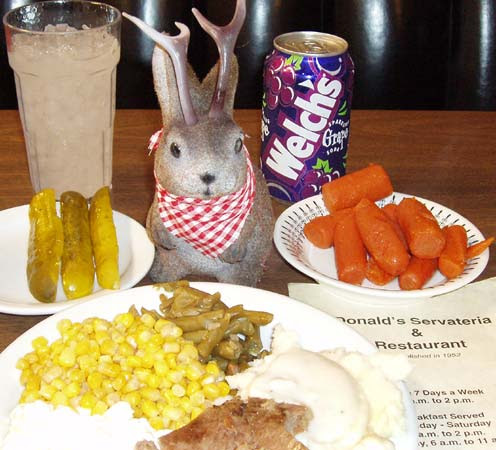 Pratt Community College, built about 1966, has a few googie touches like this roof line...

This country flavored mural contrasts the amoeba shapes in the wall. 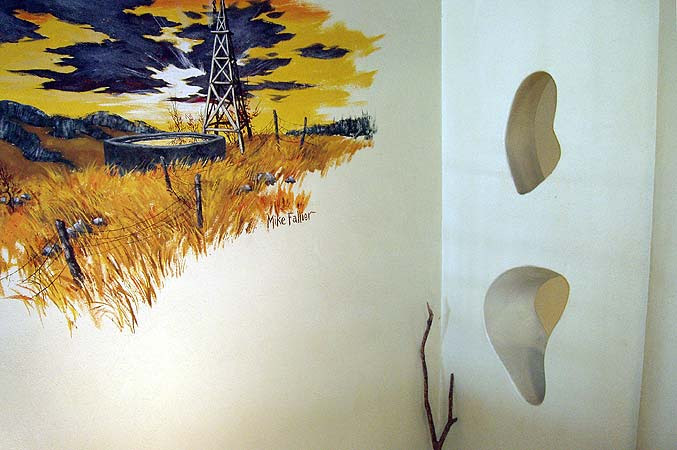 Even these shell chairs speak of a 1960's birth, particularly the fiberglass one at right. I'm sure the motel currently called Budget Inn once had a cooler name and sign. It does, however, still have these ornamental column shapes. 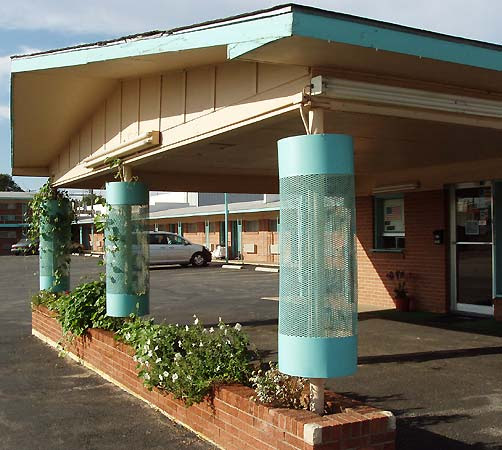 Aside from googie influences, Pratt also has some other nice bits of architecture. For instance, the Barron Theater. 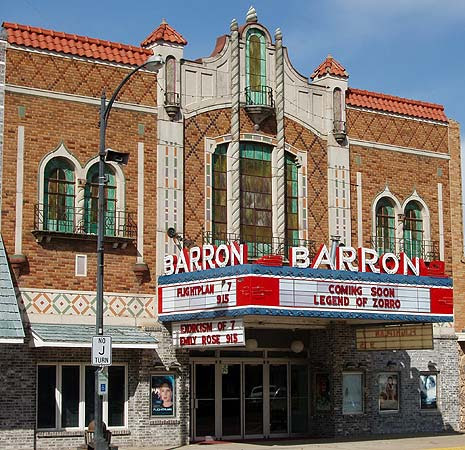 Across the street, it looks as if the Pratt Tribune was once a theater, also. I'd never seen this font used by Santa Fe; it looks rather art nouveau to me. The Pratt railroad station is now a Federal Express depot. The Ayers-Calbeck Mortuary has a cool old sign but I wasn't keen to go in and look around. I bet J.C. Foods used to be a Safeway grocery store. 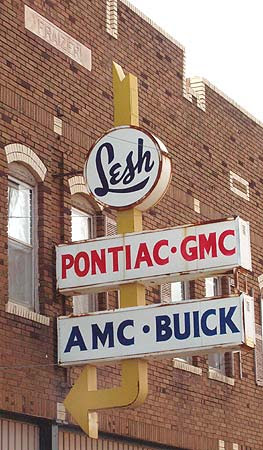 I feel ripped-off; my town only has one water tower. 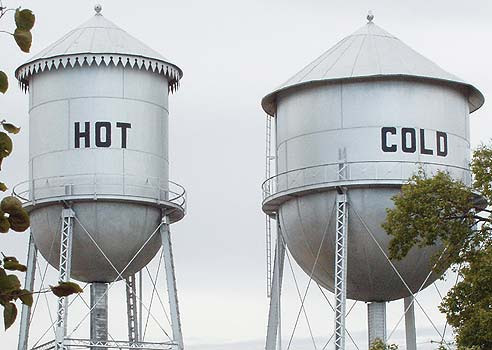 Many thanks to Della, who tipped me off that I needed to come down to Pratt for a look at Donald's.

posted by Ace Jackalope at 6:15 PM

The Pratt Tribune building was the Kansas Theater in the fifties. I used to go to the Saturday matinee double feature every week. Roy Rogers, Gene Autry, Lash Larue, etc. The concrete panels on the front were built by Jerry Weaver, our local Architect at the time, around 1960 when I graduated from Pratt High. I worked for him for a short time. Tom Webb

So, the panels were added after the theater was built? Did it, or does the Barron, look at all like the Fox in Hutchinson inside? See the Dec 18 post for the Fox.

That Donald's Servateria sign is a work of art! I hope it wasn't touched.

I grew up in Liberal, KS. We drove through Pratt many times on our way to Wichita. I remember the Donalds sign well. (Also the JuCo. buildings.)

Thought you'd like to know, this guy stole your photo and posted it on his own Flickr photostream:

You don't have to publish this, and can delete it. I just felt you should know.

Thank you very much, anonymous. I'm looking at flickr's complaint proceedures now. I assume you are http://www.flickr.com/photos/loungelistener. I've been perusing your files. Bravo! You're a talented urban archeologist and I recommend folks look at your work. I particularly enjoy the Michigan stuff as I've not been there.

After Googling "Donald's Servateria" I ran across your clever site. Thanks so much for showcasing the wonders of Kansas, and Pratt in particular. (We are eating at Donald's this morning after checking out your comments on 'googie' design!)

The Pratt Tribune building used to be the Kansas Movie Theater.

As it is now 2010 the Dons sign still stands and Pratt's history is still intact.

Really enjoyed the pictures on your site. My grandpa was Donald and owned the restaurant for many many years. My childhood birthdays happened around that table with the yellow chairs, and the plates were my grandmas. You did a really good job!

Thank you sir for your work in preserving for us such examples of an old and under-appreciated architectural style. As a young man in Australia I am especially grateful since it'll be a while before I am able to look at these in person.
Cheers.

the Donalds sign is absolutely a work of art...it should always be there