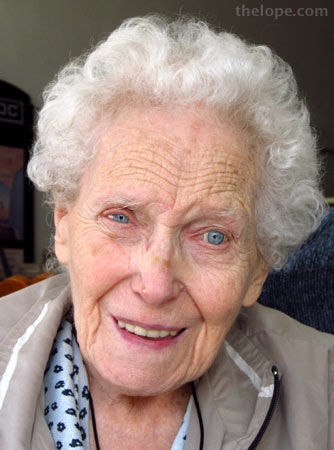 Beatrice Doane of Fredonia, Kansas, is 100 years old today, but that's not her most unique feat of longevity. 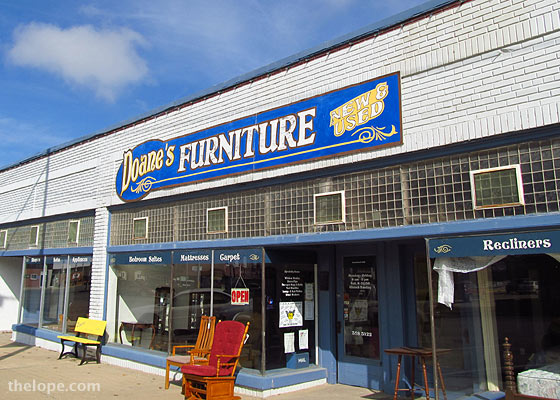 Beatrice has worked at Doane's new and used furniture store since she and her late husband bought the place in 1929. That's 81 years of employment in the same job.

I stopped in Fredonia earlier this week and asked Beatrice about this:

Her family, which still runs the store, plans to submit her data to the Guinness Book of World Records; the current record holder held a job for 80 years.

I asked Beatrice if she had any advice for people seeking career longevity:

"...friendly - that's your main thing. If you have customers you need to be friendly to 'em." 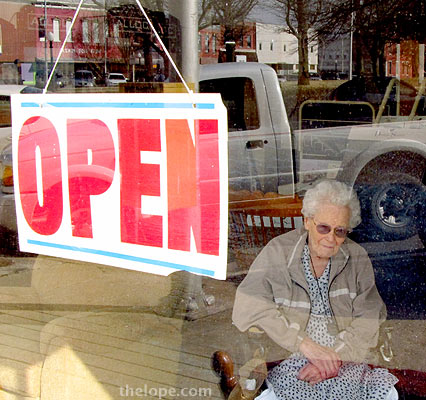 Now, we hear regularly of people who live to be 100; we hear this often enough that I suppose it could lose impact, but let's think about that span. 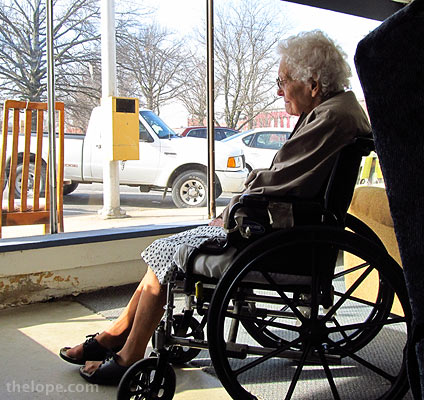 When Beatrice was born in 1911, the first commercial radio transmission and the invention of the automobile assembly line were only three years in the past. William Howard Taft was President and Daylight Savings Time didn't exist. World War I was a future event; she was six years old when the United States joined the conflict. 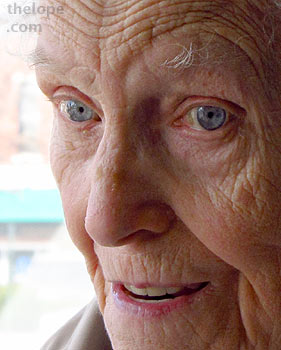 When I asked Beatrice if she had any advice for those seeking longevity, she recommended "a good clean Christian life...no drinking." It's kind of ironic that her birthday will be celebrated on St Patrick's Day. 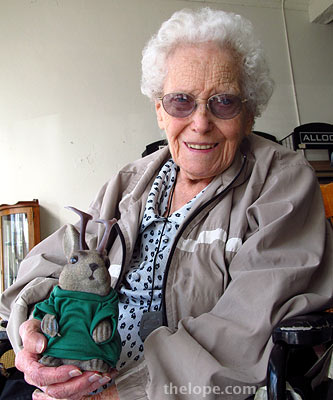 And because her birthday is St Pat's Day, Ace Jackalope wore a green shirt on the day we met her. (another photo) 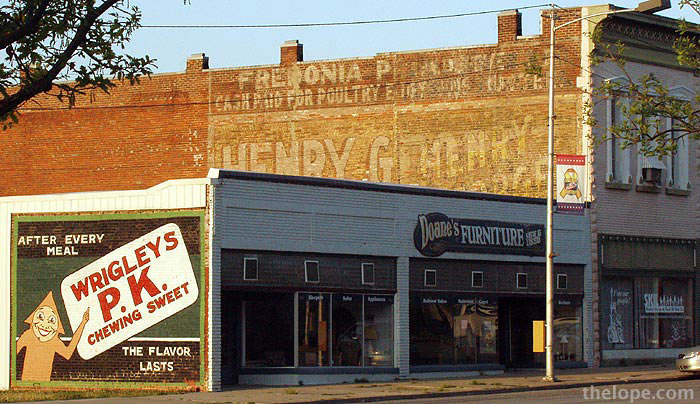 I first met Beatrice in 2006 when I was walking around Fredonia with a camera, shooting photos that I published in Star of Fredonia. My curiosity had been piqued by the revived Wrigley's mural on the outside of the building. (2006 photo) 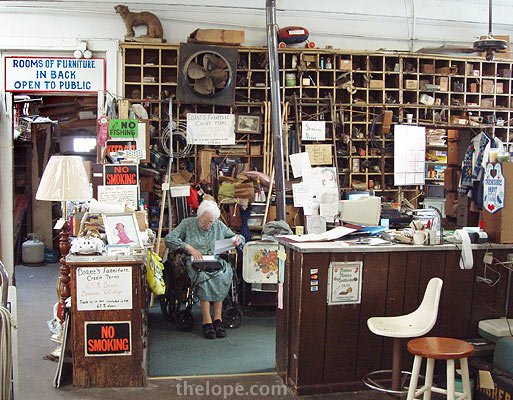 Inside, I was struck by the interesting visual cacophony. Though Doane's is primarily a new and used furniture store, there's a bit of everything in there. It kind of looks like it was once a general store and has odds and ends left over. (2006 photo) 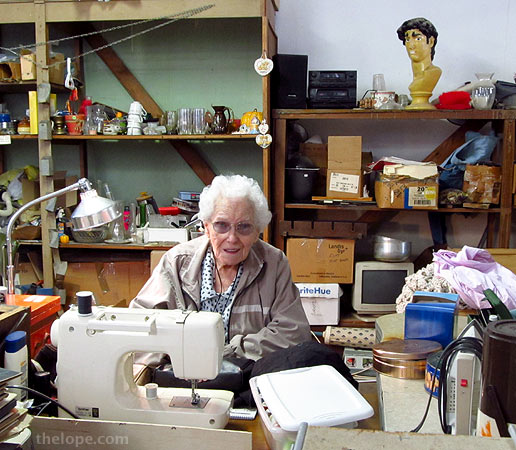 Returning a couple day ago, I found Beatrice had a work station where she makes many of her own clothes, overlooked by decades of brick-a-brack. 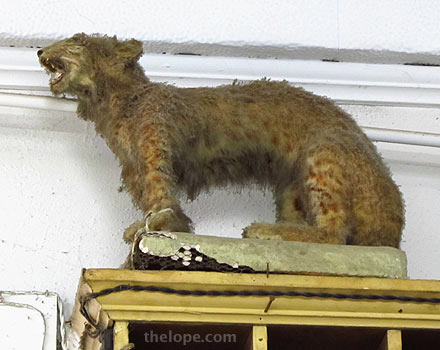 A taxidermed bobcat guards the entrance to a back room.


Her grandson, Steve Snook of Los Angeles, was visiting for Beatrice's birthday. He showed me an antique seed broadcaster:

A knight stands guard by the front door and a pedal car turned into an...well, I don't know, really...is marked with a "sold" sign. 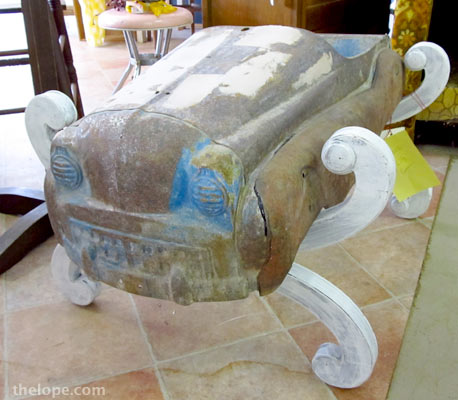 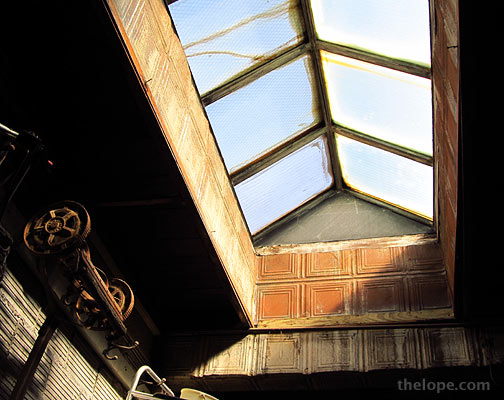 Metal ceiling tiles add character to a skylight in the back room. 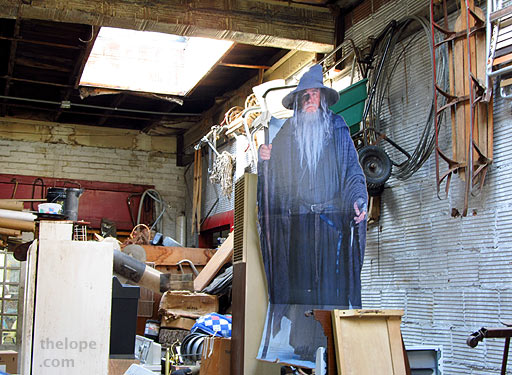 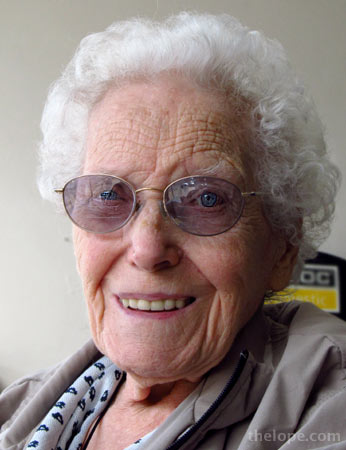 The people, places and things one finds in one's travels never cease to amuse and amaze me. Happy Birthday, Beatrice! (another photo)

Thank you Greg for the great piece on my Grandma Doane. I know that she is having a great birthday celebration today in Fredonia, Ks. I plan on posting this link to my Facebook page for my friends to see.