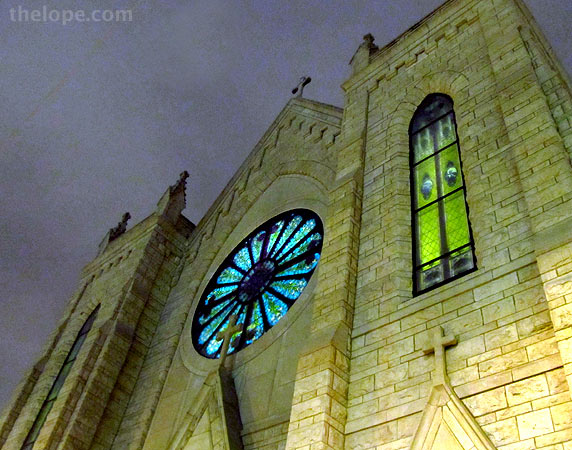 I attended Christmas Eve Mass at St Peter's in Joplin, Missouri, last night, as I have a couple times before. I do this even though I'm not a believer. Maybe it's a cultural connection sort of thing. Maybe it's a link with those I've lost. Maybe it's the beauty of a few hundred people singing Christmas carols in a decently old church. It's a bit of all, I suppose.

I'm particular (perhaps shallow) about where I do this. I need to see stone and stained glass, and have what passes in the U.S. for a sense of antiquity.

I sat in back, ready to give up my seat in case the place fills. It nearly did. A nice Hispanic couple sat in front of me. He stood, knealt and such, she just sat the whole time with head bowed occasionally, so I wonder if even believers have a consistent protocol. A man came in late and sat to my left, apologizing for smelling like the casino restaurant from which he just got off work. He didn't smell at all and it was obviously important to him that he got here. He was a fine neighbor and told me the service would be long (it was an hour and 20 minutes). 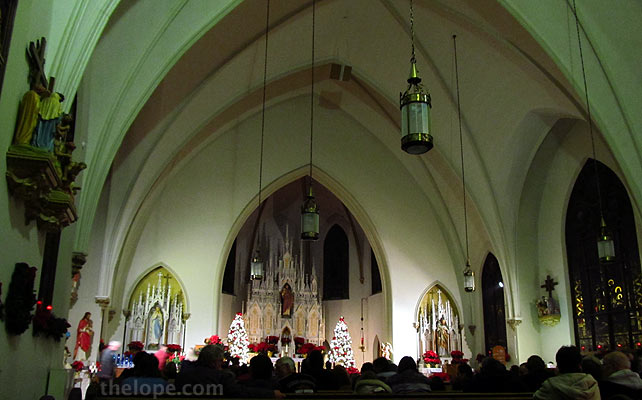 The main overhead lamps of the church were turned off before the service proper, which emphasized the vault ceiling and the Christmas trees at front very well. I smiled at the pagan trees. Carols from the choir loft had begun before midnight; they were both solemn and joyous. I found myself wishing I was shooting video to show other people how atmospherically cool this is.

Unmarked by announcement or change in activity, Christmas arrived. I knew because in a 100+ old building, I looked down at the witch in my pocket that tells time, takes pictures and lets me talk to distant people through the thin air without even wires or two tin cans.

The air was thick with incense and I tried not to think of the smoke rising about William Tyndale. The priest referenced a viral video, The Digital Story of the Nativity, and I was back in 2010. I didn't get his sing/talk narration of the traditional Christmas story, though, and I tried not to let it put me in a Monty Python frame of mind. I'll have to ask someone about sing/talk thing later.

Two women on my right had a toddler who cried mid-service and was taken out to see the Christmas trees in the foyer. I looked back though the glass foyer walls at the little girl, who was happily held up mid-tree by an equally happy mother who could still see and hear the service. Their cake was both had and eaten. 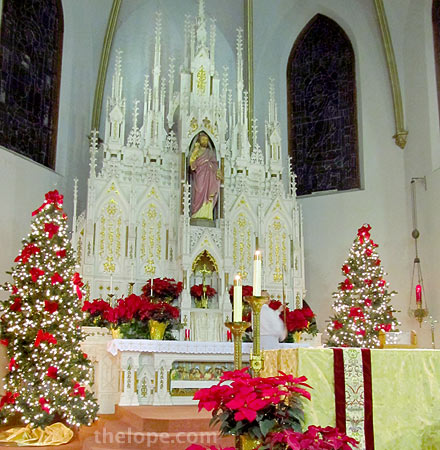 On the way out I gestured back to the church interior and told the Father I liked his office. A pleasant man, he laughed and said it wasn't bad.

I stopped and took the exterior picture, point-and-shoot braced against a light pole. I like the window but wish the place had a few well-placed floodlights grazing the front and bringing out the stone texture.

The incense perfumed my overcoat as I got in the car. It seemed sweeter than the incense in previous years and reminded me for all the world of the head shop that used to exist near here, where I bought Roger Dean Yes posters while attending Memorial High School. I guess context is everything where incense is concerned.