The Lope: The Sherlock Holmes Museum 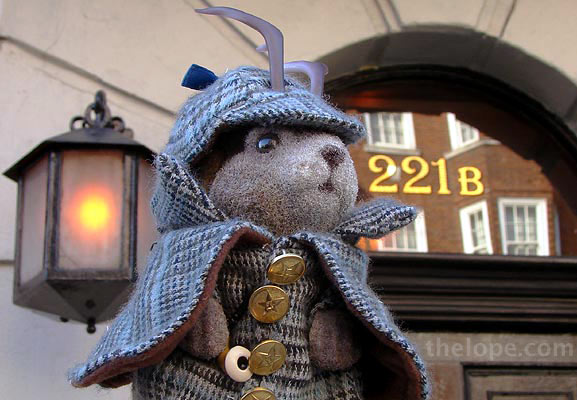 This is the 150th birthday of Sir Arthur Conan Doyle (1859 – 1930), the man who set the game afoot. I'm a fan of Conan Doyle's Victorian detective, so while in London in October of 2006, Ace Jackalope and I visited The Sherlock Holmes Museum. Join us as we undertake "The Advenure of 221b." 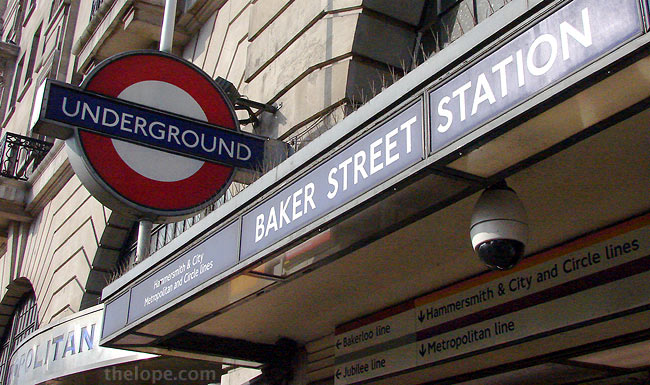 To make this pilgrimage, one emerges quite appropriately from the Baker Street Underground station. For those of you planning a London trip, this station is accessible via the Bakerloo, Jubilee, Hammersmith, City, Circle and Metropolitan lines. 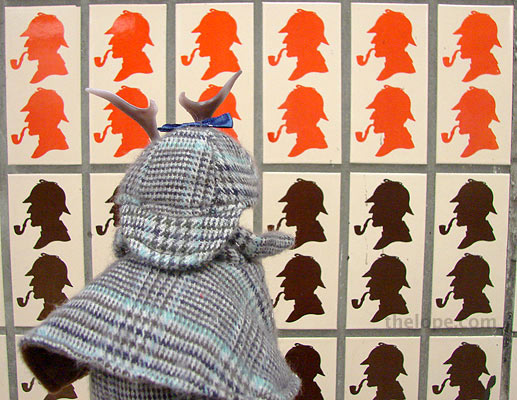 There's no doubt you've "minded the gap" at the right station, as the Sherlock Holmes profile wall tiles confirm.

The first mystery we found was the juxtaposition of a No Smoking sign with a multitude of smoking detectives.

There was nudity afoot - and it's more than the feet - in this poster for a National Gallery exhibit. No mystery here - The British are more casual about this. Remember, we're the ones descended from Puritans.

Upon leaving the station by the Baker Street exit, one happens upon this statue of Sherlock Holmes lording over his old environs. He is portrayed in the country outfit and deer stalker cap that Conan Doyle never described him as wearing. Indeed it would have been a fashion faux pas to have worn such an outfit in the city, and Holmes was described as very fashion conscious. He comes by his attire honestly, as he was shown wearing a similar outfit (in proper country environment) by Sidney Paget, who illustrated the original stories as they appeared in The Strand magazine. 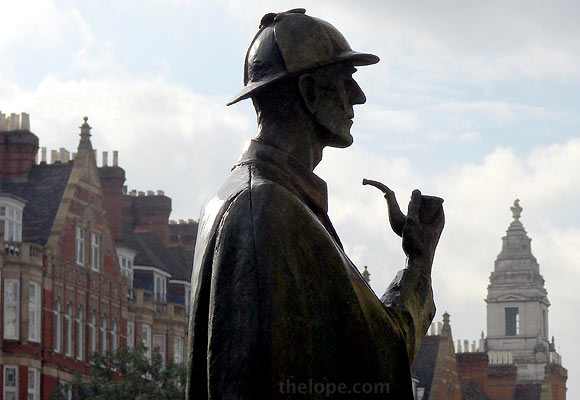 I particularly liked this silhouette, against the background of houses lining the west side of Baker Street. Look at all those chimney flues. But I must confess that all is not as it seems. This view contained an incongruous street light, so I Photoshopped it out. Here's the unaltered version. I've long been an advocate of portraying life the way it really looks - power lines, streetlights and all (even Ace is seldom "doctored") - so I thought I'd present this as a photo-illustration instead of a photograph.

The statue was sculpted by John Doubleday, was commissioned by the Sherlock Holmes Society of London and was sponsored in 1999 by Abbey National plc to commemorate its 150th anniversary. "Plc" is a British abbreviation for Public Limited Company; Abby National is a bank which was known in the 1930s as "The Abby Road Building Society" and carried similar names in later years. For simplicity, I'll refer to it as "Abby."

Here's the interesting part of the inscription: "221b Baker Street, the address of Sherlock Holmes, is at the original headquarters of Abby National plc".

Their claim is correct as far as it goes, however "221b Baker Street" only came into existence as a postal address as a result of a renumbering that occurred in 1930 - long after the Sherlock Holmes stories were written. In the Victorian era, Baker Street addresses only went into the 100s and this street was called Upper Baker Street. Some early Conan Doyle manuscripts do place Holmes on Upper Baker Street, a fact that fuels aficionado discussions as to what should be regarded as Holmes' residence. (I've listened in on arguments on this topic that make any sci-fi geek discussion of Star Trek continuity errors pale in comparison.) 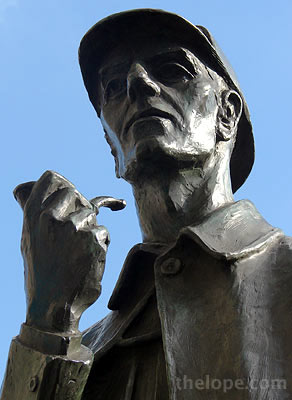 Back in the 1930s, Abby found itself the default home of Sherlock Holmes when the postal renumbering resulted in their receipt of letters to the fictional detective from all over the world. To cope with this, Abby created the position "secretary to Sherlock Holmes." A bronze plaque later applied to the front of their building carries a picture of Holmes and Conan Doyle's narrative detailing Holmes and Watson moving in at 221b. (I've seen the "b" as both upper and lower case in nearly all modern references to the address.) 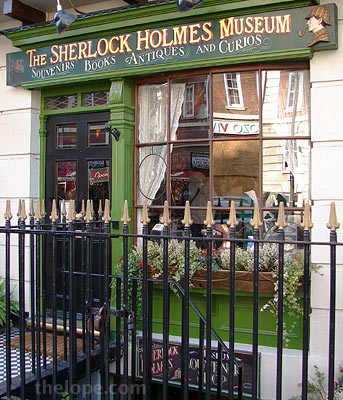 While Abby was still receiving mail for Sherlock Holmes, the much newer Sherlock Holmes Museum applied through British bureaucratic channels in 1994 for permission to renumber itself "221b", but was denied. There was still a way to carry a "221b" sign however, and the museum utilized it. 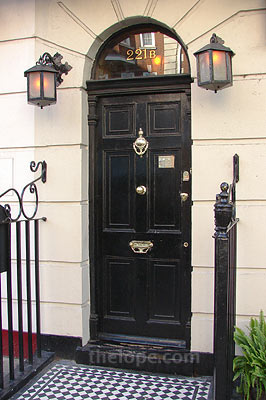 This reminds me of the American Movie "Miracle on 34th Street." I suppose if Santa lives in a retirement home on Great Neck, Long Island, than Sherlock Homes lived at The Abby Building Society and later, The Sherlock Holmes Museum. 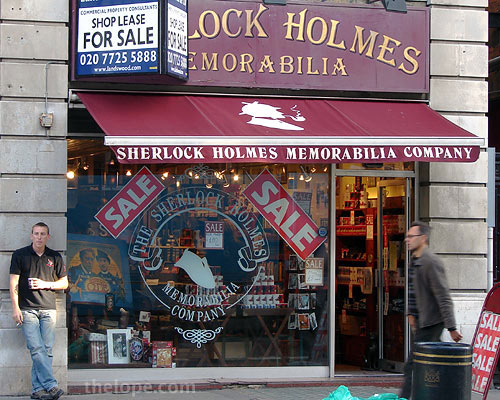 There are surprisingly few other exploitative businesses in the area. This one, the Sherlock Holmes Memorabilia Company, was for sale in October of 2006. 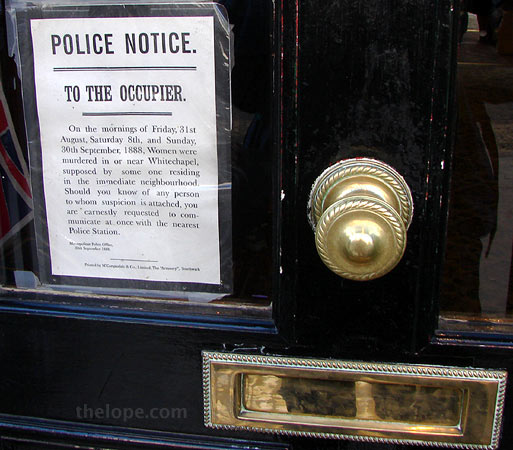 The museum tries for a certain degree of period atmosphere before you even get in the door. Here's a larger version of a police notice about a murder in the area. 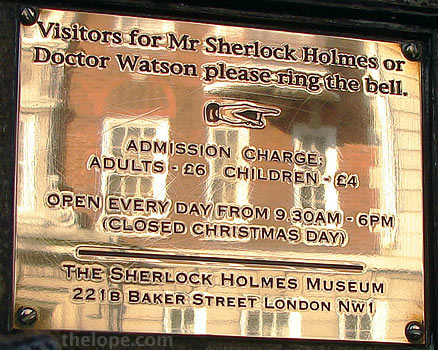 I just checked and the admission cost has not risen since my 2006 visit. 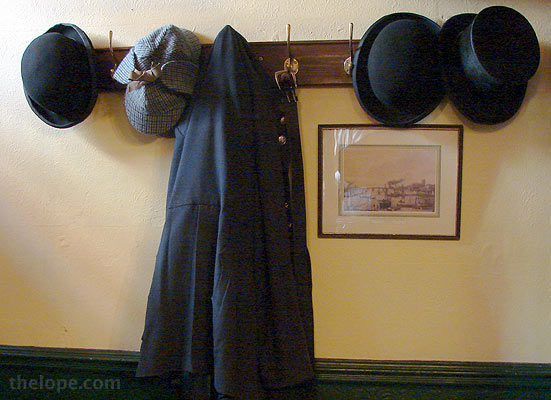 Inside, period accessories are all about. 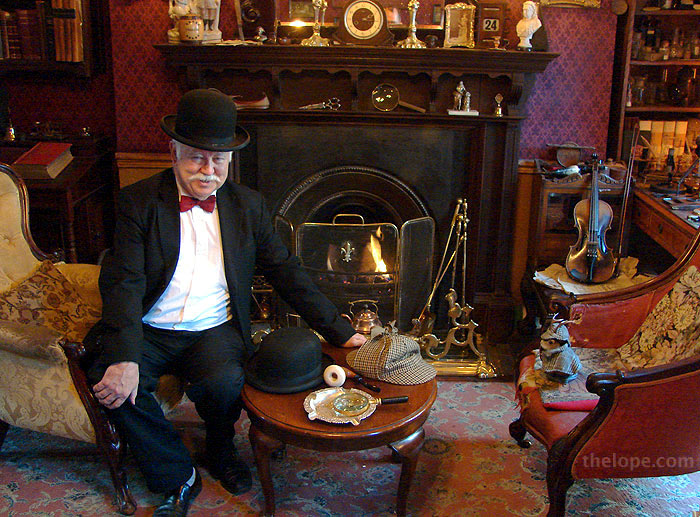 An actor identifying himself as Doctor Watson welcomes us to the sitting room.

The museum tries for a resemblance to 221b as described in the first Sherlock Holmes story, A Study In Scarlet (1887). Holmes and Watson had first met in a pub and discovered they were both seeking lodging; Watson knew of 221b. "We met next day as he had arranged, and inspected the rooms at No. 221B, Baker Street, of which he had spoken at our meeting. They consisted of a couple of comfortable bed-rooms and a single large airy sitting-room, cheerfully furnished, and illuminated by two broad windows." 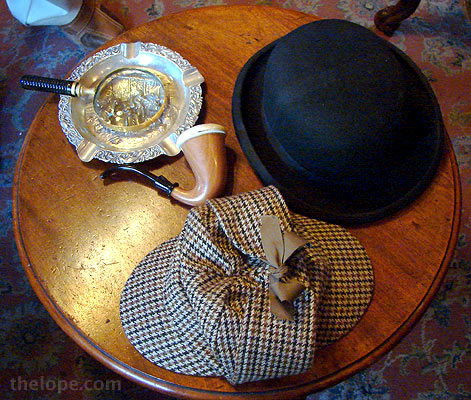 The pipe Holmes is usually portrayed as using is of the calabash design, so named because its makers originally used clabash gourds. 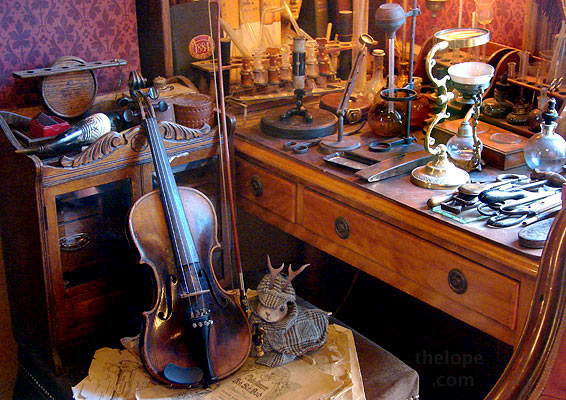 Along with Holmes' violin, the tools of a Victorian detective await a case. 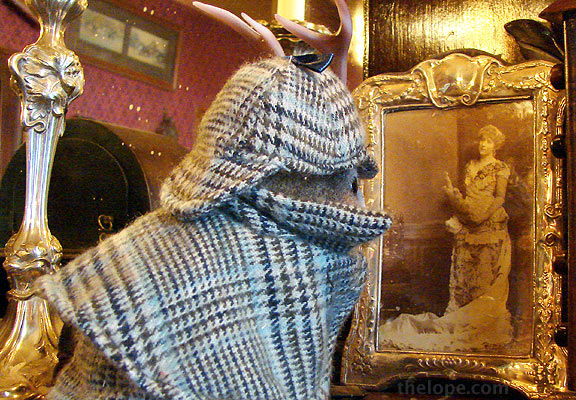 There is even a photograph of "The Woman" - Irene Adler, who out-witted Holmes in "A Scandal in Bohemia," and for whom Holmes felt the closest thing to romance he was ever portrayed as displaying. 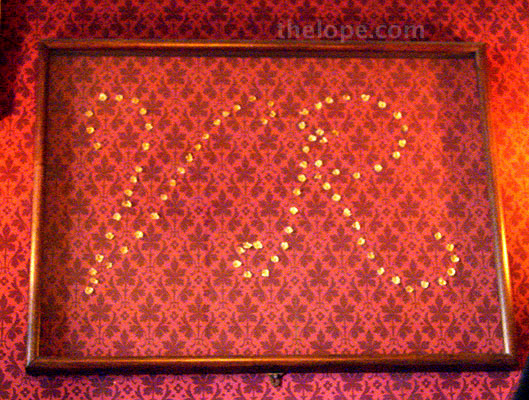 I was most impressed with this particular touch. In "The Musgrave Ritual", it is revealed that Holmes decorated the wall of the sitting room with a patriotic "V.R." (Victoria Regina) done in bullets. I don't imagine he would have made the best neighbor.

Exhibits must be changed once in awhile. In a visit back in the early 1990s, I remember a pattern of match sticks arranged in the code from "The Adventure of the Dancing Men" but our Doctor Watson could not find this for us. 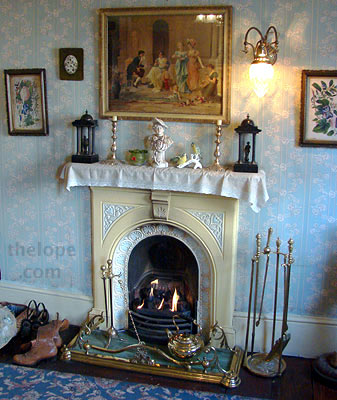 Not all in this place is fictional recreation. The museum is an a real 1815 house complete with fixtures and for the American tourist, that alone is worth seeing. 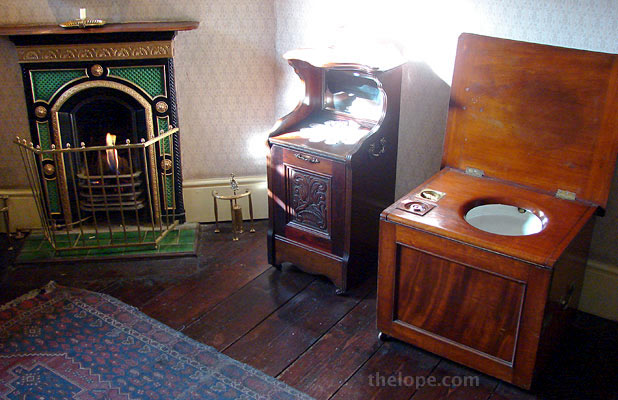 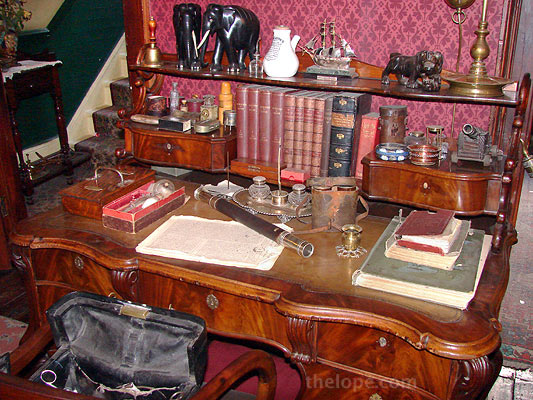 Doctor Watson's medical bag rests in the chair to this desk. 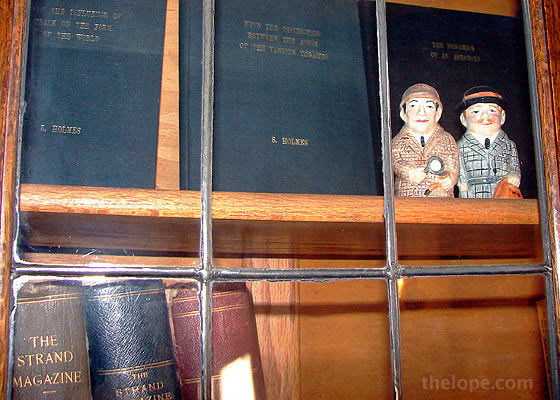 Obviously, Holmes would not have had Sherlock Holmes memorabilia, but it seems to work for the mood, anyway. 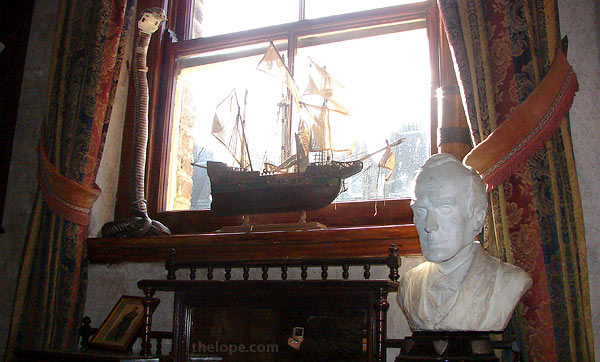 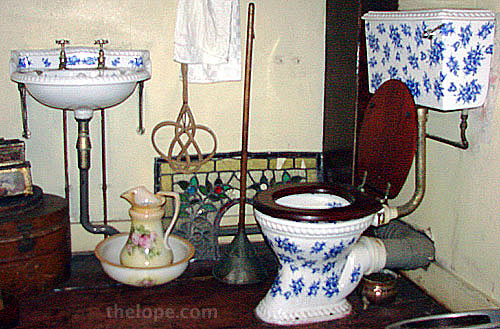 I was quite surprised by the cheery porcelain in the water closet. 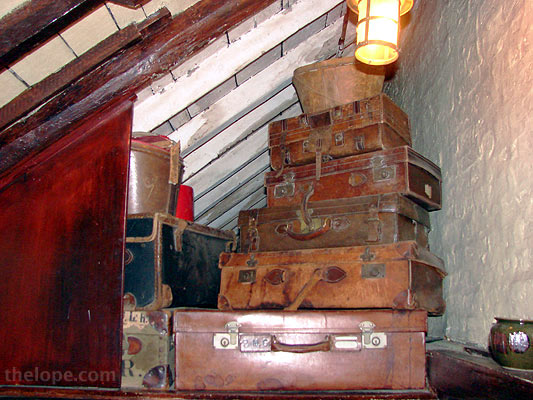 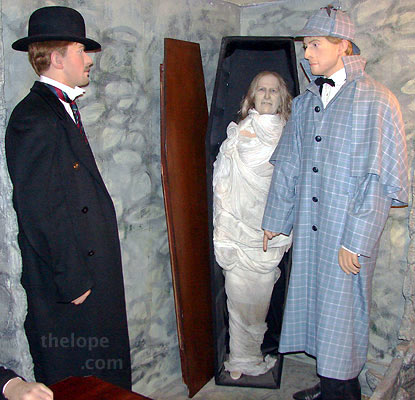 Also in one of the upper rooms was a display of mannequins illustrating some of Holmes' and Watson's adventures. 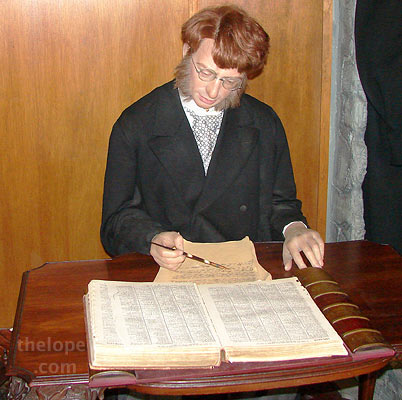 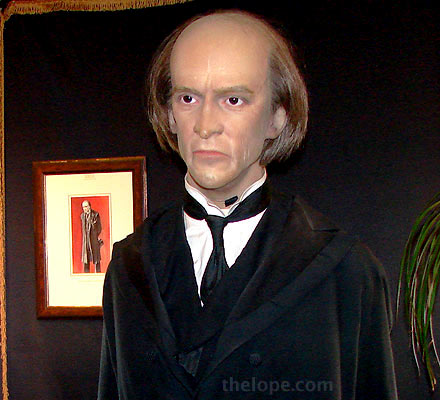 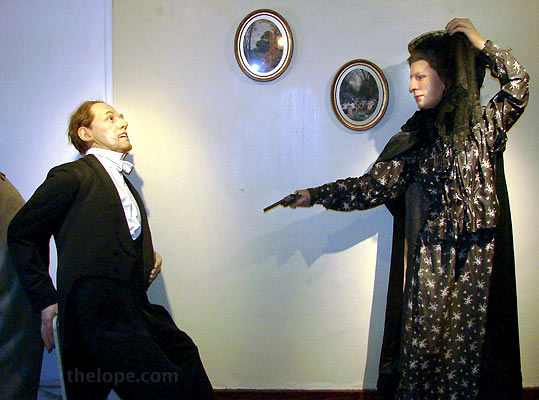 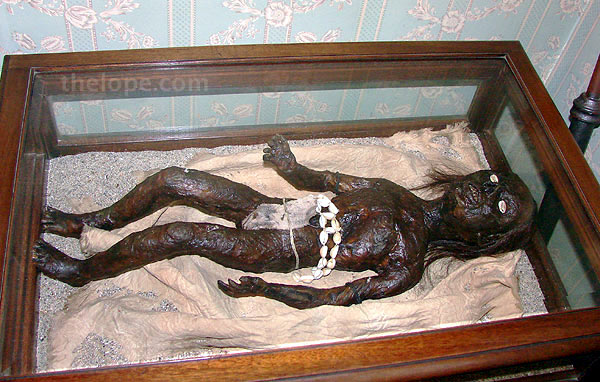 There is also a set of exhibits based on what objects from the published stories. This one is from "The Adventure of Wisteria Lodge." The label reads: "Voodoo fetish from the house of Mr Garcia found murdered in Oxshott common". 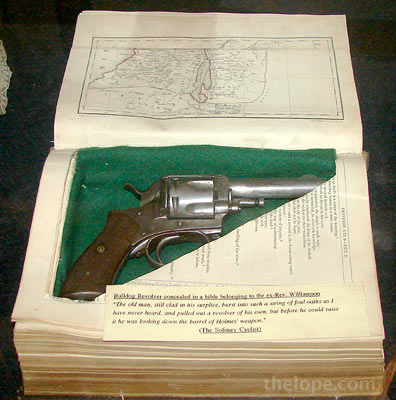 This bulldog revolver concealed in a bible is from "The Solitary Cyclist."

At top is a South American bird arrow and quiver from "The Sussex Vampire." At center are Andeman Islands poison blow-pipe darts and case from "The Sign of the Four." Below is a horn-handled clasp knife used in the murder of Pietro Venucci from "The Six Napoleons." 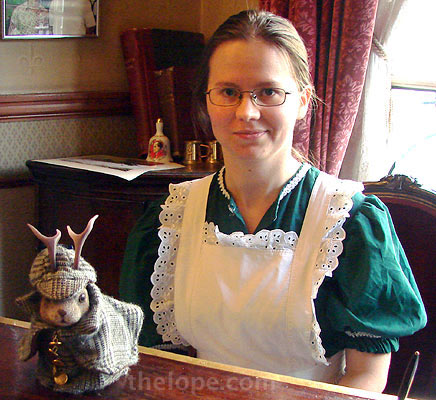 Of course there's a gift shop. That would be elementary. By the way, just as "Play it again, Sam" is never heard in the movie, Casablanca, "Elementary, my dear Watson", does not appear in any of Conan-Doyle's Sherlock Holmes stories.

The job openings at the museum are interesting to read. They sound pretty cool for a people with theatrical tendencies.

Ace, always on the look out for spare outfits, coveted these gift shop bears in deer stalker caps and hounds tooth pattern capes. Mysteriously, one of them was later found naked in the donation box of a thrift store. Curiously, Ace was not interested in taking the case and soon fled the country for the U.S.