The Lope: Wenches and Pie

The Spring 2009 Great Plains Renaissance Festival is this Saturday and Sunday in Wichita's Sedgwick County Park. The event's website says that the reproduction Viking ship above (behind the women) will be offered for boat rides. That's new this year as the ship is usually displayed land.

At the other end of more than one spectrum lies the MCC sale at the Kansas State Fairgrounds in Hutchinson today and Saturday, a rather large and diverse charity event held by the Mennonite Central Committee. There's more food there than one could ever want, quilts both traditional and no so much so, antiques (including big ones on wheels) and arts and crafts. 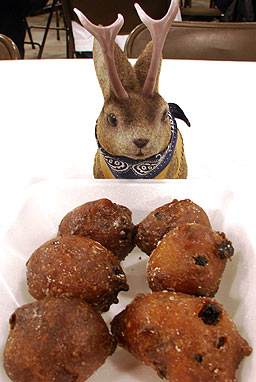 If you've never been, you gotta go just for the atmosphere...and the verenika...and the new year's cookies (above).

Even if you're not a farm type, you might want to check it out. Last year, they auctioned two tractors, including a Canadian Cockshutt designed by Raymond Loewy, who also designed the Coke bottle and put the finishing touches on boomerang formica. I've also seen vintage model train stuff there.

Please be aware that the MCC sale is largely over by the middle of Saturday afternoon so do check their schedule if you want to go.

See extensive photos of the MCC sale in 2007 and 2006. Their website is here. When you look at their site, do check out the fine print at the bottom of the front page - the stuff about the site itself. Whoever wrote it had a nice sense of humor.

Wow, two ends of the spectrum indeed. The juxtaposition nearly set my hair on fire....
Love the dragonship, but I am still unclear as to who or what the scantily clad anorexic (for Vikingfolk) "wenches" represent. Kinda looks like "Run Around in Your Bra Unquestioned Day" to me. Pirate bait? What IS clear is that it has been decades since I've been to Renfest, and times have clearly changed, some more....
And on the other end of the spectrum, I was glad o see that so many people continued to step up this year and make it another very successful MCC sale. And the food never changes....

Ace with the wenches. Best. Picture. Ever.