With the (national) Official Route 66 Festival '08 beginning Thursday in Litchfield, Illinois, I'm looking back on my experience meeting so many personalities of the mother road last year, when the festival was held in Clinton, Oklahoma. 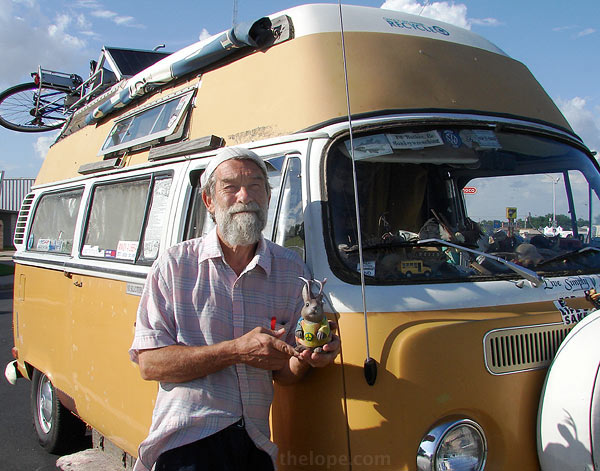 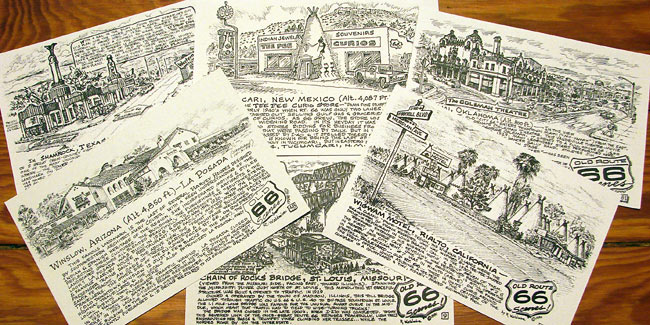 Waldmire has illustrated the Mother Road for well over two decades; his postcards are a standard rack item at many a Route 66 stop. I've been buying them for years so it was quite a treat to meet him last year in Clinton. 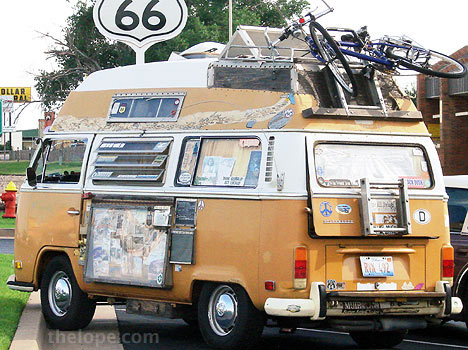 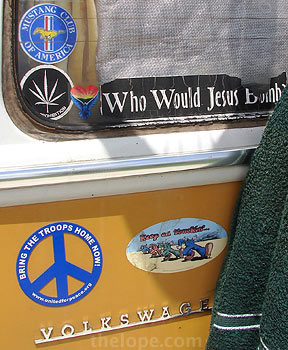 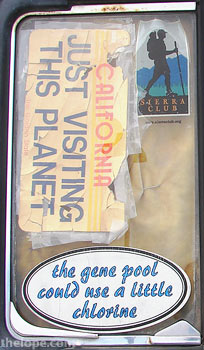 For more on Waldmire's history, read this article at Desert Exposure. 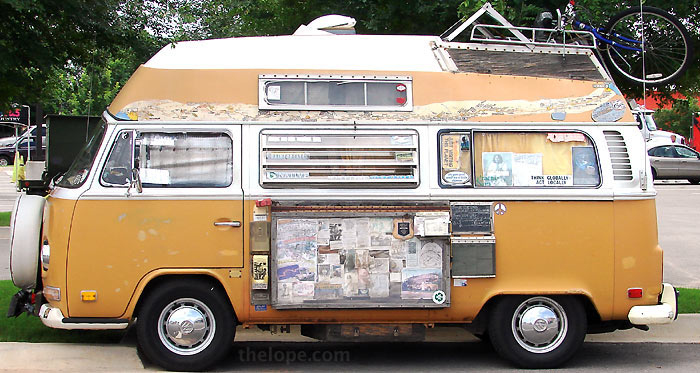 The van itself is iconic to roadies (Route 66 aficionados), and found pop culture relevance with the release of the Pixar movie, Cars. Fillmore, the VW van in the movie, is based on Waldmire and was originally supposed to bear his name. True to his colors, Waldmire did not sign off on that, partly due to the fact that toy versions of the van would be offered in McDonald's Happy Meals, which would clash with his beliefs as an ethical vegetarian. 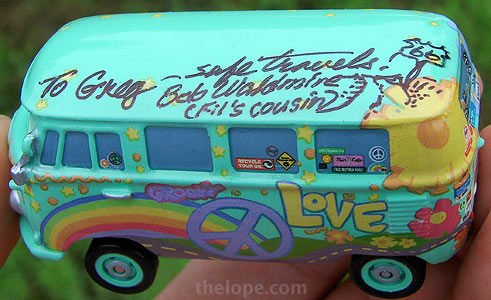 He will autograph toy Fillmores, but signs as "Fillmore's cousin." 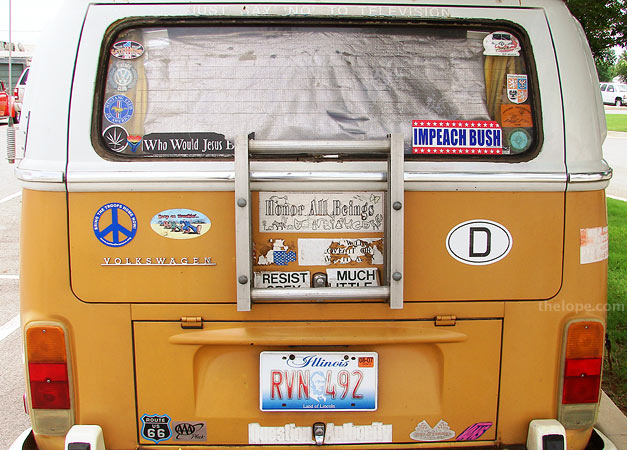 Here's the back of Waldmire's van. 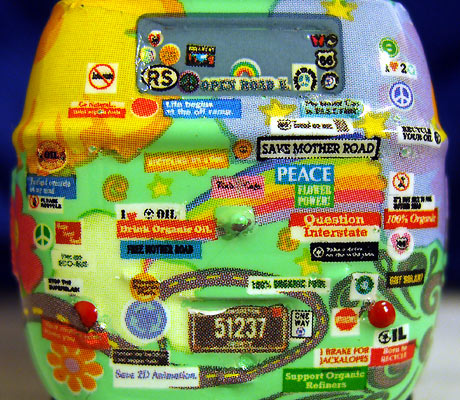 And here is the back of a die-cast toy Fillmore. I hadn't noticed the "I Brake for Jackalopes" sticker until I shot this picture.

I asked Waldmire what he thought of "Cars" and he said he liked its message of "slowing down", but objected to the scene in which the protagonist, Lightning McQueen, races a train through a crossing. 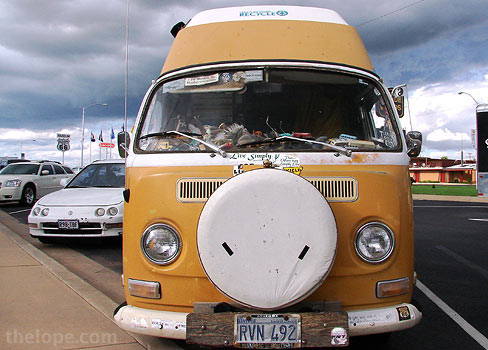 He'd also like to have seen more of the recreational vehicles shown briefly in the movie. 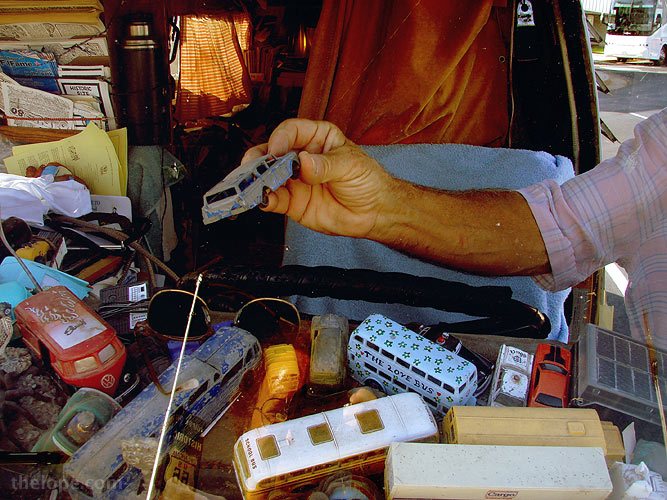 Serendipity gifted me a nice moment of allegory when Waldmire described the varied contents of his dashboard.

It was one of those moments novelists and biographers cherish.

"Each object represents a memory", he said. 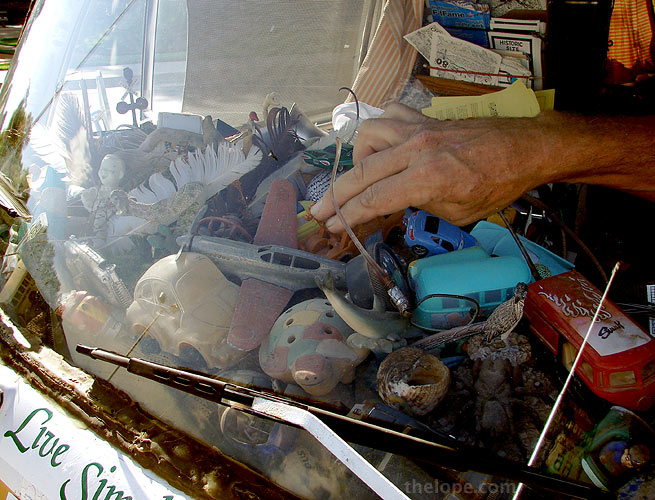 As the objects and layers get older and the memories they represent fade and blur in detail, they are joined by newer ones.

Trains are also an interest of Waldmire. He hopes to replace this melted Santa Fe streamliner with a metal version. I thought it looked like "Dali does Santa Fe." 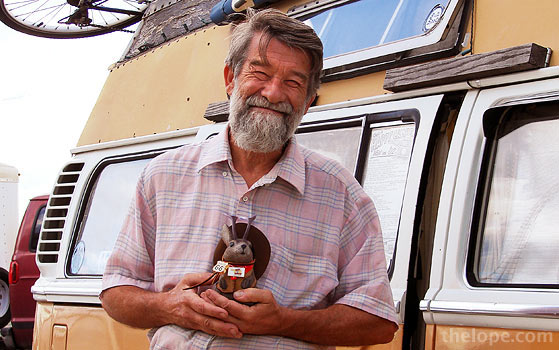 Waldmire told me he would not be traveling as much in the future as he hopes to settle down in southern Arizona. I hope that's not too soon, as I'm looking forward to scanning Route 66 for that groovy yellow van.

We've certainly enjoyed Waldmire and his work, and hope he'll be at this year's festival.

posted by Ace Jackalope at 5:25 AM

I love the contemplative picture of Ace and the Route 66 illustrations.

Thanks - I have always wanted to meet the one and only Bob :-) Love the great photos with Ace and his fantastic van. Hope you get to catch up with him again.

We just spent a few days with Bob in Portal. What a wonderful place and perfect way of life... steps me back to the way it was in the 1950's or 60's. Enjoyed seeing Bob's home and meeting his many friends in the area. We will feature him in the November issue of The Wild West Gazette - see it at www.wildwestgazette.com
LeeAnn Sharpe Editor

God Speed in your dance with cancer. One never really takes the time to stop an think of the genius behind those sketches we've all seen. Only when he is dying...do we get his story from the national press. But when he was screaming of soldiers dying, or our country's soul dying he was ignored. And so it goes.

Sadly, Bob passed away yesterday (December 16, 2009). He died peacefully in his sleep. Godspeed, Bob. I am glad that I had the pleasure to know you.

I miss going to work at the Portal Cafe and seeing Bob sitting there at table 5 working on his next project...I miss all of his health advise and wise words...It's crazy you know, it doesn't feel like he's gone...My co-worker Ryan and I were talking at work the other day, and I said "It seems like Bob is going to walk in here at any minute...it doesn't feel like he's gone." Bob was a good man, and he is missed dearly here in Portal Arizona. We will never forget you Bob! Love,
Cassie Webster

My wife,Pat, and I had the great fortune to meet Bob back in January 1989 in Tombstone Arizona. We were camped and Bob had came in to sell some artwork to the parks office. I was amazed and fascinated by him, his van and his story about his travels, showed me his drawings of the school bus he was about to convert into a new home and his family and the corndog.

We later met him at the Boothill Cemetery where I got a picture of him and his van, he gave me a small booklet about the rain forest and we parted company. I knew then that we would again see him sometime and he was gong to achieve some fame and I felt honored to have met him.

We then saw him some years later on a TV special about Route 66. Often thinking of him I finally did a Google search and just learned of his final days of his visit here on earth.

Rest in peace Bob. I'm sure we will omeet again on the road to heaven.