I've never done a movie review, but I just saw a midnight showing of Indiana Jones and the Kingdom of the Crystal Skull and it ties in rather well to book reading given by novelist Max McCoy at the Hutchinson (Kansas) Public Library last month. My review of Indiana Jones and the Kingdom of the Crystal Skull (no serious spoilers):

Yeah, it was good - not as energetic as Raiders of the Lost Ark, much better than Temple of Doom (the seemingly obligatory cute kid movie of the series) and not as witty as the Sean Connery-enhanced Last Crusade.

Harrison Ford is rather low-key much of the time, but an older Jones might not be credible if he played it like a young man. He's more the reasonable man annoyed by the circumstances into which he is cast than he is the action hero for the first part of the film.

That being said, it's a fun two hours of the sort of action you expect from the franchise, multiple chases, ticked-off natives, archaeological practices that'll make anyone familiar with the science cringe more than the inevitable creepy-crawlies will. There's a somewhat predictable ending, but it's a good ride getting there.

We get to see the warehouse again - you know the one.

Fans of retro space-age culture will enjoy parts of the 1957 setting, including a brief glimpse of an Atomic Cafe sign that may or may not be a tip of the hat to the documentary of the same name. There's also Indiana's brief voyage into a late 50's household that isn't what it first seems. The kitchen even has retro product placement.

If you want to impress your friends, read up on crystal skulls - particularly the Mitchell-Hedges one - which the characters mention. Wikipedia has a decent summery, but Archaeology.org has more depth. And those of us who read Chariots of the Gods at an impressionable age will enjoy seeing some of the sites mentioned, even if you later realized von Däniken was really reaching.

And in a case of "isn't that weird?" or maybe just smart programming, one of the Family Guy episodes Cartoon Network showed last night ended with a scene in the warehouse. You know the one. Which brings me back to Max McCoy and an interesting insight he gave his audience on the process of writing novels around an established and well-guarded character.

McCoy mentioned a white book containing George Lucas' views on Indiana Jones - his past and future - a sort of writers guide by which he had to abide.

"This white book", I asked him, "is it kept in a crate in a huge warehouse?" 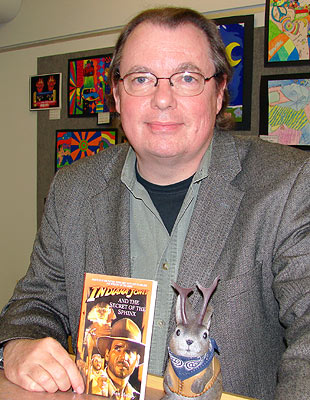 
In addition to McCoy's just-published novel, I, Quantrill, he is working on Strangely Heavy: A True Story of Passion and Rivalry in the Meteorite Fields of Kansas, from which he read a draft of the first chapter.

The Kansas state motto is Ad Astra per Aspera - Latin for "to the stars through difficulties." How proper that some really choice stars - falling ones, anyway - came to Kansas. Of course, falling stars are meteors, or meteorites if they reach the ground, and Kansas has a whole field of them, courtesy of the atmospheric breakup of a large stony-iron meteor which sent pieces shotgunning into the ground near Greensburg about 10,000 years ago. The most famous of these is Greensburg's former "World's Largest Pallasite Meteorite" (seen here with Ace in 2006), a tourist attraction of the town which is not currently on display, owing to its building having been blown away - literally - in the May 4, 2007 tornado. The 1,000 pound meteorite has a name: "space wanderer." This close-up of the space wanderer shows the structure of a pallasite meteorite - an iron-nickel matrix containing bits of olivine. The structure of a pallasite meteorite is clearer in this cross section of a small specimen shown by McCoy at his Hutchinson appearance. 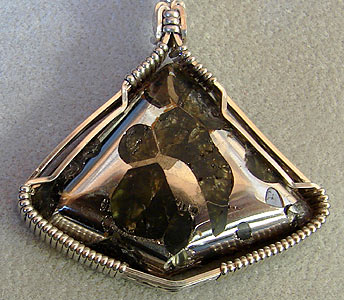 Pallasite is even fashioned into jewelry, as seen in this work for sale at Greensburg's temporary Big Well gift shop earlier this month. In late 2006, professional meteorite hunter (and a subject of McCoy's book) Steve Arnold, found a 1,400 pound pallasite meteorite, also near Greensburg and part of the original mass that broke up in the atmosphere over Kansas 10,000 years ago. It now holds claim to the title of world's largest pallasite meteorite. This particular meteorite is referred to as "oriented" because it stayed in one position during its atmospheric journey, as seen by the curved surface, which resembles the heat shield of a space craft. 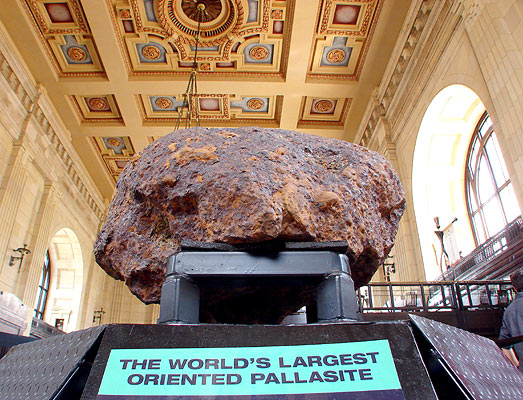 I shot these photos in August of 2007 when the meteorite was on display in Kansas City's Union Station. It was actually the second time I'd seen it. Here it is on display at Hutchinson's Kansas Cosmosphere and Space Center in July of 2006. It had red accent lighting, though I think this would have been better on the top, indicating the heat shield effect. From red to green - McCoy also discussed the catalytic effect of Superman's Kryptonite on public awareness of meteorites. Here's a piece of movie serial prop Kryptonite in the Superman Museum in Metropolis, Illinois, earlier this year. We'll feature more of the museum in a story on the 50th anniversary of Superman's debut in Action Comics, later this year. And from one hero to another: I always enjoy cruising the Kansas State Fair for the latest not-quite-licensed copyrighted pop culture properties. Among the inflatable spidermen and stuffed Stewies this thinly disguised Indiana Jones has decorated the side of a carnival ride the past few years.