The Lope: Where is Ace Jackalope? (episode 9)

Where is Ace Jackalope? (episode 9) 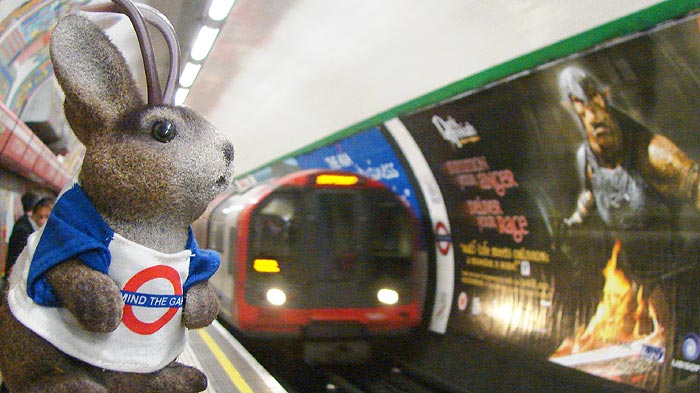 Where has Ace Jackalope journeyed that he would have to "mind the gap" as his shirt suggests?

Answered - Cumbres wrote:
"You are in a "Tube" station in London, England. I guess this explains your long pause in posting! :)"

Jolly good, Cumbres; Ace had me take him for a quick trip across the pond on urgent business. It seems something was afoot in the damp streets of London, but there's nothing our antlered detective can't protect the women of England from. Stay tuned.

posted by Ace Jackalope at 9:35 PM

You are in a "Tube" station in London, England. I guess this explains your long pause in posting! :)

I think it was in Charing Cross station where I first heard the term "Mind the Gap" repeated over the PA. I couldn't help but believe the British were ahead of us. In the US we would say watch the gap. The British not only want you to see it but to think about it too! :)

They don't say "mind the gap" so much anymore, sadly. Last week, the only place I heard it in a recording was at the Bank tube stop, although it did appear in print on electronic posters along one of the escalators. What seems to have replaced it in most places is a recording asking you to "mind the yellow line."
The phrase lives on, however, in "mind the gap" t-shirts and (my favorite) "mind the gap" thong underwear (yes, I photographed a package of that...shall I do a post?)

Sure, I would be curious to see that!