Since 1953, the Johnson Music neon sign at 420 North Main had been a Hutchinson, KS, icon.

This July, 1961 snapshot shows the sign during a parade.

As the city changed around it, the sign became a relic of the era when big neon signs were a rule rather than an exception.

No more, though - Johnson Music closed June 25, 2016, and the sign was removed on July 22. Second generation owner Craig Johnson (pictured) has retired. His store was a valued Hutchinson institution, serving multiple generations of musicians, teachers and students.

For 63 years, since its installation in 1953, Johnson Music leased the sign from Luminous Neon of Hutchinson, which now has a contract to sell it to airstreamguy.com of Marion, KS.

Tom Sellers of Luminous Neon was kind enough to provide me with a scan of the concept drawing from the original 1953 contract.

The 15" letters for "PIANOS" were listed as rose in color while the 12" "MUSIC CENTER" letters were orange. The rim was green and flashed.

Sellers informs me the green is made with argon gas (blue) in tubes with a phospor coating. The rose is neon gas in phosphor-coated tubes and the red-orange is straight neon.

I always found it curious that the sign did not carry the name of the business, but it's more understandable since it's a rental.

Here's a brief clip I shot a few years ago. I have better video now and will substitute it when I have the time to edit.

Sellers also allowed me to photograph the blueprint of mount. If you're into details, here's a larger version for legibility.


A Gallery of Johnson Music photos

Clarence the Christmas Dinosaur passed by a few times during Christmas parades of the mid 2000s and was used again in the 2016 Patriots Parade on July 4.

For the 2009 Hutchinson Christmas parade, I shot it as the head of a mid-1960s International Fiberglass "muffler man" head dressed as Santa passed by.

A foggy night in April of 2016 provided opportunities in color...

...and in black and white

I was able to get this view (time exposure ghost motorcycles and truck) as well as the picture at top, through the courtesy of Greg Fast, who owns the building next door to the south and had a scissor lift for washing his windows.

The Johnson Music sign is reflected in a broken window of the Landmark, an abandoned apartment building built as the Hotel Stamey in 1923. Across 5th Ave is the 1904 Carnegie Library, now the AFL CIO Union Labor Temple.

There are no villains in this story, but it's unfortunate that Hutchinson is losing another piece of its unique visual character.

Another video, this one from the snow storm of November, 2011

For the Christmas season of 2014 a snowman made of drums was featured in the front window.

November 21, 2014 - Artist Brady Scott paints one of the front windows of Johnson Music Center for Christmas.

The sign was removed from the building on the morning of July 22, 2016, ending its 63-year presence on Main Street. (Photo courtesy of Kristen Garlow Piper) 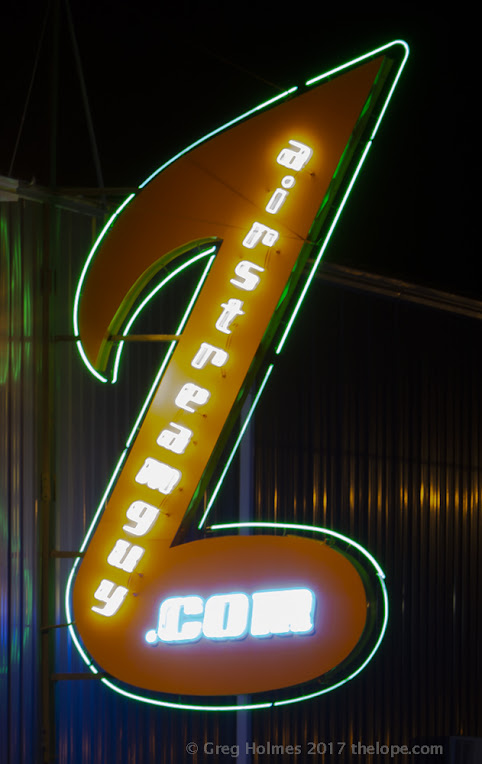 The sign was remodeled for its new owner, airstream.com of Marion, Kansas, The remodel involved skinning over the sign with new metal, painting it orange and applying new neon. 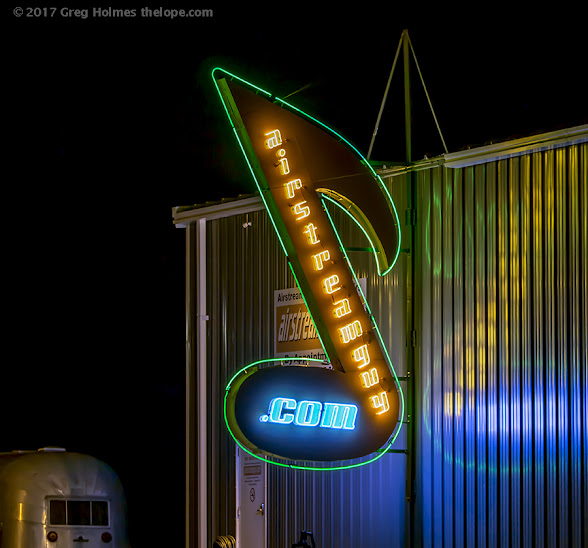