The Lope: A Guide to Hutchinson, KS, Christmas Lights, 2013 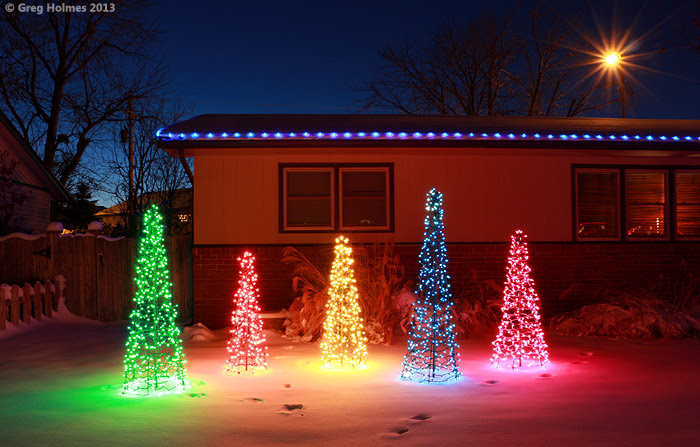 I added new locations on Sunday night, December 22, such as this one on Meadowlark Lane near 23rd Avenue. 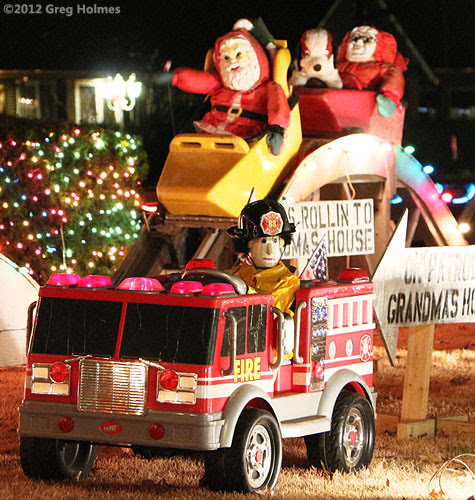 Here are some highlights of what Hutchinson, KS, has to offer in Christmas lights and displays in 2013. Some of the pictures were taken prior to this year but I have checked to see that all are lit for 2013.

First off, if you have limited time make sure you see our most unique display, the "Grandma's House" automations of Dale Hankins at 25 Countryside Drive. Each mechanical grandchild is on its way to Hankins' house via a different mode of transportation.

Here's a video I shot just a few days ago as it snowed on the display.

Near Dale's house you'll also find this highly color saturated home at 3001 North Monroe Street. In addition to lots of LED lights, they've chosen to use their house as a canvas for colored floodlights and have "Glory to God" and "Peace on Earth" signs." There's also a manger scene that faces 30th Avenue. On the NE corner of Carlton and Curtis you'll find this vintage red truck. It's being driven by Santa but he wasn't visible in the snowy windshield the night I shot, so I'll be back. Aside from its impressive luminaria, the Hyde Park area has some wonderfully decorated homes. This resident at 201 West 20th Ave. displays a collection of blow mold Santas.

The largest season-long area of Christmas lights is a half-mile square area of perimeter lights that covers most lawns from East 17th to 23rd Avenues and Meadowlark Lane to North Lorraine St. The tradition started a number of years ago on East 22nd Avenue and typically begins Thanksgiving weekend and lasts til New Years. The house at 62 Meadowlark Lane is a sort of cornerstone of this neighborhood and is often the most decorated.

Here's a video of their shivering snowman, particularly appropriate as I write this on a night when the temp is supposed to go down to four degrees. 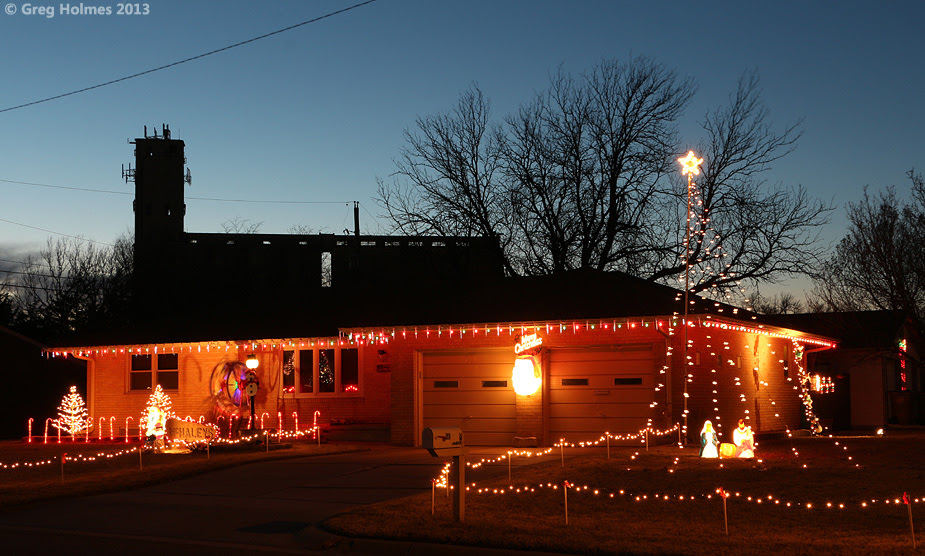 Also within the perimeter light area, the house at 23 Rambler Road is also quite ornate and has a small Ferris wheel with stuffed animals. A neighborhood north of 56th street features large wooden Christmas cards, though sadly the tradition is fading. I recommend starting at Sequoia and 56th. 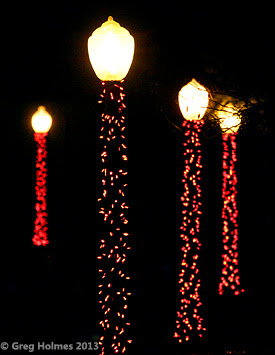 The most prominent Yuletide feature of the Antique District of South Main Street is this this light frame helicopter atop the Anchor Inn at Main Street and Avenue B. This shot is from 2009; It's the same helicopter but the building has more lights now. 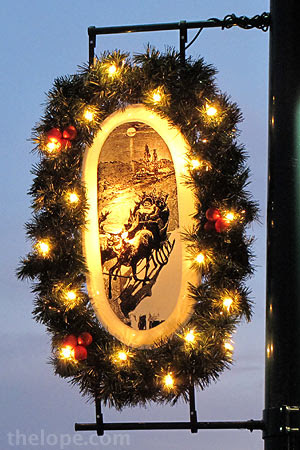 The Antique district displays lighted pole decorations featuring nostalgic graphics. These are used from Avenue A to about Avenue D along South Main Street. This style of wreath with bells is used along Main and a little bit of some side streets from Avenue A to the BNSF railroad tracks at about 3rd Avenue. This year the incandescent lights in the wreaths seen above were replaced with cool white LED lights. For more pictures of Hutchinson's street pole decorations under lots of weather conditions, see my 2010 Hutchinson Christmas light guide.

There are at least five synchronized music and light shows in Hutchinson. I have listed the FM radio frequency you'll need so you can already be tuned in as you approach.


1004 College Lane, home of Jason Rose, sometimes features a live Santa. Set your radio to 106.7 FM. The heavily decorated backyard of this home is visible from 14th Avenue. Additional pictures here and here. "David's Display" at 804 Newport Road features a flat screen TV placed against a window with a DVD of Santa within the room and occasionally looking out. Set your radio to 89.7 FM. A projection screen on a porch at 201 East 14th Ave shows a religious message. Set your radio to 89.7 FM.

First Church of the Nazarene, 4290 N Monroe, has a set of four singing Christmas Trees. Set your radio to 90.7 FM. The house on the NW corner of Adams Street and 30th Avenue usually features this metal lawn bison in holiday attire and 2013 is no exception.

The house at 400 East 12th Avenue has added new decorations every year for decades, such as this set of jointed wood reindeer. Wood cut-outs and patterns were once sold by retailers like Sears but were eventually replaced by plastic blow mold pieces. These in turn fell in popularity in the 1970s. Big nylon inflatables now hold this market niche but I prefer to concentrate on the older rarities.

A home at 3810 Halstead Street features a backlit poinsettia graphic. This house on the NW corner of East 6th Avenue and North Maple Street has a long tradition of being thoroughly decked out for the holidays. 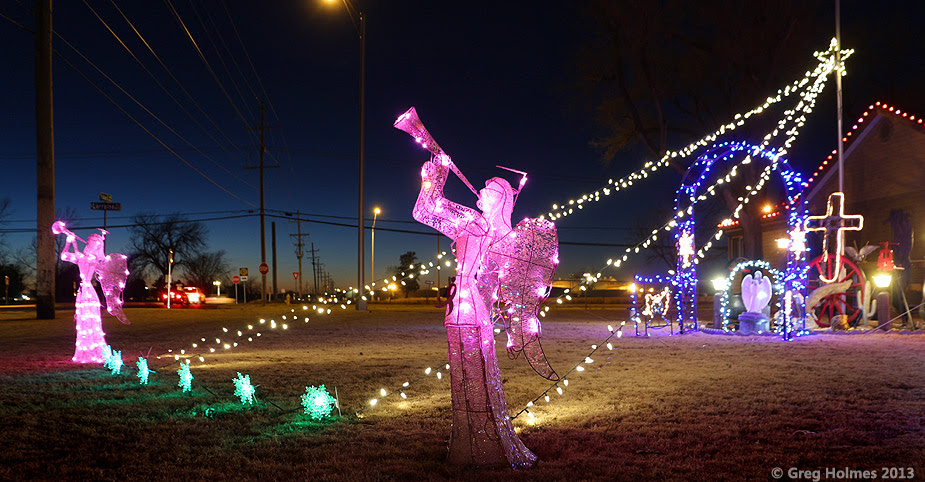 The span of four houses extends to 431 Justice. The Barretts at 204 South Walnut in South Hutchinson have illuminated their home in a fashion that draws attention from hwy 96. There is also a speaker on the lawn playing Christmas music from a local radio station. 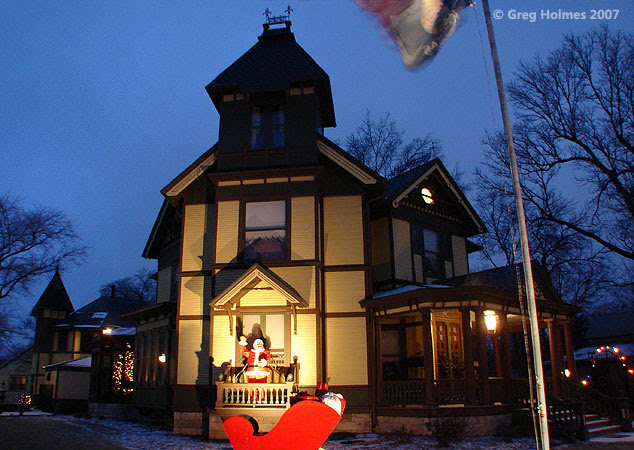 The Houston Whiteside Historical District has a number of decorated homes. This one, at Plum Street and First Avenue, features a talking, singing automated Santa. The district is roughly bordered by the BNSF railroad tracks on the North, Avenue B on the South, Elm Street to the West and Pershing Street to the East. One of my favorite houses lies just outside the Houston Whiteside District on the north side of Avenue A between Pershing and Severance streets. I like it because they utilize an indentation for a nativity scene.

Other Sites of Note Cargill's grain elevator near 3rd Ave and K-61 features a decades-old star. See more in this blog post. I remember in the 1970s one could see stars atop grain elevators in the distance all over the place. This is not the case anymore. Hutchinson Community College has a Merry Christmas sign and star atop Lockman Hall, visible along the east side of North Plum Street just north of East 11th Ave. If you're lucky enough to have snow, you can have some fun photographing this as there's an electronic message sign just out of frame that lends various colors to the snow. I opted for a moment with deep blue. Trinity United Methodist Church, 1602 North Main Street, displays a life-size Nativity set that was passed on to it from the now-defunct Peques Department store, downtown. The First Presbyterian Church at 201 East Sherman has star patterns made of lights atop its tower. As of this writing, they turn on at 6 p.m. The Medicine Shop at 1401 North Main Street is outlined with red lights again this year. The City Building of South Hutchinson at 7 South Main Street has erected a sort of pole tree on its roof. 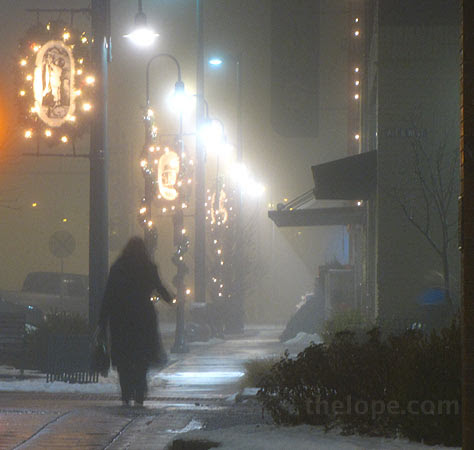 Shopping downtown as seen here in the Antique District of South Main Street can be a delightful throwback to the pre-mall U.S. Here's a foggy night in 2008. As to Christmas movies, the Fox Theatre will show Christmas Vacation on Christmas day at 7:30 p.m.

posted by Ace Jackalope at 6:43 AM

My neighbors on the corner of 26th and Adams had a great display last year that went along with music on the radio! This year just the lights are up, not sure if they are going to syncronize the light this year or not!

Thanks, various anonymous people. I added 400 E 12th. I've enjoyed that place for over 20 years. The place at 26th and Adams does not have synchronized lights this year but does broadcast Christmas music.

The Johnston's at 400 E. 12th thank you for your mention of our property. We love adding new decorations and are glad people take joy in our adventures in Griswolding ;)

There is a light show at Carey Blvd and Justice, then a bunch of houses lit up at the end of the block at Justice and Ave G.

33 Faircrest dr. has a beautiful setup also!! Thanks for these suggestions to take the kids!