The Lope: 70 years of The Wolf Man

70 years of The Wolf Man 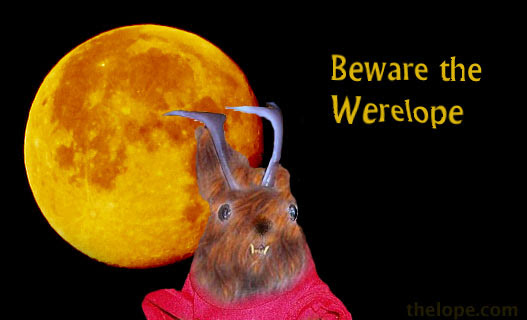 This month in 1941, Universal Studios premiered The Wolf Man with Lon Chaney, Jr. in Los Angeles. On December 12, 1941, it opened nationwide, giving rise to several sequels and much parody, including our own lycanthropic jackalope.

By coincidence, this year December 13 had a full moon and a lunar eclipse. I'm glad I didn't realize the juxtaposition at the time, what with me having no gun and no silver bullets.

And what do werewolves do during a lunar eclipse, anyway? "Hey, I know I chased you down and started to gnaw on you, but now that the moon is in umbra, I'm just not into it. Do you mind cleaning up and having dinner in a restaurant with me through penumbra, then we take up where we left off?"

I must confess, at the risk of being ostracized by fellow classic horror fans, that I was never fond of Lon Chaney Jr's Larry Talbot. It seemed the true curse of the Wolf Man was to be interesting one day a month and a bit whiny the rest.

I mean, c'mon Larry, as to that "I'm cursed and lonely" thing, just walk into any goth bar, drop any hint of personality and announce that you're cursed to turn into a primal beast. Granted, the women you get will be fatalistic danger junkies but look on the bright side: you'll have reduced the population of Twilight fans.

posted by Ace Jackalope at 6:49 PM