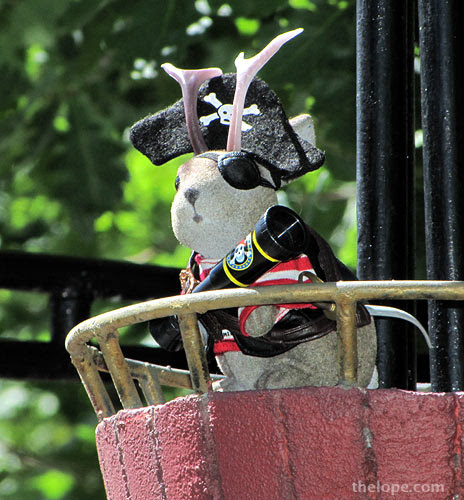 Arrr! From the crow's nest, Ace be a' spyin' Talk Like a Pirate Day, the only holiday - unofficial though it is - which allows us to talk funny all day to the annoyance of those around us.

I think this could be useful. If all the world's leaders got together every September 19th and were required to talk like stereotypical pirates all day, I imaging they'd feel rather chummy 'ere the sun sets. It might keep many of us out of Davy Jones' Locker.

One seldom gets to see "Pirate" in neon. This is the Pirate Contemporary Art Gallery in Denver. (another photo) 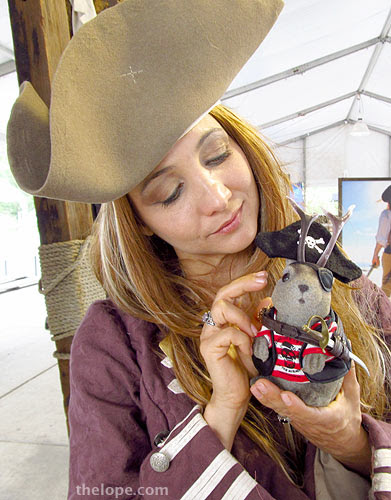 Not all pirates are scurvy dogs, as some of the ladies of the pirate themed entertainment group, Pirates for Hire demonstrate. 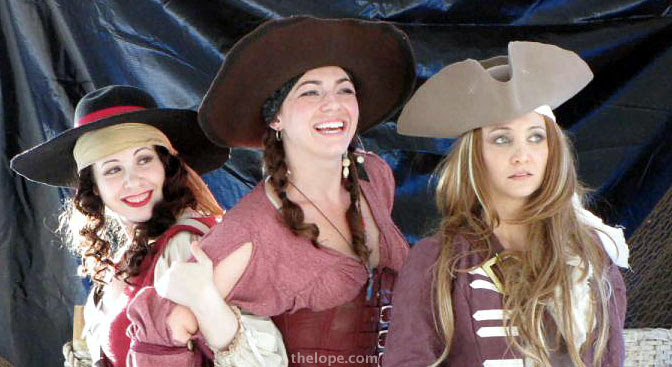 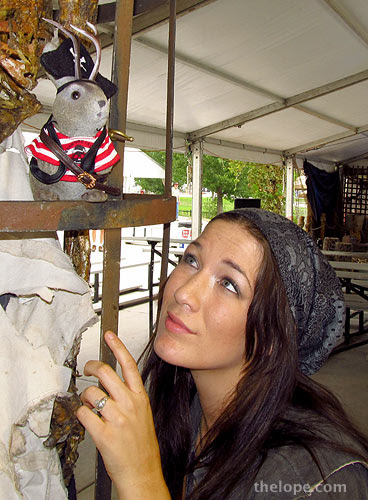 I saw the group at the Colorado State Fair this past August and was impressed by the costumes. This matey was the best freelance Captain Jack Sparrow I'd ever spied. 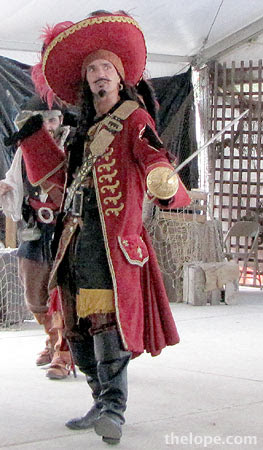 Many pirates seem to have found work on mini-golf courses. This is the Buccaneer Bay course at Adventure Golf in Westminster, Colorado. 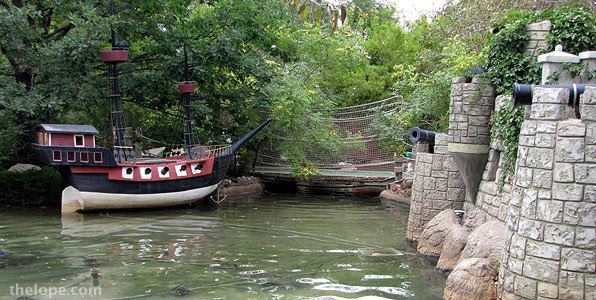 The course has a pirate ship that attacks a fort via an audio track, smoking cannon and air jets in the water for cannon ball splash effects. (video) 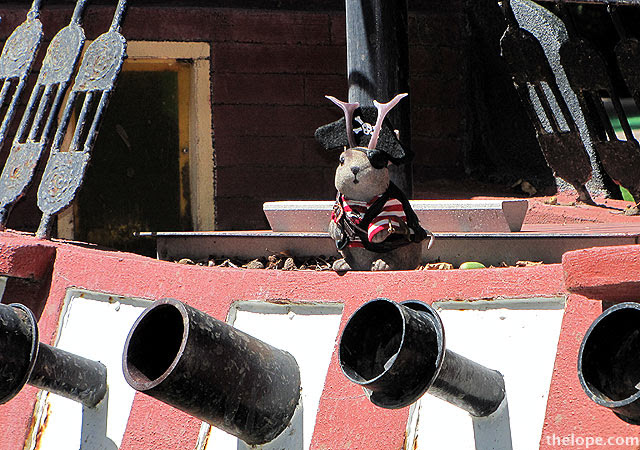 Adventure Golf also has a shooting gallery that features an automated pirate. (another video) 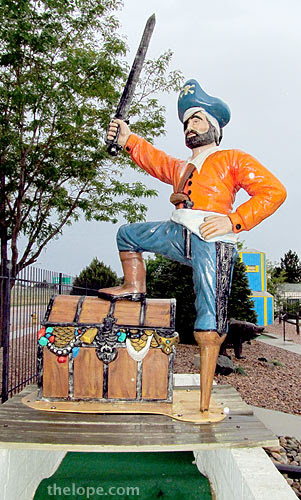 And here be a fiberglass pirate at Adventure Miniature Golf & Batting Cages in Colorado Springs, CO. Pirates are popular team mascots. This logo was spotted in Hugo, Colorado and may pertain to the Genoa-Hugo School Buccaneers.


The Casa Bonita family Mexican theme restaurant on Colfax in Denver, Colorado, is famous for its off-the-scale kitsch level. For that reason alone I recommend a visit. The interior features a faux-jungle pool into which experienced divers show their moves. The setting is also used for short plays that usually serve as thinly veiled excuses for the actors to be thrown into the water. Here's a video of the equally over-the-top acting. Ghost pirates are even cooler than regular pirates. However lame walk-through fun houses may be, they often have fun graphics and decor. This is the ghost pirates fun house at the Kansas State Fair in 2010. 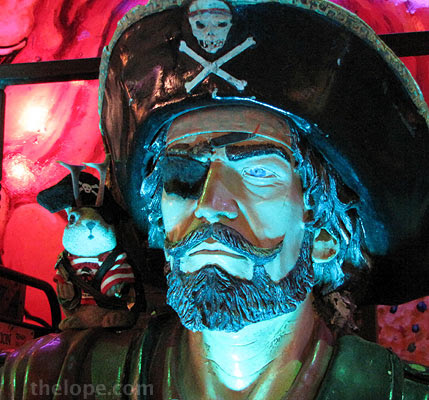 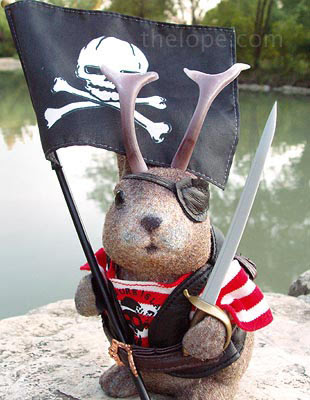 For more piratical goodness, see 2006's Avast, Me Beauties, in which we explain Talk Like a Pirate Day and show a bit of Disneyland. 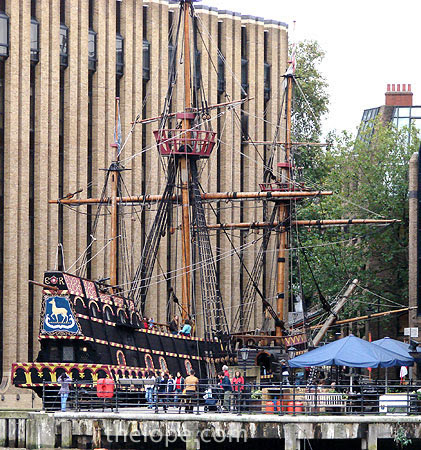 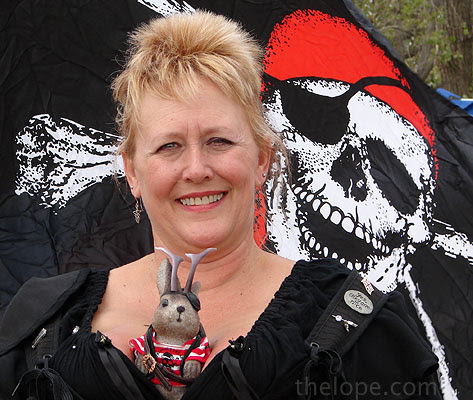 In 2008 we checked out The Great Plains Renaissance Festival and checked out Alice Cooper's pirate stage costumes. We found a use for a muffler man head in 2009, and paid tribute to Emerson, Lake and Palmer's classic prog rock song, "Pirates" with a picture of Ace and drummer Carl Palmer. Doctor Who recently featured a pirate themed episode, "The Curse of the Black Spot", which borrowed the historical pirate, Henry Avery.