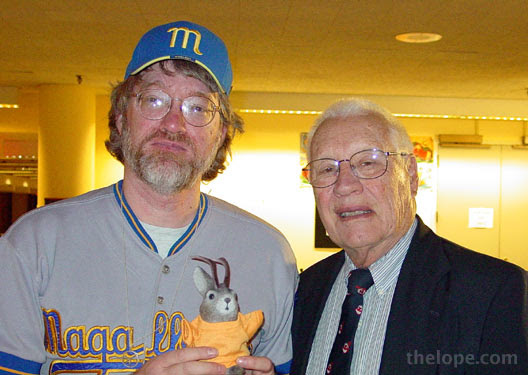 I never met him, myself, not being a baseball fan. But my brother, Steve (above left), did, and brought Ace along. Steve is a film maker and was showing his film, The New Ball Game, at a 2005 meeting of baseball fans in Iowa when the photo above was taken.

A farm boy from Van Meter, Iowa, Feller credited his ability to throw his fast ball - "the Van Meter heater" - with the strength he gained milking cows, picking corn and baling hay. He left a successful career in baseball to enlist in the Navy the day after the bombing of Pearl Harbor.

posted by Ace Jackalope at 3:13 AM

Bob Feller was a great American. I had the pleasure of meeting him myself here in Tucson Arizona. The Clevland Indians, had their spring training here for many years. So even after he retired he would come every spring. Old ballplayers never retire.