The Lope: "When man goes to the stars, our microbes will be waiting for us."

"When man goes to the stars, our microbes will be waiting for us."

Writer Patsy Terrell and I attended a lecture by three scientists at the Kansas Underground Salt Museum this past Saturday.

Why would we go underground on such a sunny day? We wanted to hear all about the oldest living thing yet discovered on Earth - the ancient and re-animated 250 million year old 2-9-3 virgibacillus bacteria. What did you do Saturday afternoon? You probably partied or cooked out. Shame on you. You could have been 650 feet underground in a miles-long slab of salt, hearing about bacteria.

Anyway, I shot the photos and she wrote most of the text for this post. She also edited the photos of the scientists, and did it much faster than I do. Maybe that's why she posts about once a day and I...not so much so. Anyway, this is very interesting. Really. I promise.

Three scientists who discovered a 250 million year old bacteria still alive in an inclusion in a salt crystal were in Hutchinson Saturday afternoon for a lecture at the Kansas Underground Salt Museum. 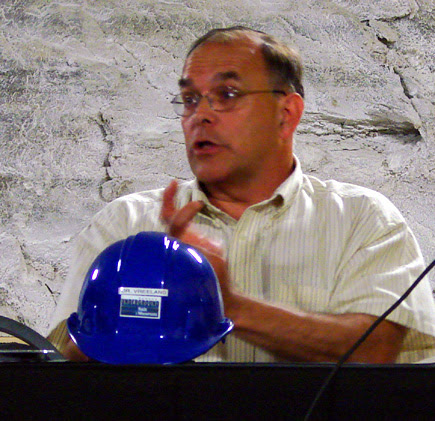 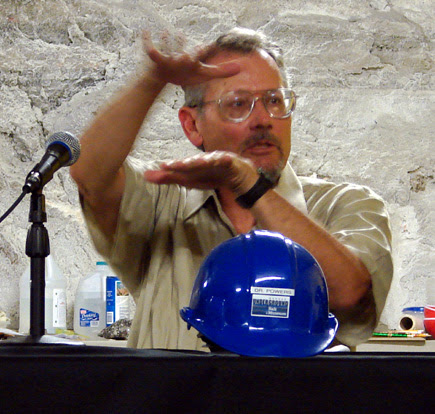 Dr. Russell Vreeland (above) and Dr. William Rosenzweig (below) from West Chester University in Pennsylvania were the biologists. They worked with geologist Dr. Dennis Powers (left) to look at the layers of salt and make sure the area where they were collecting from had not been penetrated before they gathered it. As Vreeland said, "he reads layers like I read a book."

In an inclusion in a salt crystal from a site near Carlsbad NM, in less than a drop of water (12 microliters), they found a bacteria that was alive but essentially in hibernation. Bacteria have an ability to from spores and be dormant for a long time, but no one had an idea they could be dormant this long.

As Vreeland explained, the bacteria could not reproduce in the water where it was because the waste generated would have killed it.  They put it into fresh nutrients, including a 20% salt solution, and Vreeland said they, "woke it up." It took four months for them to see growth in the bacteria.

"The feeling we had when we saw it was humility," Vreeland said in an interview after the lecture. "We're in the presence of an organism that has survived 250 million years in a crystal. You've got to respect that." 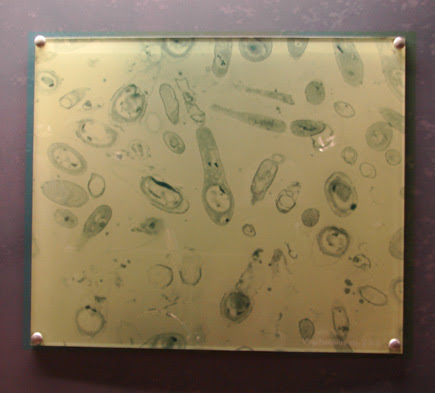 Their research was published in "Nature" in 2000. Before they published the research, "Nature" required even more stringent verification than usual. The researchers isolated the organism in 1998 and published in 2000. The museum here now has an exhibit about the discovery, including the crystal the organism was found in. 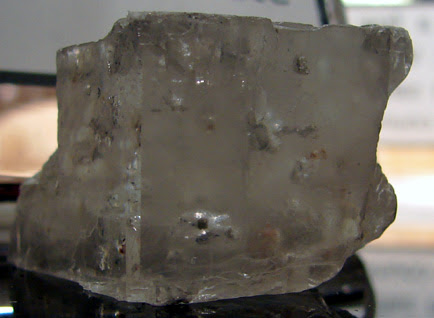 The scientists were surprised by the initial interest in the project. Vreeland said that "Nature" put out a press release on the wire and fifteen minutes later the college switchboard was getting calls for interviews, and was almost instantly jammed. The two biologists did interviews every half hour for the next two weeks. Vreeland said he started at 7:30 in the morning and was doing his last one at 11:30 that night on the BBC Coffee Talk Show. He joked, "Here it is eight years later ... and I'm a museum artifact."

He said one of the great things about the experience was that it has "given us a chance to give science back to the people who paid for it."

Prior to this, the oldest bacteria discovered was in a piece of amber and it was 25 million years old. Before that the oldest was a 10,000 year old spore found in a mummy.

Minerals can be dated radiometrically, and the ones where this sample was taken are 253-254 million years ago, right at the end of the Permian Period. They looked at 100 crystals, and found two organisms.

The dating of this has been one of the breakthroughs of this research. As Vreeland said, "You can only date an organism based on geology, not on DNA." This was dated like any other fossil. 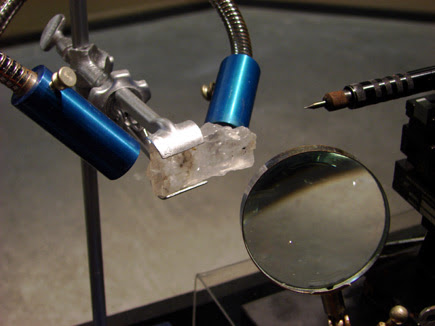 "The key to the exhibit is the techniques, not the organism." They combined microbiologists, a geologist and a high level of sterility.

All of their work was done in very sterile conditions. Vreeland says that "sterility is never a given, it's a probability." The protocols they were working under produced a sterile environment that is 1000 times better than that of an operating room. The chance of contamination for Vreeland's system is 1 in a billion. By comparison, the Mars Rover's chance of contamination was 1 in million.

Vreeland said we know that microbes can withstand the acceleration to get off planet Earth, and they can survive the deceleration of meteor hits, so it's likely microbes from Earth are on Mars. "When man goes to the stars, our microbes will be waiting for us," Vreeland said during the lecture. 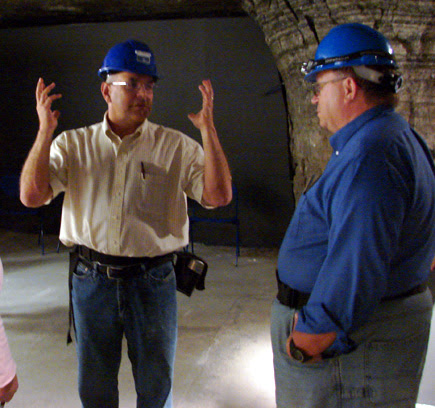 A surprise with this organism has been that when the microbes are exposed to an environment where salt is forming, first thing they do is look for an inclusion and then recruit others. They then allow themselves to be closed up.

Vreeland said in an interview after the lecture that while there's no proof the organisms are affecting crystallization, there are indications of it. The higher the microbe population there is, the faster crystals form and those crystals are slightly different than those that form without microbes present, including the shape and rate they grow. 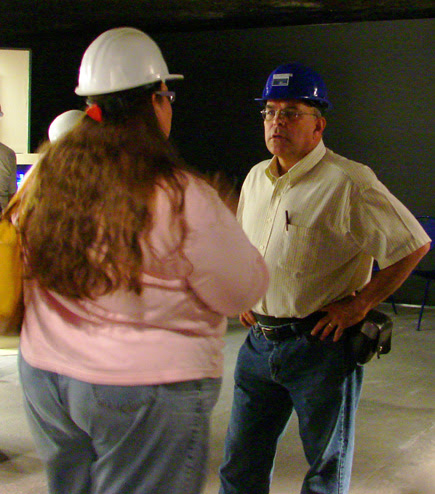 Vreeland says, "Somehow they are doing things we don't expect them to be doing." They've proven that microbes can navigate mazes, and the mazes the organisms pick are the same size as the inclusions in the salt.

"It's a fascinating idea and it's an idea that we as humans really need. We've bought too much into our own propaganda saying we're the pinnacle of evolution, that we're complex and they are simple," said Vreeland in an interview after the lecture.

"The feeling we had when we saw it was not pride. It was humility," Vreeland said in the interview. "We've given it its opportunity and that's all. I feel humble every time I look at it."

"I don't care what your beliefs are, there's no way we can look at ourselves and thump our chests looking at that. That is the oldest living thing on earth. Here's an organism that was alive 100 million years before the dinosaurs, you've got to respect it." 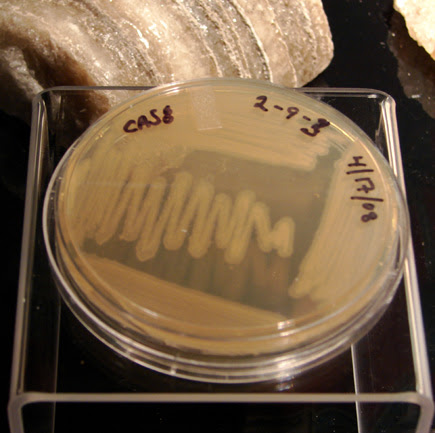 [Thelope.com editors note: during the lecture, I asked Vreeland about any sort of Andromeda Strain scenario in which the bacteria could cause harm. His answer was more along the lines of War of the Worlds but with the bacteria and host roles reversed. You might recall that in H. G. Wells' classic story, common earth germs killed the Martians. In the case of 2-9-3 virgibacillus and any sort of animal, we're simply not salty enough for it to survive - we'd kill it, instead of the other way around.

Geologist Dennis Powers later pointed out that it is very likely the bacteria is weathering out of exposed salt formations and into bodies of water every day - released from its crystal refuge only to die in the dissolving water. Now that's irony.] 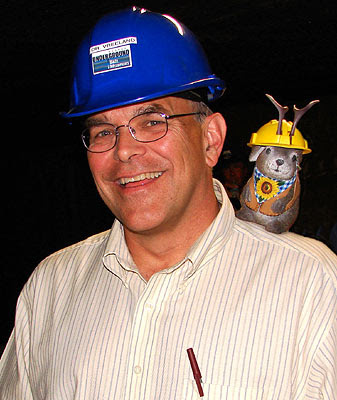 posted by Ace Jackalope at 5:14 AM

Could there be a more perfect photo?.... you rock, Greg. And the Lope, and Dr. Vreeland...

I want to know who the talented person is holding the lope behind the awesome dr. vreelwnd.