The Lope: To Grandma's House

Here at thelope.com, we have so many Christmas pictures that we've decided it's Christmas til Epiphany. Like we can really decide that.

However, I would point out that the Twelve Days of Christmas actually start on Christmas Day.

I think that we, who had to take a hiatus from Christmas lights due to the recent ice storms, are entitled, don't you? 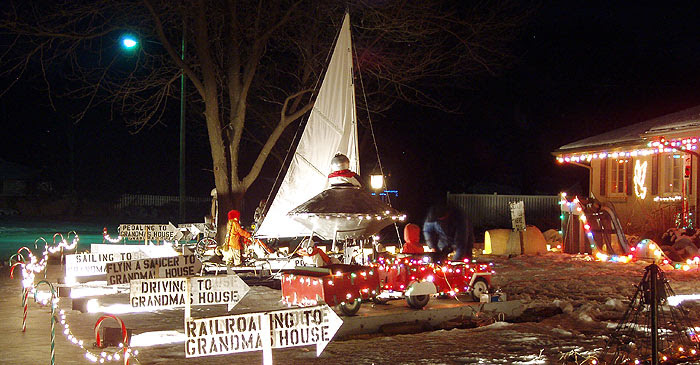 Every town has to have one; or at least it should. You know the places - those local Christmas displays that can be found by looking for unusual amounts of motorists in residential areas.

This inventive display is the creation of Dale Hankins of 25 Countryside Drive in Hutchinson, Kansas. 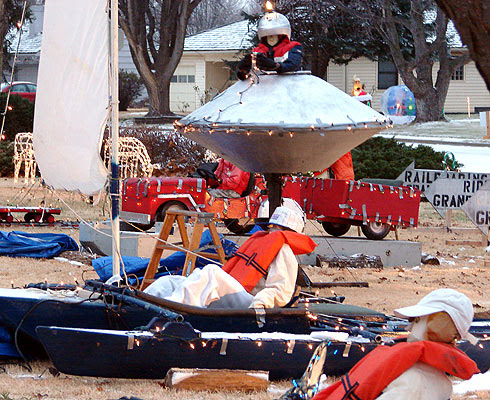 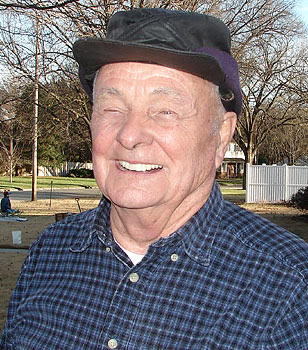 Dale himself is quite interesting. He's a nuclear scientist specializing in protective and detection equipment, especially for neutron radiation. All of the mannequins are motorized (no nuclear engines apparent) and show a method of locomotion to Grandma's house. Dale says he started with five automations ten years ago and adds about one a year. The Hankins have five grand kids. 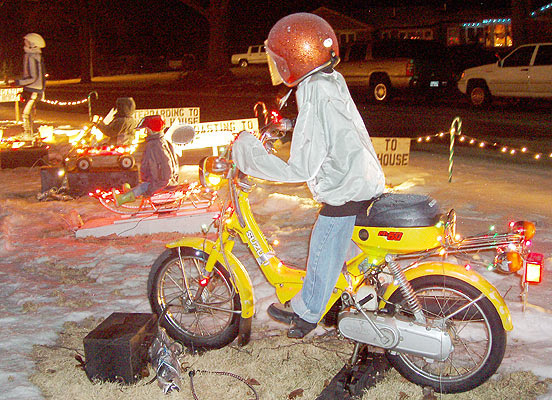 "Cycling to Grandma's House" is built around a working Moped. All but one of the vehicles in the display are real. Note the folded tarp. This was a rough Christmas season for outdoor displays in Hutchinson, as well as much of the Midwest. Dale was out of power for six days, so for a big chunk of the Christmas season, these displays were static or even covered.

I called Dale just tonight (Dec 29) and asked if the display was still up. It isn't. He removed it when he saw the forecast 5" of snow. He explained that since the mannequins wear real children's' clothing, moisture is hard on them.

Of course, I shot a few video clips. I tried to capture the motion of most of Dale's creations. 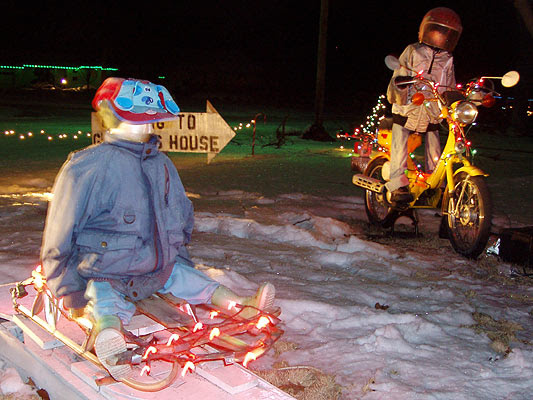 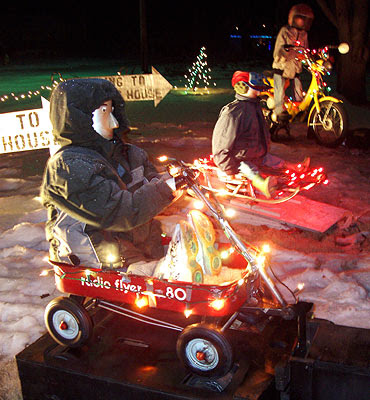 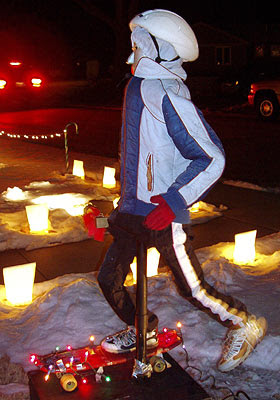 "Skateboarding to Grandma's House" gave Dale a few problems this year. The 1/4" rod that moves the leg actually broke. 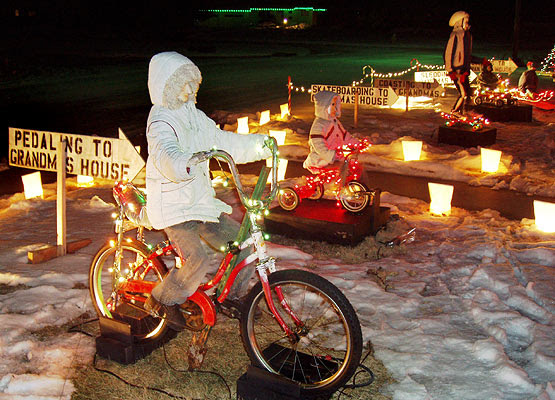 The "Peddling to Grandma's House" sign points to both a bicyclist and a girl on a tricycle. 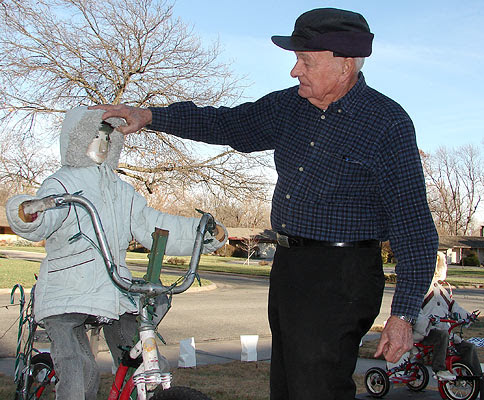 Dale adjusts the hood on the bicyclist. Up close, I find the "grandchildren" evoke 1950's science fiction pulp artwork, which I find quite appealing. 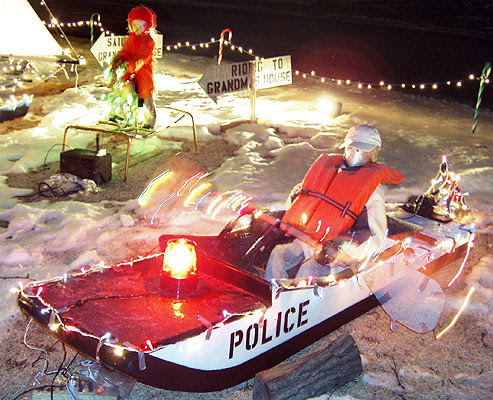 A slow shutter speed combined with flash shows the motion of "Paddling to Grandma's House", a small police boat. 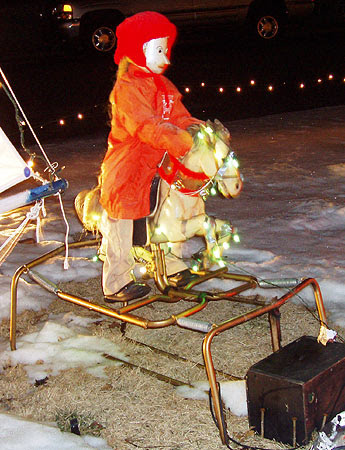 "Riding to Grandma's House" uses a horse on springs. I can't think of what these things are called. 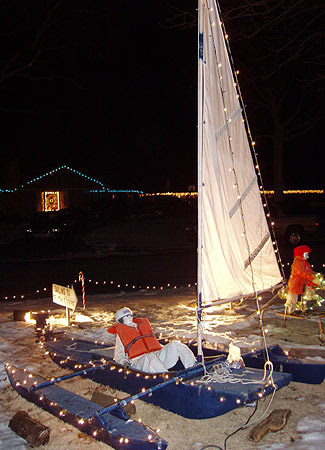 The sail on the outrigger that is "Sailing to Grandma's House" makes it by far the tallest display. "Flying a Saucer to Grandma's House" is my favorite. This is probably because it evokes memories of a Christmas display with a flying saucer atop Fairchild Industries in Joplin, Missouri back in the 1960s. Dale pointed out that the saucer is the only vehicle in the display that is not real.

What a perfect way for the government to dispose of the Roswell UFO - to give it to a scientist who has doubtlessly worked for them, knowing that the best place to hide something is out in the open. What secrets lie under that duct tape? 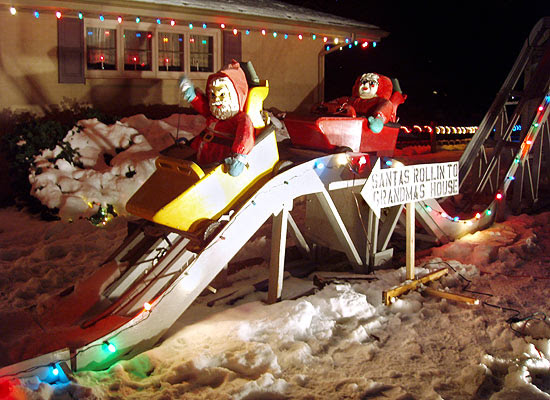 The largest piece is "Santa's Rollin' to Grandma's House" I've already shown Santa in a previous post, but really wanted to expand since I was able to shoot more material since then.


I asked Dale what mode of transportation his next robotic grandchild might utilize. He replied that he's been thinking of an airplane or hovercraft. I suggested a submarine, with it's periscope rotating and an illuminated eye visible inside.

"Don't count on it", he said. Apparently one of his criteria is that the vehicles (except for the UFO) are to be real. I guess even a mini-sub would be prohibitive. And here is Grandma herself - Elizabeth (Betty) Hankins.

And one more drive-by - this on at night.

Dale added something new in 2008; can you spot it? Yep; one of the grandkids is "flyin' a plane to Grandma's house."

hi my name is steven and i have helped mr hankins set up his christmas decorations since 2004. i think it is very nice of you to recognize him for doing this. i dont know about you but ive never seen any other setup like his.