The Lope: Gray Day after the Hutchinson Kansas Ice Storm

This is a continuation of ice storm coverage started here. The widespread Midwestern storm hit Hutchinson, Kansas, on December 10, 2007, and continued through the night, tapering off the afternoon of December 11. 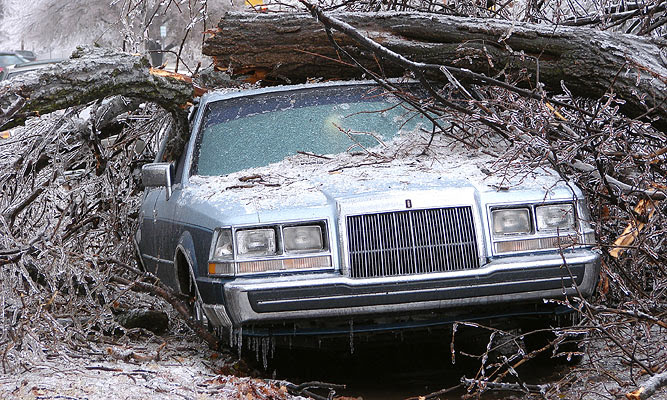 When people say they want a car under the tree this Christmas, I don't think they have this scenario in mind, but it was not a unique sight as people woke up to the damage caused by the ice storm. Many people had moved their vehicles when they knew the storm was coming, but occasionally you'd run into someone who hadn't, or a case like I suspect this was, in which there was simply no place to go for some distance around that didn't have big trees. 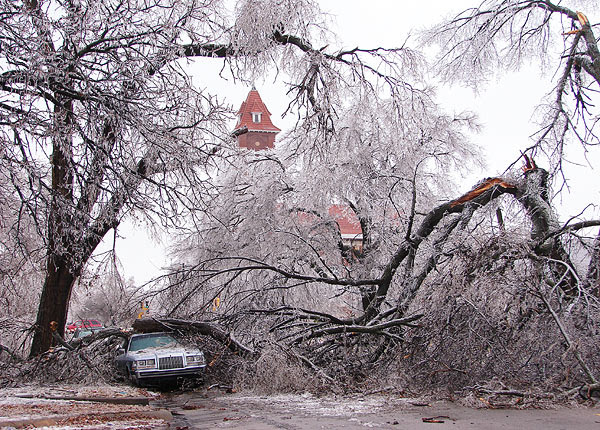 As I was shooting this, a man on his front porch shouted that he wished he had a nickle for everyone who's taken this picture today. That's St Theresa Catholic Church in the background. 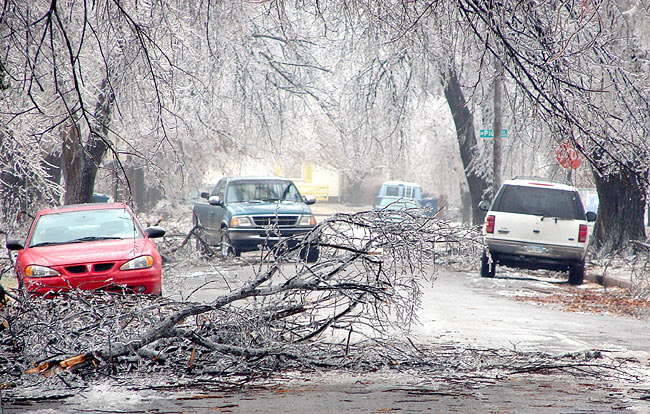 This obstacle course of downed limbs was a typical scene on Hutchinson's older, narrower streets in neighborhoods with mature trees. 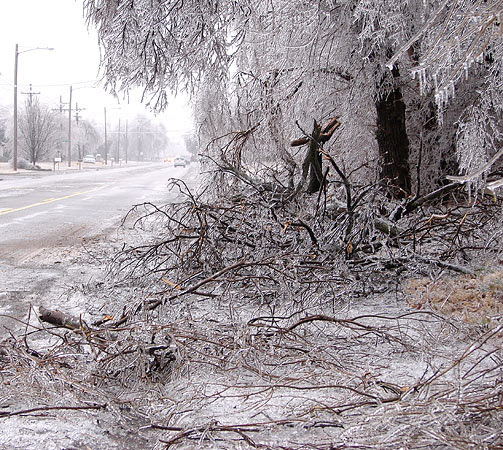 Wider main streets were cleared fairly quickly. I'm curious to see how long it will take to clean this all up. 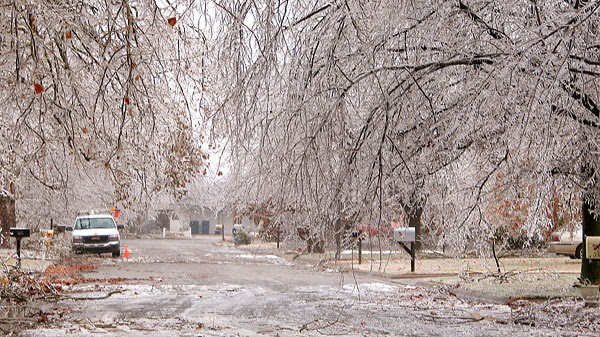 This is one of those "drive under it if you dare" situations. 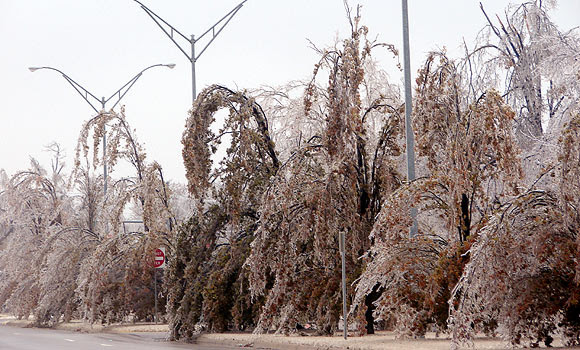 These poplar trees line the median on 11th street between Plum and Severance. They bent, but I didn't see a lot of breakage. 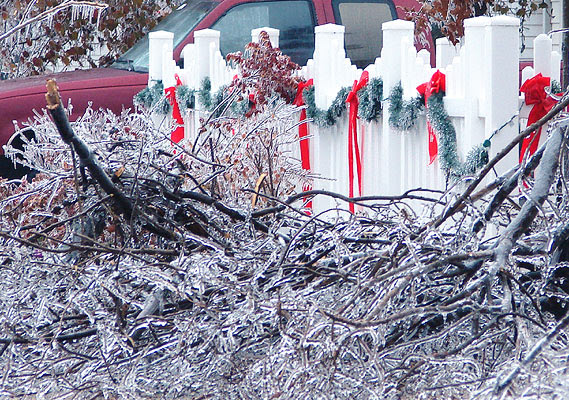 Doubtless you've noticed the almost monochromatic dullness of these pictures. That's the way it really looks. Christmas decorations that had looked so pretty during last night's nocturnal explorations of the ice in the city, succumbed to the overwhelming grayness of the day. I found myself thirsting for anything that had some color. 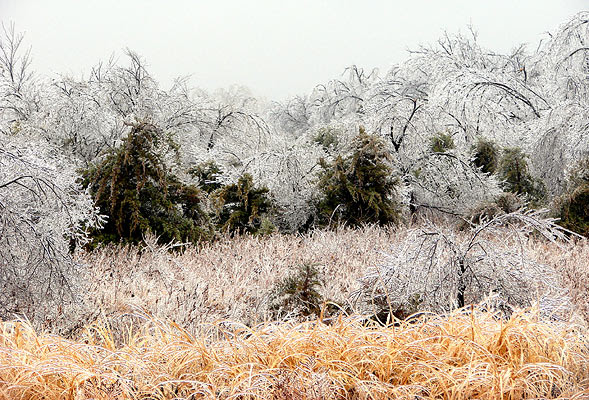 Even this small patch of reddish-brown grass was a welcome variation. 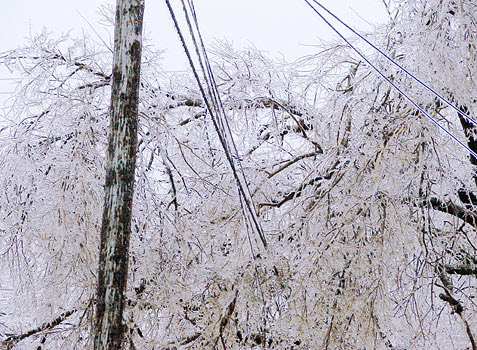 Aesthetics were not the main headache for most residents, nor even were they mine. Ice-laden trees had taken out power lines all of the previous night, and were still doing so today. The loud bangs of exploding transformers became bass drums to punctuate the higher percussion of falling limbs. Power was either off or sporadic for - I would estimate - half the city today. Mine came and went several times. 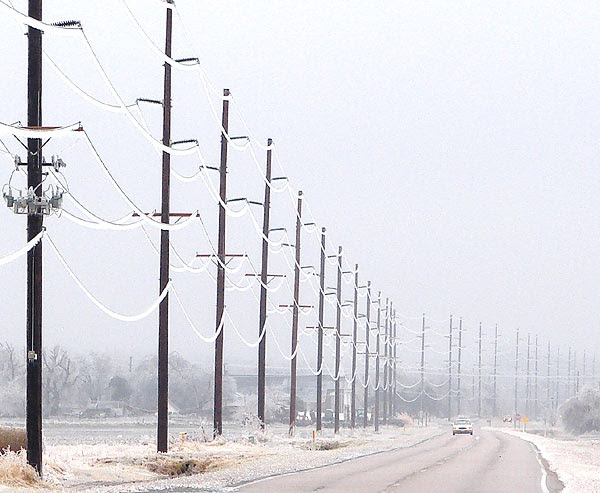 North of the city, these power lines are unlikely to fall due to the lack of trees.

Limbs on roofs were not uncommon. In fact, I have one on my house from a tree that stands on my property line. I've always chided Kansans for a "clear the land" tendency that seems almost genetic, but I'm starting to change my mind. Enjoy a shaded house in the summer or remove a hazard for winter? Decisions, decisions. These folks in a housing division north of 30th Street have used wood supports to make sure this branch does not crack and fall on their driveway.

There's no escaping the conclusion that a city's everyday sights take on a new look when the mercury drops. Bonus points to anyone who can correctly identify this iced object. 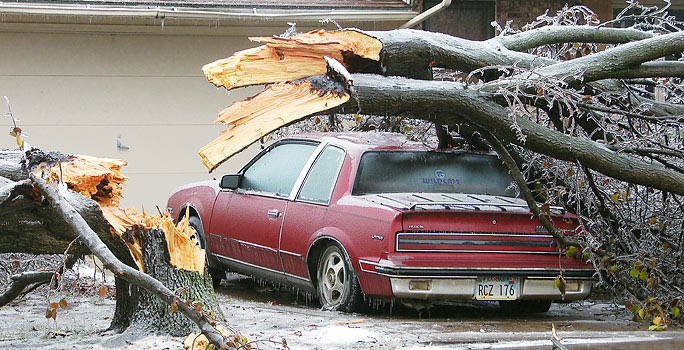 I found this scene - another trapped car - on Idlewild. 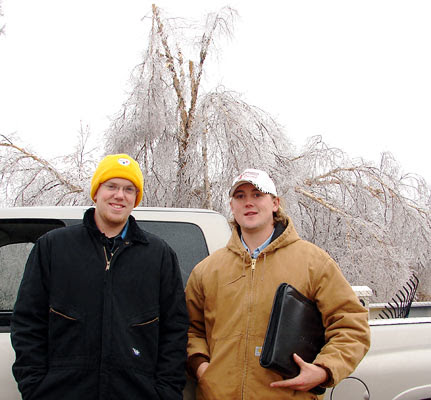 While I was shooting the photo above, part-time tree-trimmer Jordan Whitehead of Andover (right) drove up and asked if it was my house, then, if I needed any trees removed. He says that many people in his profession have converging on Hutchinson. I asked him how he found clients and he said "we just find a street that no one's taken care of and go door to door."

After Whitehead drove away, I continued shooting and the daughter of the woman who owns the house drove by and asked if I was a tree trimmer. I told her one had just been here not one minute before. She said the house belongs to Carol Coons.

I couldn't resist shooting this video clip of Travis Hays hitting frozen branches on Avenue A. He says he has to mow under this tree in the summer. "It always bugged me but I could never break it during the summer so I'm taking care of it now. When summer comes this will all be gone."

I guess the iced object is a rocket at the Cosmosphere museum of space in Hutchinson.

Correct, Sigerson...so far as your answer goes. But what kind of rocket and what part? Let's see if someone else can fill in those details.

If I correctly remember the model replicas I built (poorly) of the space rockets, it's the escape rocket designed to carry the capsule to safety if a disaster occurs on the launch pad. Not sure which capsule, though.

Boy do these make me feel nostalgic and want to go back home to Hutch....AFTER the ice melts! I found this link while trying to do google searches for the ice storm in Hutch to find photos of it. Lo, and Behold, the photographer is a Hutch friend of my fiance, Tom Russell. Greg Holmes of Holmes Photography in Hutchinson, KS took these photos, and has a GREAT and FUN link at www.thelope.com. Open up the blog link, and then enjoy all the photos of Hutch and surrounding towns that we all know and still love. These photos are AWESOME!!! Greg, you are a VERY talented photographer! Love your sense of humor also and read Ace's blog everyday to see what is new. See that you just went to a Trans-Siberian Concert. Tom used a lot of their music for a Christmas light show for his old school house in Chester, NE. Check it out at www.chesterne.com.
Once in awhile, you will see a photo of a lady named Pasty Terrell. She is also a long-time friend of Tom's. Tom told me,"I used to go to Patsy's house for GREAT parties! She was always fixing something EXOTIC like teas." I hope that next time Tom and I go to Hutch for one of his church's sound system maintenance days, that we will be able to meet these two, along with their good pal Ace the Jackalope
- Gail Miller (formerly, Wooten, of Hutchinson,KS)