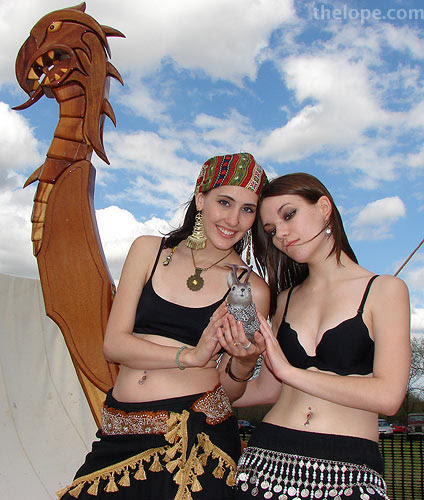 Ace Jackalope joins fair goers Jayna and Laura as they enjoy a Viking boat at the Spring 2007 Great Plains Renaissance Festival held this past April 21 and 22 in Wichita KS' Sedgwick County Park. 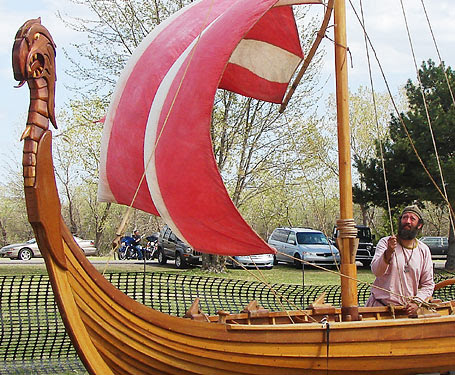 The boat is the property of Sam Shoults, a.k.a. Viking Sam, who is seen here raising the sail, a task he had to repeat at least twice, as the Kansas wind forced him to lower it at times. 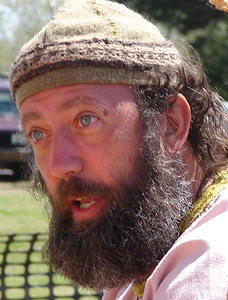 Shoults is a history reenactor specializing in Viking culture. He bought the boat from builder Kerry Eikenskold of Inyokern, California. 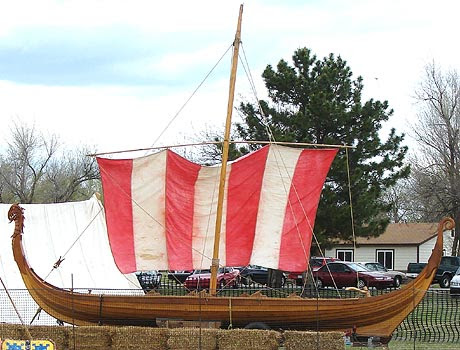 His shallow keel Viking raider longboat is named Yrsa. According to wikipedia, Yrsa is the name of a tragic Scandinavian heroine. 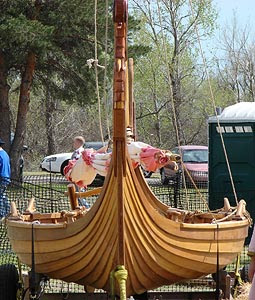 For those of you into historic boat recreations, here's a front view. Yrsa is constructed using the "lap-strake" or "clinker" design of slightly overlapping wooden planks. You can read much more about Viking ships here. 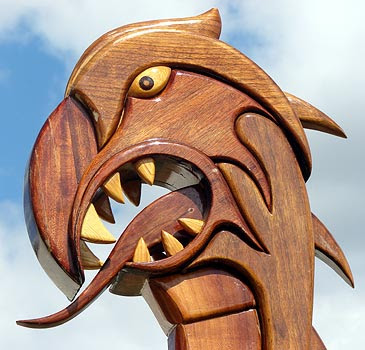 Longboats are sometimes called "dragon ships" for obvious reasons. If you take a liking to Viking ships, you might consider watching the Viking longboat races on the Isle of Man in the UK. 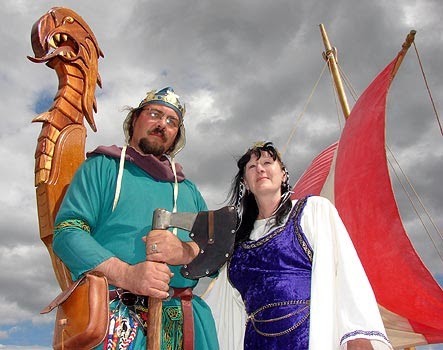 The boat was also a background favored by Anthony and Deborah Russell of Wichita, who appear here in their Society for Creative Anachronism identities as Baron Thomas Foxleye of the Grenewode and Baroness Cerridwyn Eurgledde ferch Owain ap Bychan ap Gruffudd ap Llywellyn ap Siesyllt ap Meredudd. I must make a mental note to not attempt to identify people in the future with names that long.


And just what is the Society for Creative Anachronism (SCA)? From the website of a local chapter of the SCA: "The SCA is an international organization renowned for its dedication towards researching and recreating aspects of the Middle Ages, not as they were, but as we would have liked them to have been." More information can be had here.

Armed combat is a common recreational pursuit in the SCA. Here, two SCA members battle with padded rattan weapons. I've seen the SCA at every renaissance festival I've attended, but had never stopped to watch them. The yellow strip on the weapon denotes what would be the sharp edge, were it actually a blade. I'd rather look at the Skeletor-like helmet than the weapon; it reminded me of watching an action figure fight. 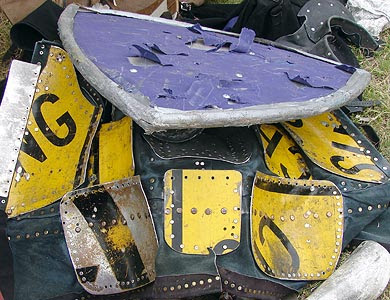 Now that's recycling. As this inside view shows, this armor is made from a (legally obtained, I am told) yield sign. Warriors bash each other while keeping track of what would be wounds if the weapons were real. They largely use the honor system to report whether they'd be injured and to what degree, and I saw no conflicts while I was there. This young woman, known locally as Meg the Sexy Faerie Girl, is one of Ace's readers. We're always thrilled to run into a reader in the real word. I know about how many people view this blog, and even have good stats on their geography, but I seldom get to meet any. Stats are nice, but real faeries are nicer. Meg had waited til I got her photo with Ace to remove the wings, which were problematic in the Kansas wind. 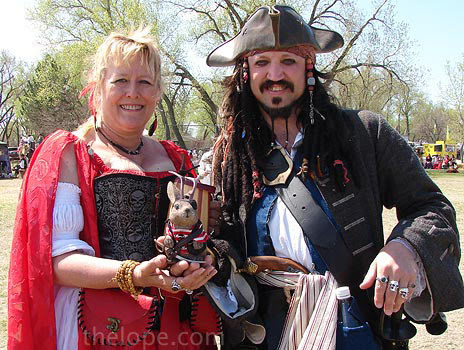 Pirates seemed more in evidence than usual this time, partly due to the popularity of Disney's Pirates of the Caribbean movies. This is Rick Rousseau, whose card identifies him as Captain Jack Sparrow. Where there are pirates there are pirate wenches. This is Sheila of the piratical entertainment group Musical Blades. I like "piratical" as a word; mind you, I don't know if it's really recognized, but I don't care as it sounds cool and is self-explanatory. They use it on their website and who am I to argue with people with swords and wenches? The "tree lady" was particularly floral this year. It's the third year I've photographed her, having seen her in Spring of 2006 and Fall of 2005. I just can't seem to pass her up.

This time, she was listed as "Mother Nature." I still think of Tolkien's Entwives, the long-departed mates of Ents like Treebeard, which were mentioned in Lord of the Rings but never described.

The festival has it's own royalty. Ace pays a diplomatic visit to Allen and Christine Leddon, a.k.a. His Royal Highness Axel Hans Von Blingenstein & Her Royal Highness Catherine d' Bajor. The rest of the royal court. 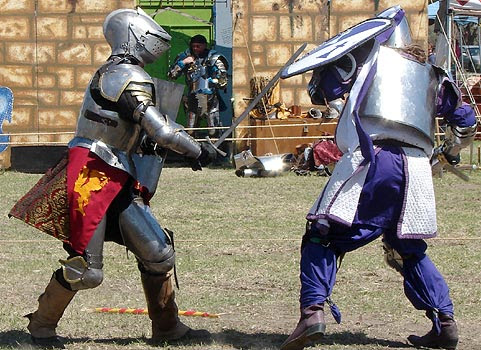 Once unhorsed, combat continues on foot. 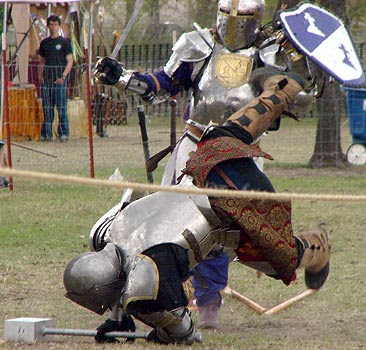 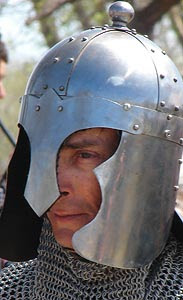 There were two belly dancing areas at the festival. They furnish a nice balance to the testosterone of the fighting. Very nice wenches! If I dressed up as a giant bunny, do you think I could get wenches, too? Or do I first need to get in touch with my inner lope?

It's not hard to get wenches at a renaissance festival, sigerson. Just get yourself drunk (or act like you are) and be very outgoing (almost to the point... no wait, PAST the point of downright crassness). One of them is bound to take you home :P