The Lope: Dances with Ducks

This is one of those posts that kept getting back-burnered until I thought it'd look terribly out of season - I mean, it's full of snow after all, and it's Spring already. Yes, it is Spring and by nearly a month. As I write this, the date is April 20, but it just snowed a few days ago so I guess I'll run this. And so, not so distantly out of season after all, I bring you a snow-blanketed day back in January, a jackalope and much mayhem over a loaf of bread. 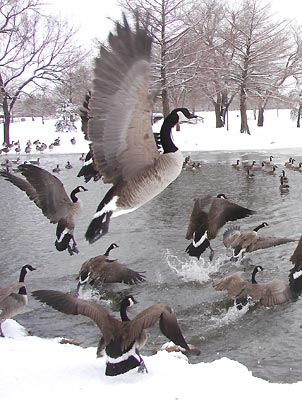 That fine and frosty January day - after a trip to the cemetery and before zoo and the movie - I went down to Hutchinson KS' Carey Park in search of anything cool and snowy. I wasn't disappointed as I soon found this flock of Canada Geese with a few ducks mixed in. 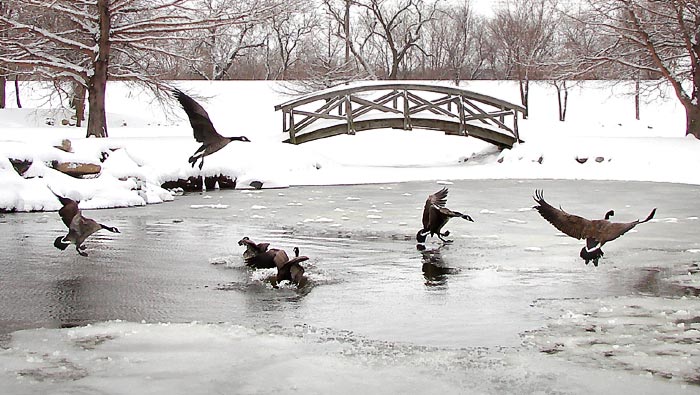 The day was heavily overcast and I normally don't like that, but the snowy landscape made it look as if someone had taken White-Out to the mundane parts of the scene and left us with a set composed only of forms for our winged actors.


As I watched the geese, three things occurred to me: 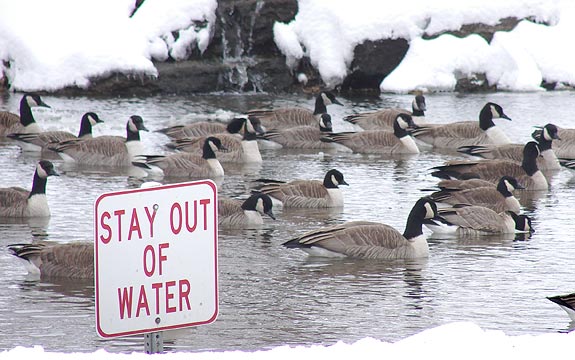 1. Geese either cannot read, or they just don't care. 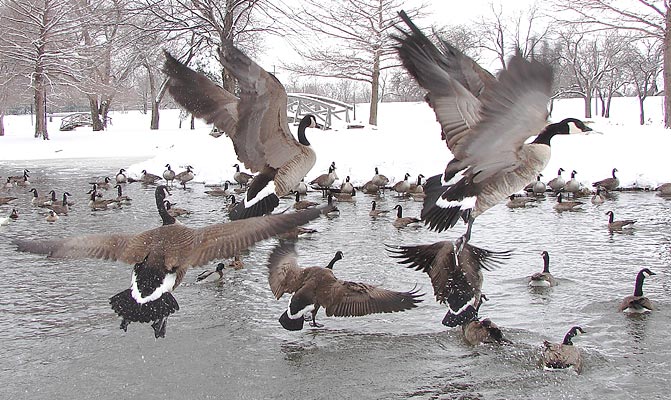 2. A flying goose in a certain position looks like a Klingon bird of prey.

3. Other than that useless bit of geek insight, I know little about waterfowl.

So, I decided to put in a few minutes over three different days to photograph some of the birds and learn about their species.

I needed them close enough to photograph but didn't want to be at the center of a feeding frenzy, which is pretty much what happens when you approach them with bread. The dinosaur-to-bird theory gains credence with me when I'm at the center of a Velociraptor-like pack of these beasties, so I needed a partner. Toward this end, I enlisted the aid of Ace Jackalope to do the feeding while I hung back with a telephoto lens. 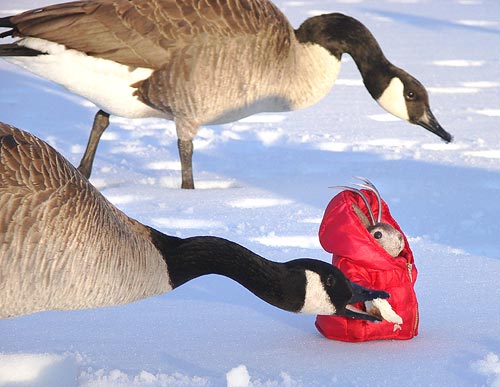 Geese aren't the smartest things in the world...or maybe they're just suspicious of small red intruders in the same way that pigeons are supposed to avoid plastic owls. I actually had to lead them to Ace by creating the proverbial trail of bread crumbs. 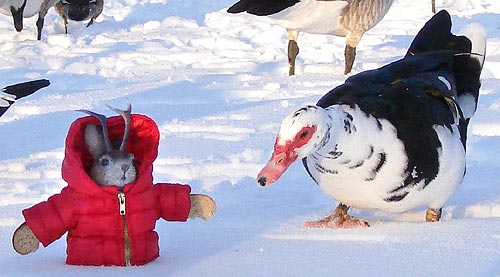 On each of the three days we tried this - at first - some would approach Ace but veer off after a closer look at his front. Sometimes the same birds would take the bread readily when approaching him from the back. I wondered if his eyes, nose, etc., might fit into whatever mental template they have for other animals, at least enough to cause hesitation. That's pure speculation on my part, by the way, and I would point out that the same birds readily take food from the humans in the area.

In any event, it took several minutes for some of them to be as comfortable taking the bread when approaching Ace from his front or side as they had been from his back.

Eventually, apprehension gave way to the realization that a free meal was at hand. 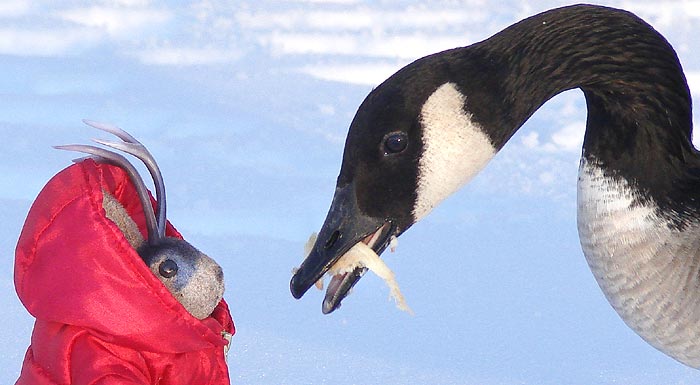 Still, some geese would linger and regard him, though I haven't a clue as to whether they were thinking "threat?"..."food?"...or not thinking at all and just standing there. This shot reminds me of a moment from one of the Aliens movies when Sigourney Weaver is face-to-face with an alien. 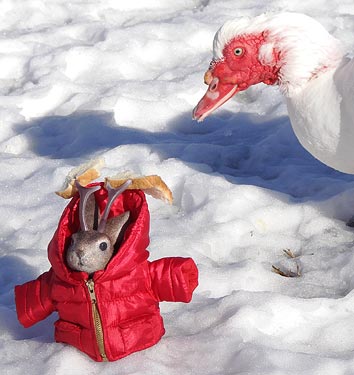 We tried several methods of placing the bait. 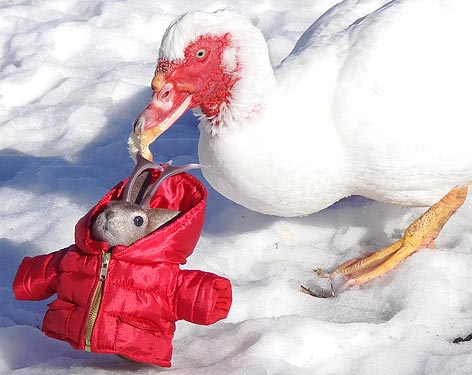 But antler-mounted bread proved to lead to toppled jackalope, as this duck demonstrates. Still, I got something from this shot that I wanted to illustrate. See the claws on this duck? It's a Muscovy, and the talons enable it to grab tree branches, where it roosts. 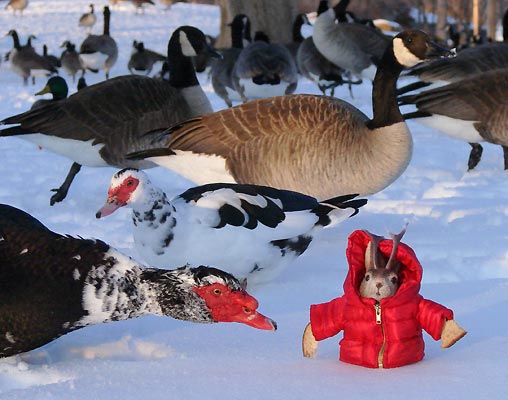 As a matter of fact all of the ducks that approached Ace were Muscovies, and they tended to be more aggressive than most of the geese and all of the Mallards. This is not surprising since, according to wikipedia, they are a very aggressive species. 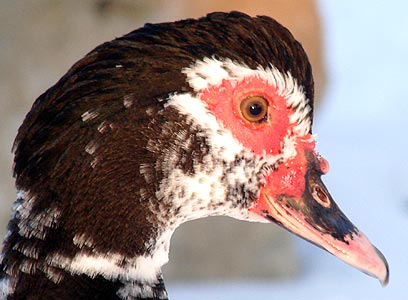 According to Oklahoma State University, Muscovies (I've also seen it spelled "Muscovys") originated in Brazil and are the only domestic ducks not derived from Mallards. They are not migratory, are often ex-pets or descendants of same, and tend to compete with local populations. 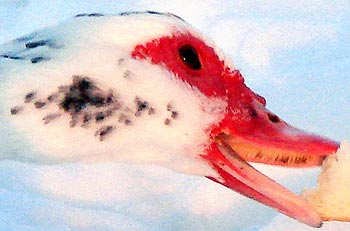 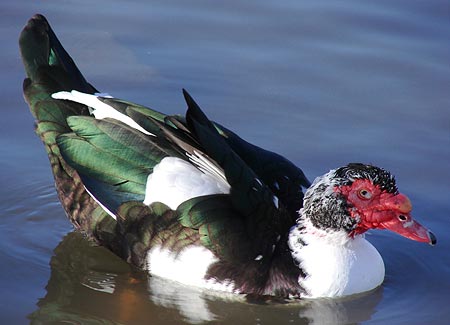 They are also bred deliberately for food in some areas, and are said to be stronger-tasting than Mallards. 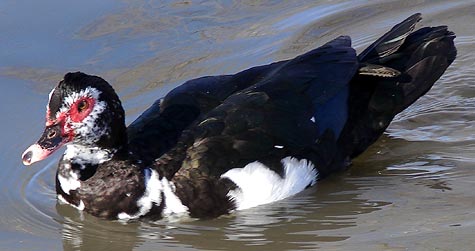 The variety of coloration in Muscovies really threw me off when I tried to identify the various ducks. 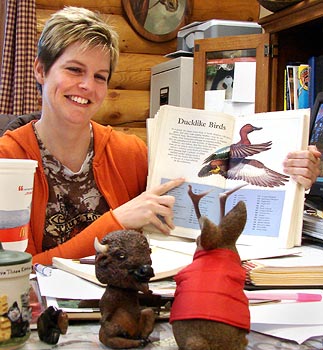 As a matter of fact, it wasn't until a few days later when we visited Hutchinson Zoo Curator Kiley Buggeln that we were able to ID the ducks. I still remember the slight sneer in her voice when she said "Muscovy" as if she were referring to Al Bundy having just moved into the neighborhood. It was really quite amusing. 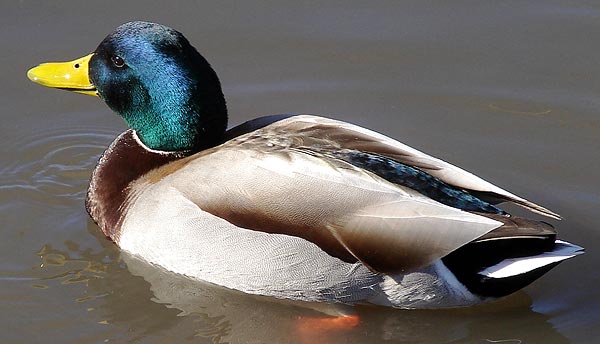 Back at the nearby Carey Park pond, Mallards were present, but had little interest in procuring bread from a jackalope. 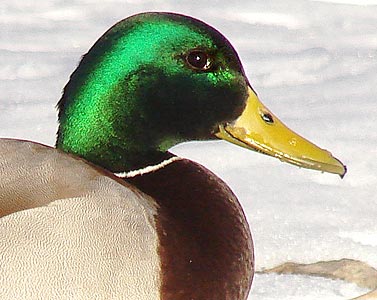 Mallards are one of those taken-for-granted life forms that, had you never seen one, would seem quite exotic.

As to the geese, You can see how "goose-neck" lamps got their name. 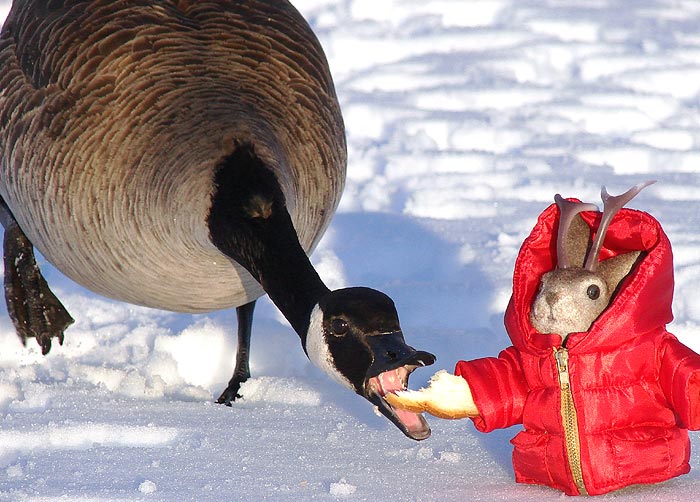 Eventually, I got the shot that I wanted, one which I could appreciate the dinosaur-like gait of the beasts, and the thunderous power - on their scale - of their approach. An aesthetic bonus is that the head and neck look like they are emerging from a dusky tornado of feathers. You can really see how the circular overlap of feathers streamlines the animal. 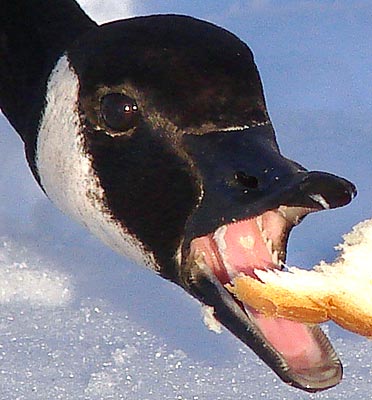 Check out the teeth. No wonder kids cry when they're bitten by these things in petting zoos. 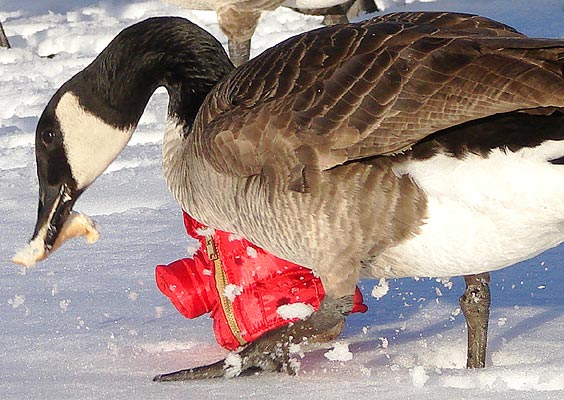 As the geese gained bravado and sought more to compete with each other for Ace's bread, more incidents like this aggressive knock-down occurred. 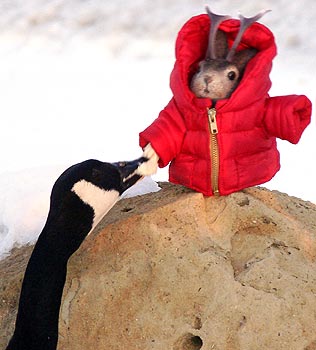 It became safer to have a little elevation in order to keep the beasts from approaching him with so much momentum. Even so, the light was getting low as the sun went down, and shutter speeds, longer. 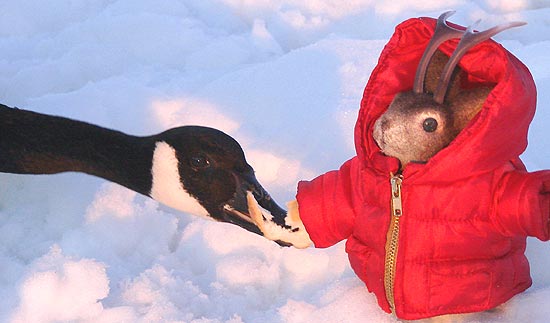 It was that simple, saturated color time of day when the snow is blue from skylight, in contrast to the last red rays of the sun. 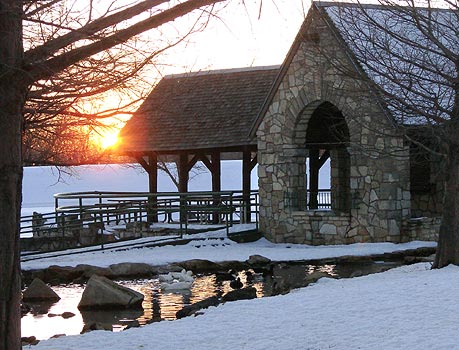 When will "Where is Ace?" come back?

Another excellent post -- and a fine example of why this blog is so good. We learn something, but in a fun way. It's not just another waste of bandwidth polluted by self-absorbed ramblings.

Perhaps Ace should get hazardous duty pay for being in the middle of the feeding frenzy.