Today is Fat Tuesday, also called Mardi Gras. Harlequin-types abound and there is much exchanging of beads. 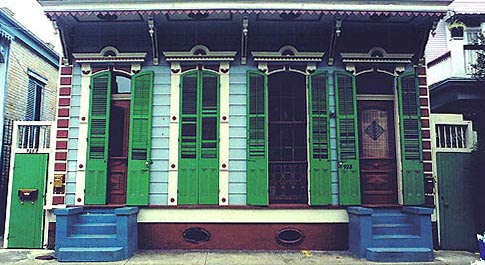 I always find it interesting to see how the residents of an area view tourists and the media, of which I am definately one and nebulously the other. It's the same curiousity that causes me to look at local newspapers wherever I go, a trait I picked up from my brother. If you're the curious type also, you might enjoy this link to a group of articles from the website of the New Orleans newspaper, The Times Picayune. It spans their pre and post Mardi Gras coverage from 2006 and 2007. It's an insight into the way they see us seeing them, post-Katrina - the view of the fish looking out of the cracked bowl, I suppose. 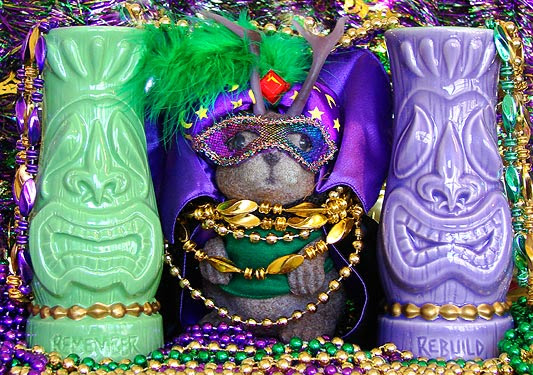 This past year or so, New Orleans is inseparably associated with crime. However, when I think of the city these days I have only to glance up at a shelf to remember an act of kindness bestowed upon one person by a large group of people - most of whom she had never met - and her subsequent gratitude. Last year, members of the internet group tikicentral helped one of the group's flood-sticken members by purchasing special edition tiki mugs, designed by the member herself and made by Tiki Farm, which sent her a check from the profits. I didn't have a set in time to include them in last year's post, but here they are in the three colors of New Orleans' Mardi Gras: green, purple and gold. They also feature the fleur de lis, a symbol of New Orleans, in the design. You'll also notice the tragedy and comedy masks paired with "remember" and "rebuild" on the base. It was a nifty way to help someone - a win-win solution all around. 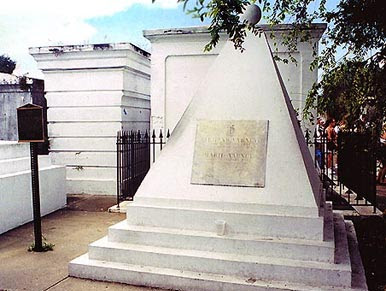 Since last year's post, I've had requests for more cemetery pictures from New Orleans' Saint Louis Cemetery #1. Apparently, a small but vocal portion of my readers love cemeteries, and that's cool. I didn't take all that many pictures on that 2001 trip and I used most of them last year, but I did find these. 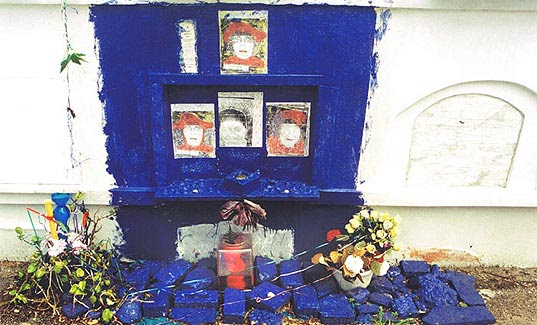 This was one of the vaults in the inside of the outer wall. There was no legible writing on it, so I'm afraid I do not know its story. Perhaps one of you does?

posted by Ace Jackalope at 7:00 PM