The Lope: You Can Have A Steam Train

You Can Have A Steam Train 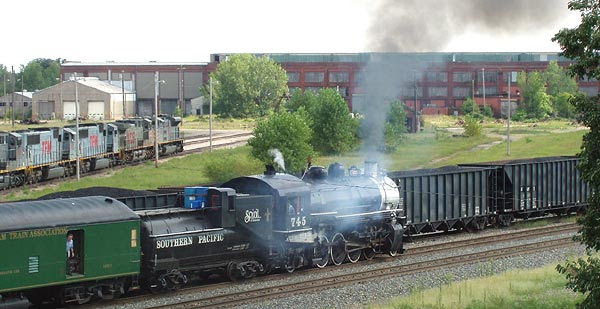 745 steams into the Kansas City Southern railroad yard, behind the old diesel shop, just after arrival.

The 2-8-2 wheel arrangement shows clearly in this photo. 745 uses a kind of tender I've never seen; I'll add details when I get them.

Two of the passenger cars for this weekend's excursions are visible here. There will also be a diesel on the back end to help the train return to Pittsburg after the excursions carry the coaches a few miles into the countryside. People power to man the passenger cars will be made available by the Heart of the Heartlands Railroad Club. Those coaches are air conditioned, by the way. 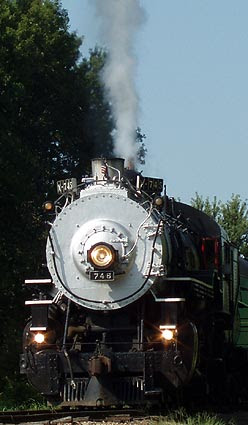 They call them steam engines for a reason. 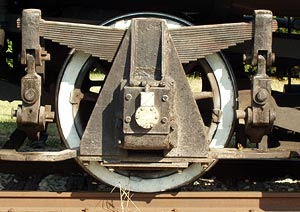 I always love looking at the details on these things. I believe this is called spring rigging. 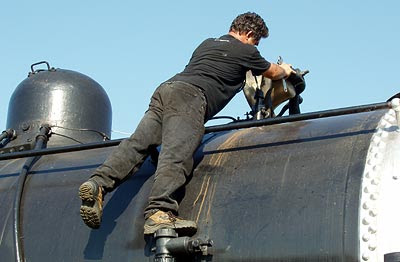 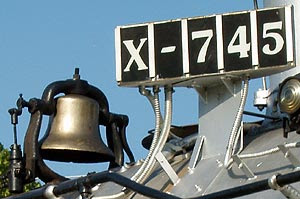 The bell is original to the locomotive, which was built in 1921 out of spare parts in The Southern Pacific's Algiers shop, New Orleans, Louisiana. The whistle is not original and is on loan from an engineer; it is quite old and valuable in its own right. I learned an interesting thing today: engineers of steam locomotives sometimes had their own whistles with unique mechanical touches that would alert those in earshot as to who was driving the train. 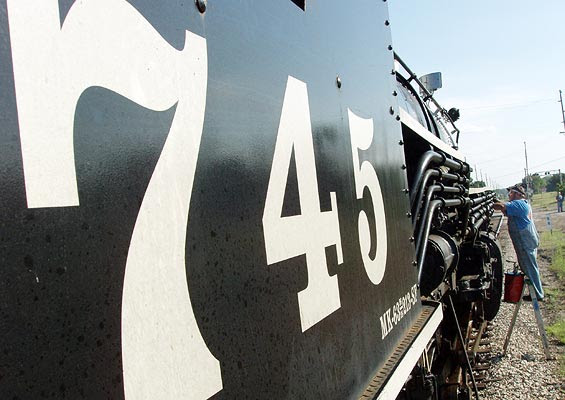 A crewman lubricates the locomotive; steam locos take a lot of maintenance, one of the factors that lead to their demise. 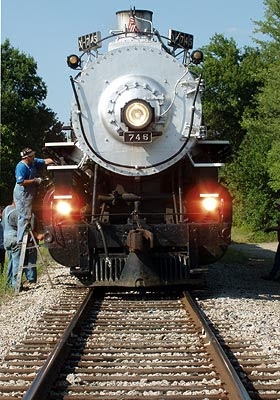 This particular locomotive was retired in 1956 and became one of the ubiquitous city park steam engines that dot the country when it was placed in Audubon Park in New Orleans, a fate that lead to neglect and vandalism. 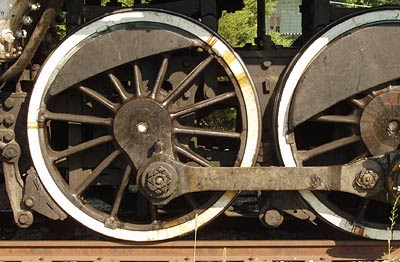 Audubon Park was not to be the final resting place of 745, however. In 1984, the Old Kenner Railroad Association obtained the locomotive, hoping to eventually restore it. In 1997, the newly-formed Louisiana Steam Train Association kicked the restoration into high gear; by 2004, 745 was able to run again. Bruce Brown, President of the Louisiana Steam Train Association was acting as 745's fireman; here, he poses with Ace Jackalope while answering a few questions about the cab. Though the association's website does not mention it, Brown informed me that about 50% of this weekend's proceeds will go toward Hurricane Katrina victims. 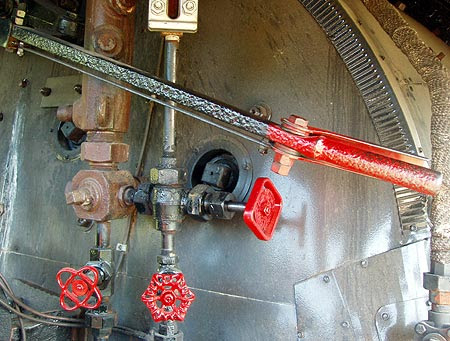 These valve handles are replacements. That lever is the throttle, by the way. This is the engineers view. The cab is not part of the excursions this weekend, as far as I know, and that's just as well because it's hot up there...about 120 degrees, I'd estimate.
UPDATE: between runs they did let people up into the cab. I'm always impressed when an organization trusts people not to be stupid, and as far as I know, that trust was well-placed. 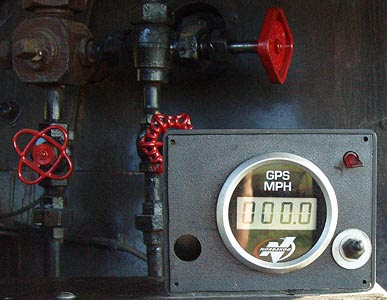 This GPS is a very practical bit of modern technology. By the way, this weekend's excursion trains will slowly voyage SW of Pittsburg on former Frisco tracks and will take about 90 minutes. Even in the somewhat grimy cab, some of the older elements seem downright artsy. 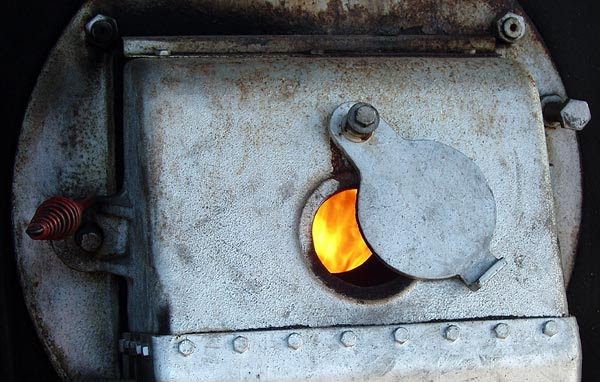 Fire is the heart of every living steam locomotive. And with intense heat and pressure, there's a lot to keep track of. A steam engine isn't something that, once fixed, always stays fixed. Tools abound. 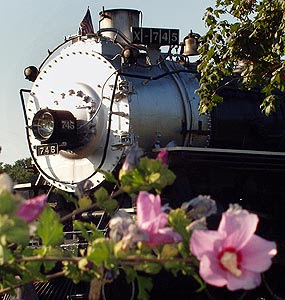 "There's a steam engine in my shubbery!" 745 is parked right by someone's yard. I always envy such people.


The train will load passengers at Pittsburg's Elm and Monroe Streets for excursions toward Cherokee, KS, leaving at 10AM, 12:30PM and 3PM today and tomorrow (Saturday, Aug 5 and Sunday, Aug 6). Tickets are $20 for adults and $10 for kids under the age of ten. Very young offspring may ride free on laps.


I've ridden another train through that stretch and it's a nice slice of Southeast Kansas - no more, but certainly no less. You'll see fields, strip pits and probably some wildlife if you keep your eyes peeled. And more than that, you'll hear the whistle of the train as it approaches each intersection, and get to wave at onlookers. I do recommend it. And did I mention it's air conditioned?


For more information, see the press releases of the Louisiana Steam Train Association and the Heart of the Heartlands Railroad Club.


UPDATE: for pictures and coverage of the weekend's train rides, see the post, 745.

And if you're a stream engine enthusiast, check out my encounters with 844 earlier this year:
844 (Salina, Abilene, Herrington and Hutchinson, KS - lots of night shots
844 Returns (844 in Claremore, OK)
844: Riding the Iron Horse (woo hoo! I get a cab ride!)
Goodbye, 844, 'til we meet again (Train ride from Coffeyville to Kansas City)

I was born and grew up in a depot. When about 10 the train crew took me along to the end of the line. Rode in the engine! Got to blow the whistle and ring the bell, was not big enough to pull the throtle! Tried though! Shoveled coal to the boiler, engineer got on me for not keeping up enoug steam--in fun! 78 now! Roy

Thanks Ferd, I fixed it. And happy trails to all of the crew!

Great photos! Correction: 745 was built by Southern PACIFIC, not Southern Railway as you wrote.

can we use any of the pics and videos on our web site please email the webmaster at webmaster@lasta.org

Very Great Pics of 745!!
I Waited To see Her In Fort Worth Today,Only to Find Out she weass Sidelined Due To Mechanical Problems!!
Hope She Comes Back Soon!!
You Know What'd Really Be Cool?? Have ASTA 786 Run South From Burnet and LASTA 745 West from New Orleans and Have Them Meet In Flatonia Then Combine Trains and Steam West to San Antonio or South To corpus Christi From There!!
John T.Patterson.Mansfield,Texas

Thanks to all who wrote with additional data. John, I didn't even know 745 was supposed to be in Ft Worth or about ASTA 786 at all. It looks like another fine locomotive and I'll cross my fingers for her future. For 745 updates in the future, I recommend joining LASTA and using their yahoo group (link is on their site). If you want to see two steam engines together, I believe something of that nature with two different locomotives is planned for September in Iowa; I don't have specifics, but if you're plugged into railfan channels, someone will know more. Happy rails to you all!