Nevermore will he gaze protectively over Texas fair goers while hawking the latest show or sponsor - Big Tex, the 60 year-old, 52 foot tall cowboy mascot of the State Fair of Texas burned this morning. Early reports imply an electrical fire. 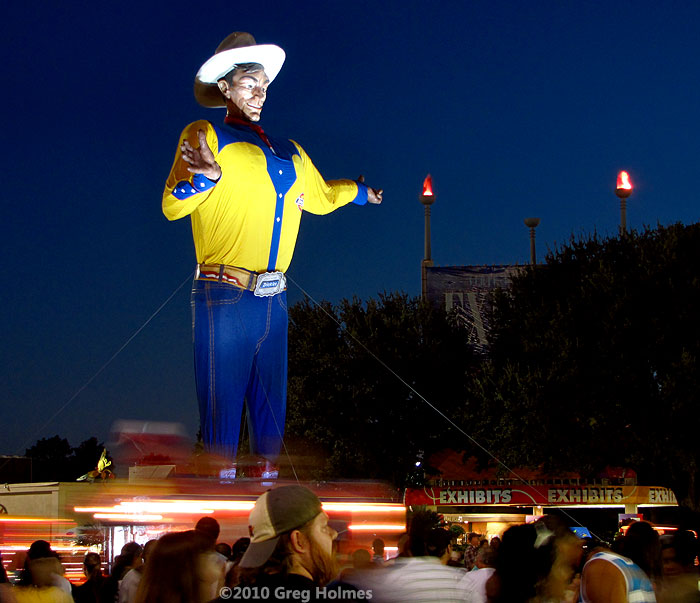 I must confess I hadn't heard of Big Tex until a "King of the Hill" animated TV episode featured him. After that, I resolved to travel to Dallas and see the giant, which was put up annually only for the fair and kept in storage the rest of the year. He could be stored so easily because he was more like an erector set with a head than the fiberglass giants roadside aficionados are used to seeing. A friend and I visited Big Tex on October 16 and 17, 2010, when I shot these photos and videos. Big Tex has been able to speak since modifications were made in 1953.


Here's a little video I threw together from clips I shot in 2010:


The light parade in the middle of the video is also a State Fair of Texas tradition. Here's the whole parade from October 17, 2010. I chose my filming positions to include Big Tex. It takes something mighty big to compete with the gargantuan collection of Art Deco architecture on the fairgrounds, an example of which is seen at left. Big Tex is a large part of the fair's merchandising, as seen in these gift shop shirts. His clothing does change from year to year. 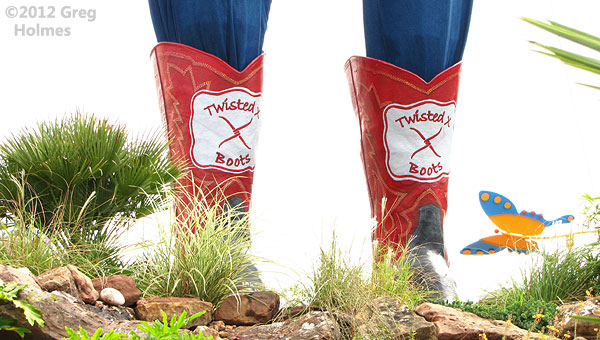 And he was not immune to sponsorship, as shown by these Twisted X boots. According to sources in Dallas, Big Tex' Dickie belt buckle survived the fire, along with his hands. 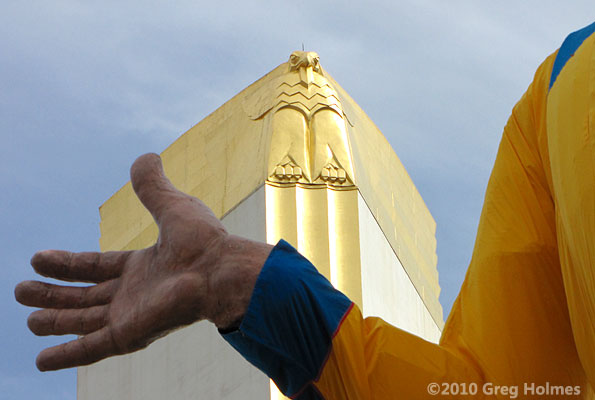 The right hand waved when I was there. I have read this feature was added in 1997. I'm glad I had the opportunity to meet Big Tex and take his photo with Ace Jackalope. I'd been on a quest to visit one new (to me) state fair a year since 2008. I'm glad I wasn't saving Texas for later. The fair has already announced that Big Tex will be rebuilt. I could look at this as another case of "it'll never be the same" but I choose to see it as a road trip waiting to happen.

posted by Ace Jackalope at 6:06 PM

Very happy Ace Jackalope & Big Tex had the pleasure of meeting each other before it was too late.