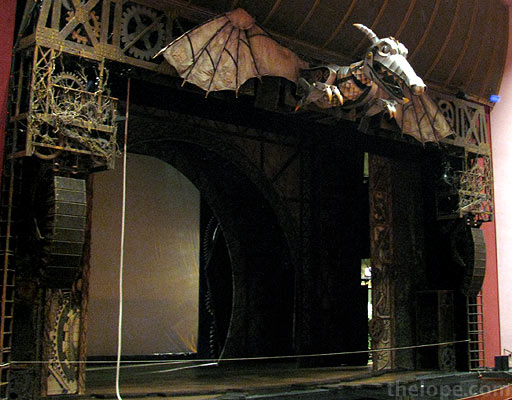 I saw the play, Wicked, last year in Wichita. No photos were permitted during the performance, so this shot of the stage will have to do. 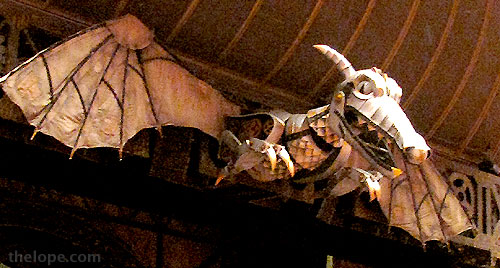 The dragon alone is pretty cool; it moved a few times and had cool lighting. Having just come out of Halloween, I coveted both it and a huge Wizard head they use.

As to the plot (no spoilers), it's a prequel to the Wizard of Oz, with which it meshes in a continuity that most sci-fi shows should envy. It also elevates - literally - the Wicked Witch of the West into a high-octane heroine.

My friends and I were in the cheap seats in the last row of the balcony at Century II (and I'd recommend small binoculars for that) but it still looked good.

A note to others attending Century II auditorium shows: for Wicked, there was a spotlight on a platform that impaired the view for the people in the center of the back row, just to the left of us. I don't know if it's always there, but you might call the box office and ask before you buy tickets in that spot to another show.

I've only seen three Broadway-type shows: Camelot with Richard Harris way back in the 80s, Spamalot with Tim Curry in 2006 (notice a theme here?) and now, Wicked.

Oh, there was one other one: Le Miserable at the Starlight Theatre in Kansas City a few years back when my girlfriend had free tickets. I wasn't crazy about that one and it showed why I'm a bit dangerous to take to such shows.

(Spoiler alert) There is this kid in Le Miserables...you know the type - speaks big adult words like a little Cosby kid...the kind of over-cute tyke engineered by writers to appeal to grandmothers who buy "time out" dolls and Precious Moments figurines.

Anyway, the kid dresses in way-too-big adult clothing, climbs a barricade, shouts something guaranteed to draw the attention of the enemy, and CRACK! - big surprise - he gets shot dead.

As women gasped in surprise and horror around me, I was relieved I wouldn't have to hear anymore of his predictable dialog and said, apparently quite aloud: "that'll shut him up!"

I'm happy to report I caused no such awkwardness at Wicked, although I did consider saying "hey, this doesn't suck after all" but stopped myself. And did I mention the dragon is cool? 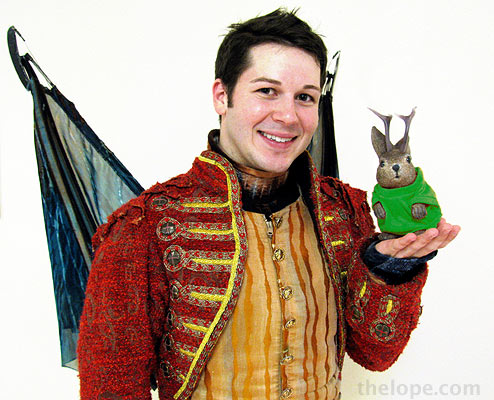 After the play, Ace got a photo-op with the lead winged monkey, played by KC Fredericks. Real flying monkeys would have been cool, but I suppose the years spent in genetic engineering would really hike the ticket price. Besides, they'd just fling dung from on high. Now, if 'Le Mis' added flying, stage-confined dung-flinging monkeys, it might be worth considering again.