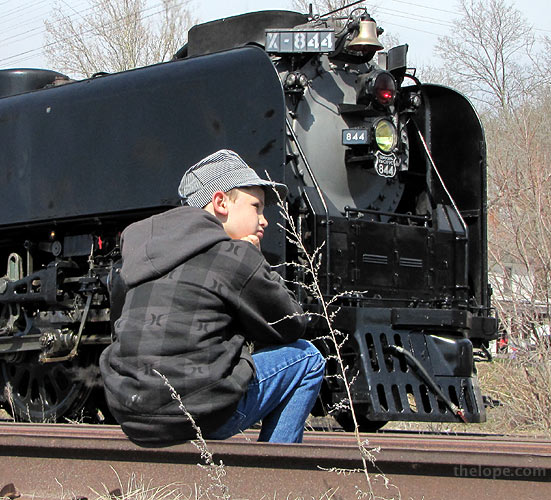 A boy and a train - where is Norman Rockwell when we need him?

Union Pacific's steam locomotive number 844 is on the move in April, pulling a business/executive/public relations train called the Valley Eagle Heritage Tour through parts of Wyoming, Nebraska, Kansas, Missouri, Oklahoma, Arkansas and Texas. The trip will take most of April. Consult their website to see if it's coming near you. The photo above was shot Saturday in Marysville, Kansas, as the locomotive was being serviced at the end of its day's run.

I've previously pursued this sleek sports car of a steam engine on several occasions and have shot many stills, so this time around I decided to shoot HD video on the second day of its voyage as it passed through parts of Nebraska and Kansas.

After scoping out the train's route using the UP website, the Nebraska DeLorme atlas, Mapquest and Google satellite, I picked a 3.3 mile stretch of dirt road just east of Belvidere, Nebraska, for the initial interception. Although a rough dirt road would not have been my preference, I picked this stretch because the track runs on the north - and therefore sun-lit - side of the road.

This took some preparation on the part of my most capable driver, Sharon, and I. We practiced a couple times driving alongside a freight train and discovered that wind noise from the car was minimized by keeping the windows opposite the open filming window cracked a bit. Also, I had to remember to stay well inside the car to keep the camera's microphones away from the car's airstream. We used a droid phone to track the train via UP's very nifty GPS tracer page.

After the stretch of track seen above, we lost the train when the track cut diagonally away from the road. If you like to find practical uses for geometry, you need look no farther than such a case - the train track crosses diagonally over section roads, forming a right triangle. Using the Pythagorean theorem, the train is running on the hypotenuse of a right triangle and you are driving the sides. If you know the train's probable speed, you can figure out how fast you'd have to drive to intercept it at both section road crossings. Fun, huh?

We were able to catch up to the train and parallel it where highway 8 runs from Fairbury to Steele City, Nebraska. Here it is between Fairbury and Endicott:

Here it is near Endicott:

And this one was shot as we approached Steele City:

You can see the picture overexpose as I zoom in to 844. This is because the locomotive is black and there is no way to set manual exposure for video on the camera I'm using, a Canon SX1is in video mode. Basically, it's a complex point and shoot camera that does HD video. You can do some exposure compensation in video mode, but only after you've started the video, and it's too awkward a process to carry out while being bounced around in the back of a car trying to be a human shock absorber. I didn't try many stills during this stretch. I was shooting into the bright part of the sky and the locomotive was running on flat land so not laboring and smoking much.

We just barely got to this railroad trestle in time to see the train. I believe this is Herkimer, Kansas:

The train reached Marysville, Kansas, just after 3 PM and the crew began watering and lubricating it. Such was the downfall of steam power, for diesels require lass labor-intensive maintenance of this sort. 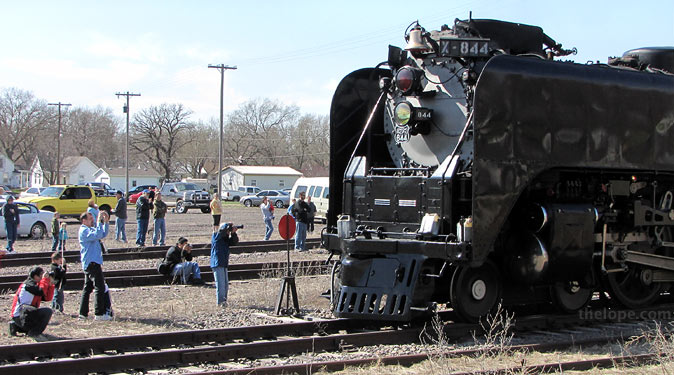 While this maintenance proceeded, 844 did what it always does - it drew a crowd: 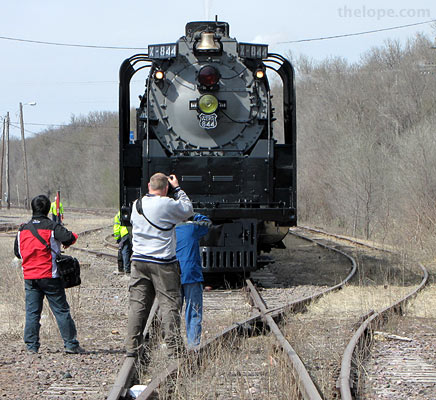 Here's a 360 degree video of the people around the engine: A visit from a steam engine brings out a nice mix of people in any town. As I walked through the area, I overheard several people recounting their memories of the steam era. Here, Rod Lamoreaux points out locations of buildings gone by. 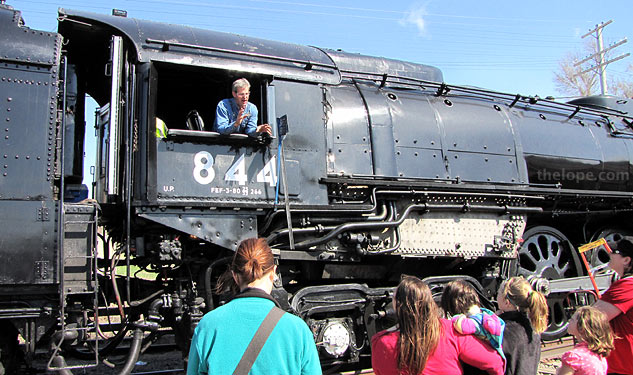 Ed remembered Ace and offered to hold him for a few photos. 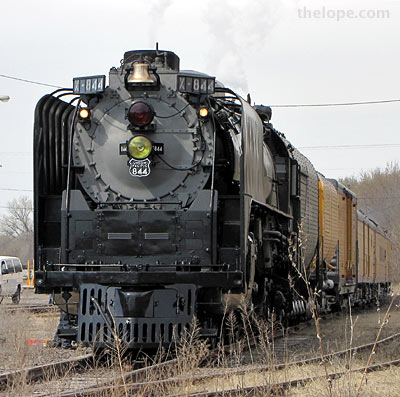 As the crowd thinned, it was easier to get unobstructed photos. 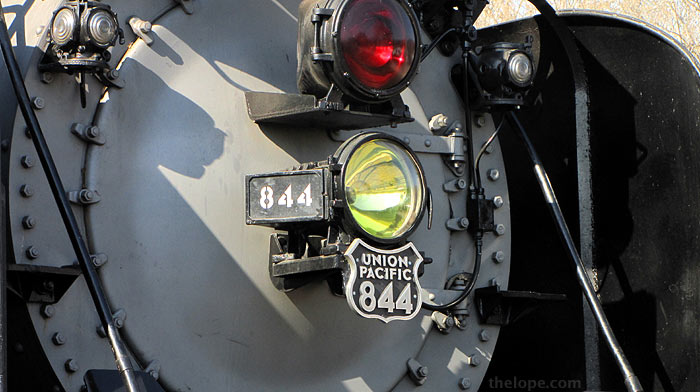 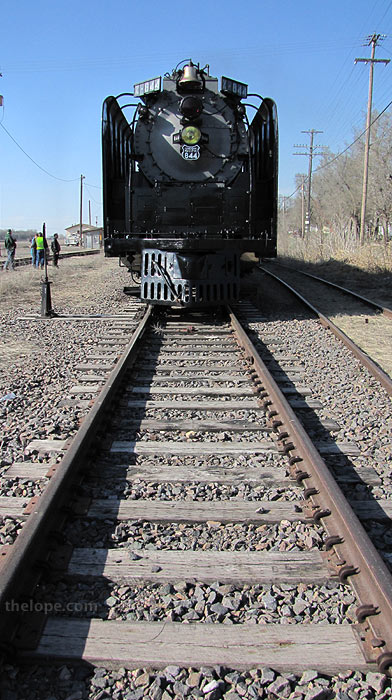 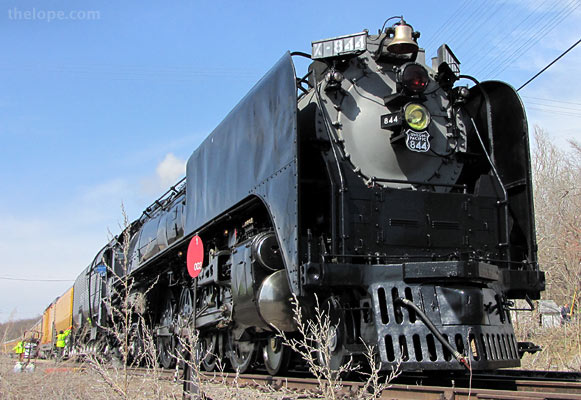 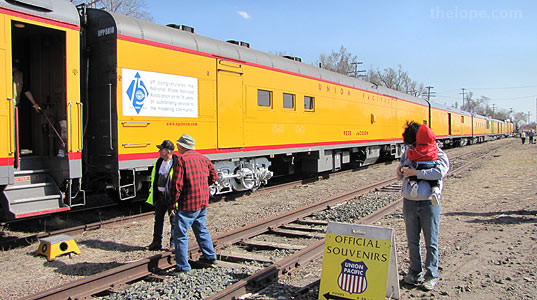 UP doesn't miss a chance to make a few bucks off souvenirs, and people seem to be happy to be able to take something home. 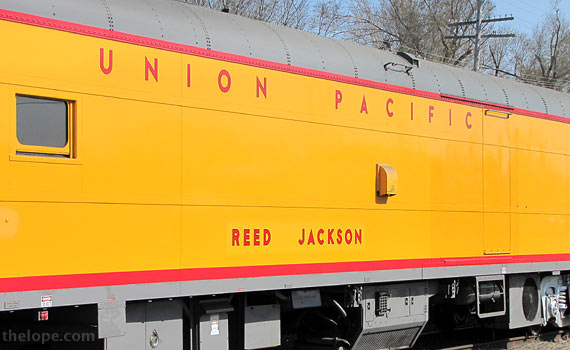 The souvenir car has been renamed the Reed Jackson, after a long-time Union Pacific conductor who passed away last year. 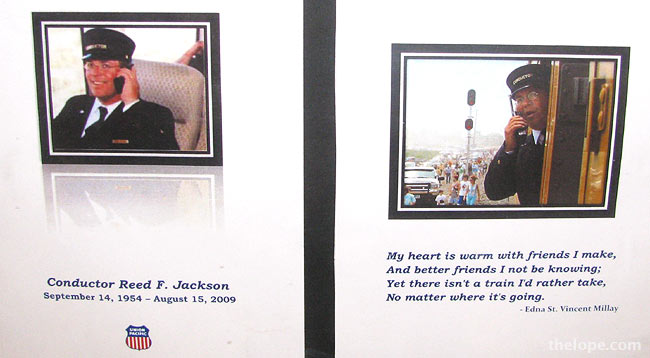 I was pleased to see one of my own photos - the one on the right - used in a memorial to Jackson, whom I'd met in 2006 when I rode the train with writer Patsy Terrell. I knew the photo was being used in a funeral program because a family member wrote me at the time, but I didn't know one of the programs would be posted inside the train. 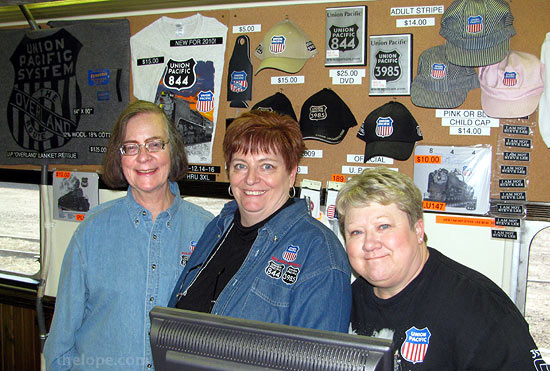 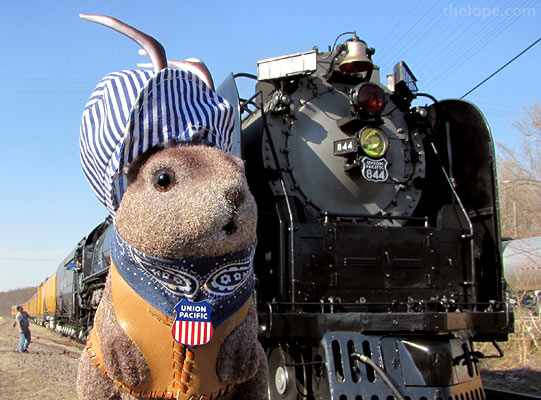 Our visit to the gift shop produced a new UP pin.


I left 844 in Marysville, but as I publish this, it is on display at Kansas City's Union Station and will head south tomorrow, April 6. Again, consult the Union Pacific website to see if it's coming to a track near you. See me gush unabashedly in 844, as the train blasts across Kansas with visits to Salina, Abilene, Herrington and Hutchinson. I really enjoyed taking the starry night time exposures seen here. Take a tour of the executive train in with me in 844 Returns.

I got to live a railfan's dream in 844: Riding the Iron Horse. 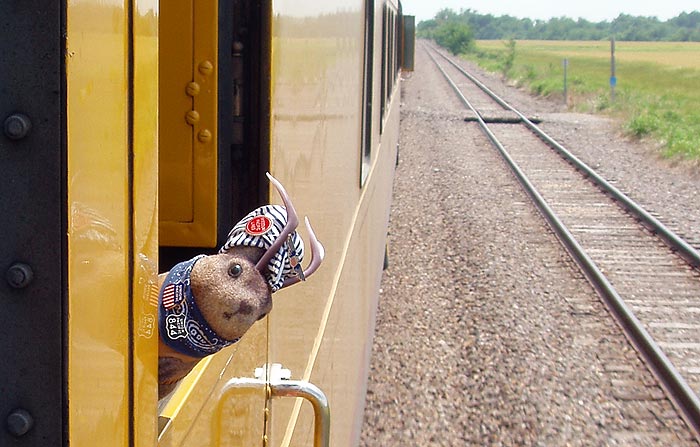 posted by Ace Jackalope at 4:30 PM

Excellent report and videos, almost felt like I was there! & AceJackalope for Prez in 2012 too

I joined UP 844 on easter sunday some miles west of Kansas City and followed south all the way to Hearne, TX one week later.

Probably we met at some locations especially near Parsons, KS. :-)

See my report on steamphone.de:
Trip from Kansas City, MO to Parsons, KS
and my videos an youtube: youtube.com/steamphone (Kansas and Oklahoma are still there, Texas needs some editing.