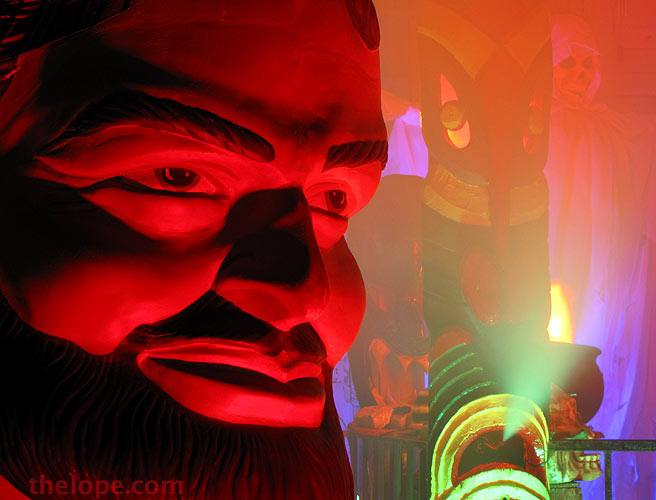 It's been a very busy few days since Halloween, but I had time to work with some pictures. 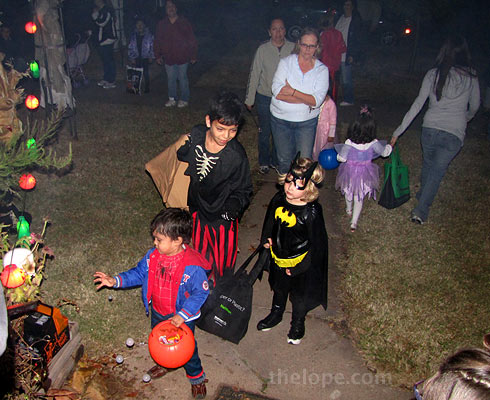 Thank you to all the parents and kiddies that came by our display at Patsy's house this past Halloween Saturday night. About 300 of you moved through over the course of the evening. As you can see by the costumes, we felt well protected by the superhero community. 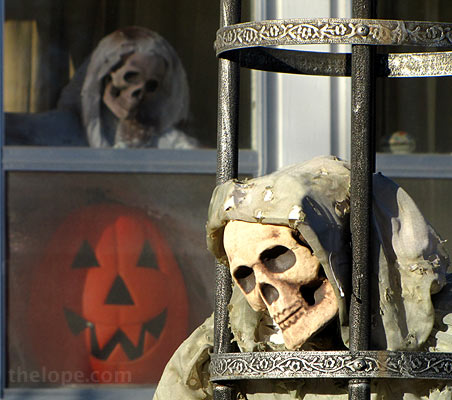 Halloween afternoon, the corpses patiently waited for you from windows and cages in the yard. 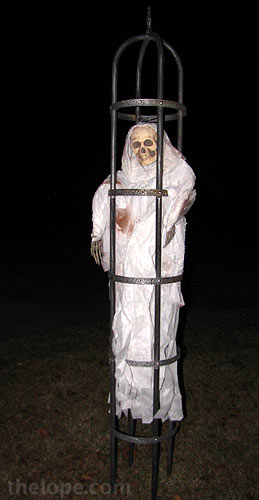 Four corpses hung out in these trellis cages. They were placed so that folks had to walk between at least three of them to approach the porch. That actually spooked some people. Good. Without at least one genuine chill, it wouldn't be Halloween. 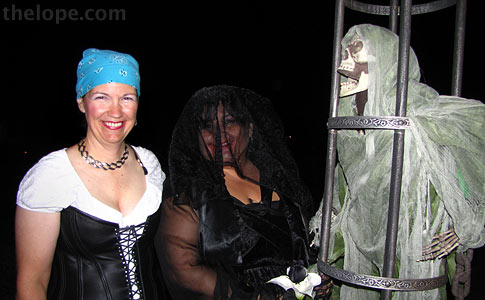 The cages were a last minute addition, loaned to us by assistant corpse wrangler, Sharon the pirate. There she is on the left with Ann, the dead bride. 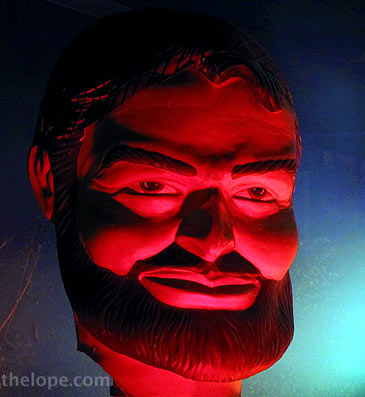 My largest new addition is what being called the "Big Giant Head", for lack of a better name. "Pirate Paul" has also been suggested due to his probable origin as the head of a 1960s Paul Bunyan statue and his recent appearance as a pirate on this website. 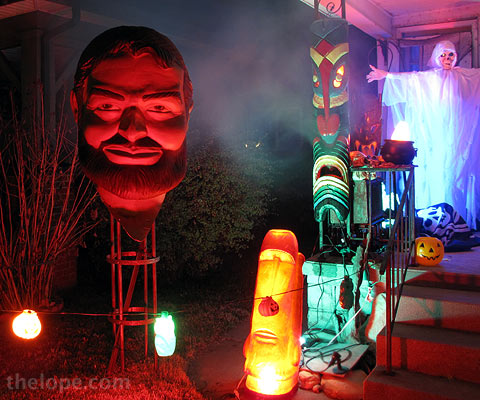 What he is, actually, is the head of what Roadside America has popularized as a "muffler man" - the roadside advertising attention-getters made by International Fiberglass from the early 1960s to about 1974. If Paul still had a body (he was separated from it well before I got him) he'd be about 20 feet tall and way too unwieldy to casually cart around for Halloween. 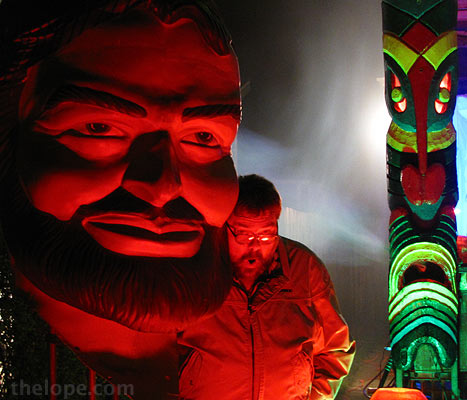 Mark lends a sense of scale. 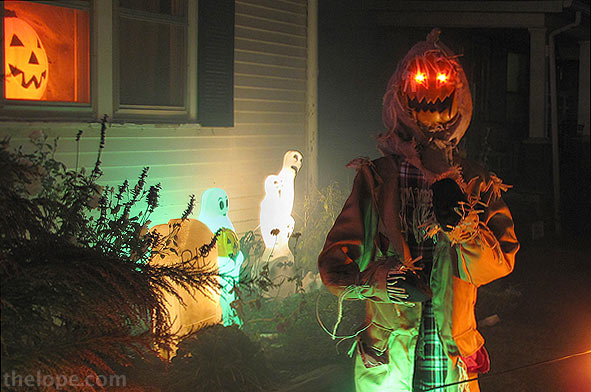 Another addition was this collapsible 5' scarecrow that I bought two years ago on clearance and forgot about 'til this year. 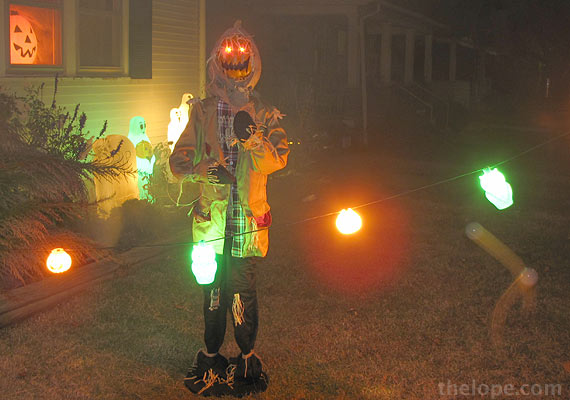 But what's this? There are two floating orbs to the right. Did I inadvertently capture ghosts with the camera?

Is this cat being pestered by disembodied spirits of mice and birds? (like a cat wouldn't kill them all over again just for kicks) 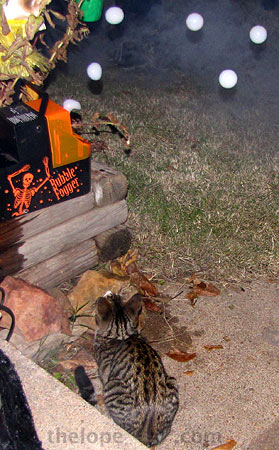 Nope, the cat tracked down the bubble fogger I placed to the side of the porch. 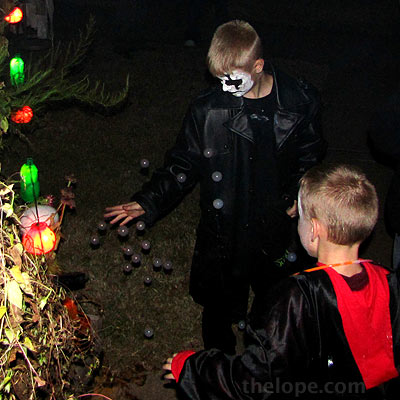 It was actually the bubble fogger that interested kids the most. 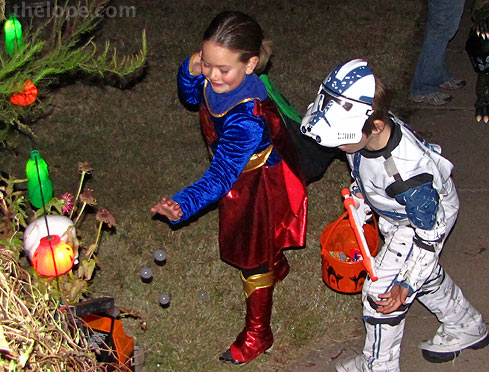 Supergirl fends off a bubble as a Clone Trooper looks on. 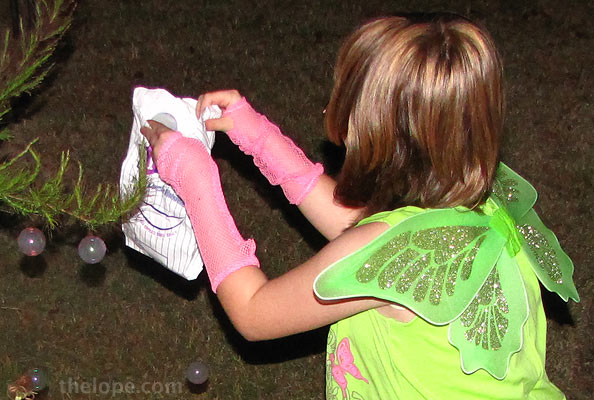 A green fairy caught fog bubbles in her sack until it was filled with smoke. 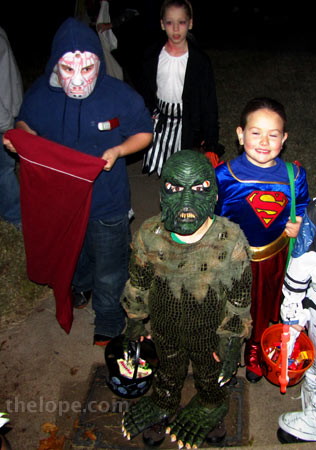 I think the boy in front is supposed to be the Creature from the Black Lagoon. This gladdened me as the creature is my favorite 1950s movie monster. I don't think of kids as even knowing about him. 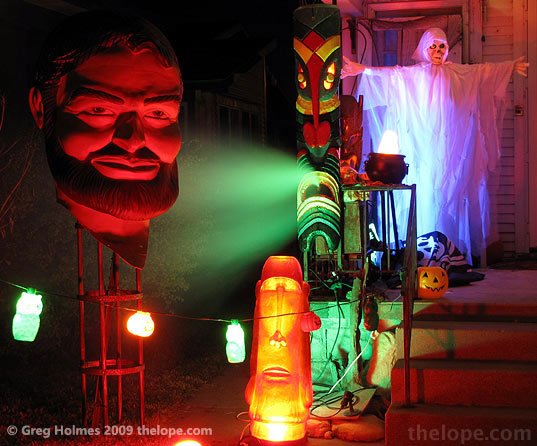 We hope you had a happy and safe Halloween. 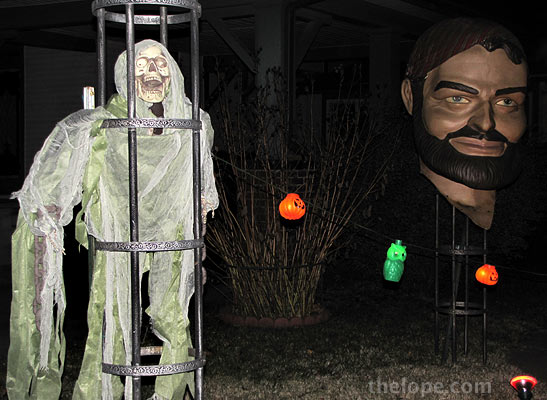 And we plan to see you next year, of corpse.

posted by Ace Jackalope at 3:21 AM

Glad to see the bubble fogger. I put one out, too, and it was the hit at our house as well.