Of course, the Kansas State Fair can be a place of learning, a place of edification, a place of...oh heck, you wanted free stuff and so did I. He's some of the best of it. No, they weren't giving away giant fiberglass cows. Turkey Hill gave away little cups of ice cream - good stuff, too. Of course, what I really liked about this was that for ten days Hutchinson had a fiberglass giant. We're unfortunately short on those here. An informed freebie shopper would enter at the the gate north of the 4-H encampment building and grab a U. S. Cellular backpack first. For the past two years they had these. I've actually found them useful on road trips; they don't look as threatening to museum security folks as a normal backpack does.

The Kansas State Union Label Council had a few goodies. 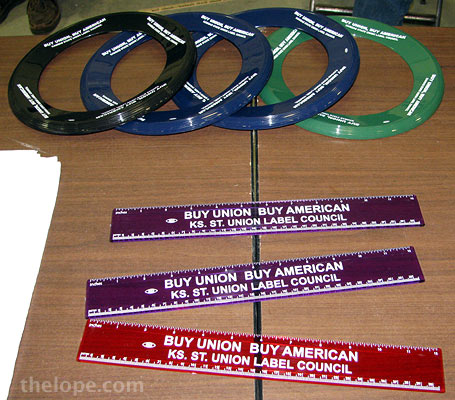 In addition to being the only place I saw with the ubiquitous pill cases, they had rulers and throwing disks. Another time I picked up a small fabric draw-string sack, such as one might use to contain small accessories.

By far the most potentially valuable freebie was a free blood screening for prostate cancer offered by the Red Cross. I remember the days when Bob Dole would stand in the aisle outside their booth, holding his pencil and offering "would you like a free prostate exam, sir?"

This ended before his 1996 bid for the presidency. I imagine some astute handler told him the line was too ready-made for Saturday Night Live parody. 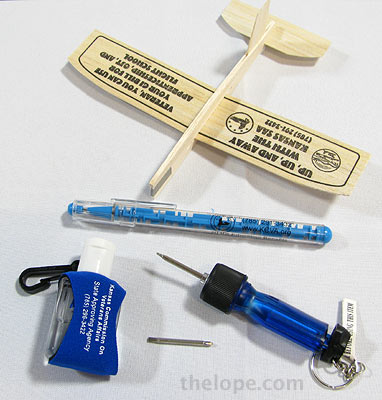 The Department of Veterans Affairs in the Meadowlark Building had lots of swag; this is only some of it - balsa wood gliders, b-b puzzle pens, hand sanitizers in little carriers (very topical right now) and a combo flashlight/screwdriver set so you can see better in the dark when you're...working with screws. Also in the Meadowlark, Newman College had magnetic clips and carabiners. 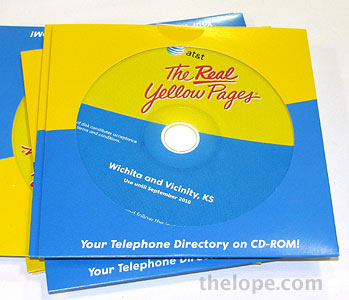 I used to leave the fairgrounds with heavy and bulky Wichita Yellow Pages, which I actually used quite a bit. These days I pretty much look up everything on line, but the Yellow Pages on DVD isn't a bad thing to have. 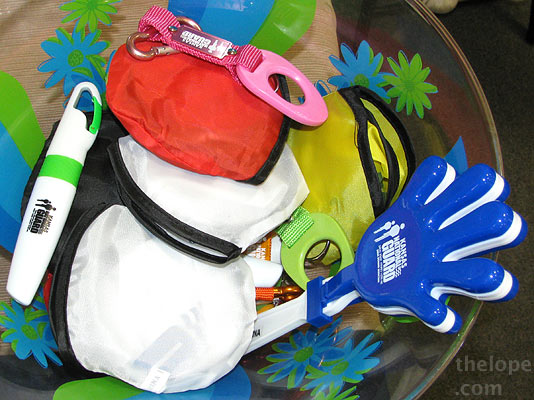 The National Guard had backpacks in its drug awareness booth, but gave all of them away by mid-week. They did have a good supply of other goodies, though, for answering simple questions about how drugs impair people. 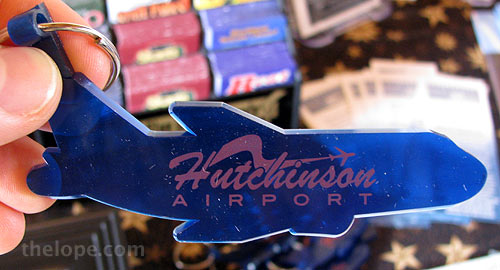 If you were just visiting and wanted a souvenir that said "Hutchinson", the free key chains in the Hutchinson information area would suffice.

Freebies were scarce in the Eisenhower Building; KDOT had maps but not the usual ice scrapers. The best swag, by far, were the prizes given for taking a short boating safety quiz. 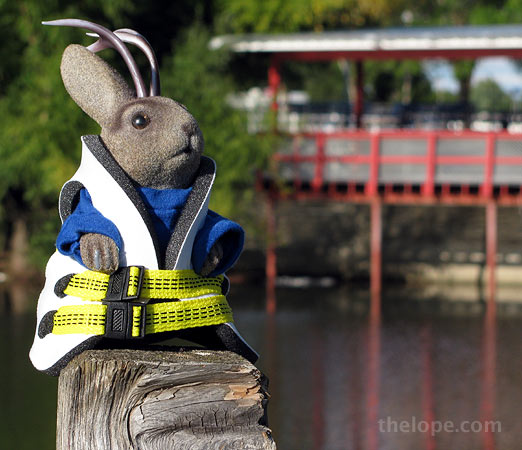 The boating safety booth also gave away what many thought were can cozies as prizes. Obviously, these were actually specialized life jackets.