The Lope: Computer - Off

Majel Barrett-Roddenberry had several careers in the United Federation of Planets, the most influential of which was probably behind the scenes as wife Star Trek Creator, the late Gene Roddenberry.

Back when she was Majel Barrett, she played Nurse Christine Chapel in the original Star Trek series - a character almost defined by her unrequited love of Mr Spock. 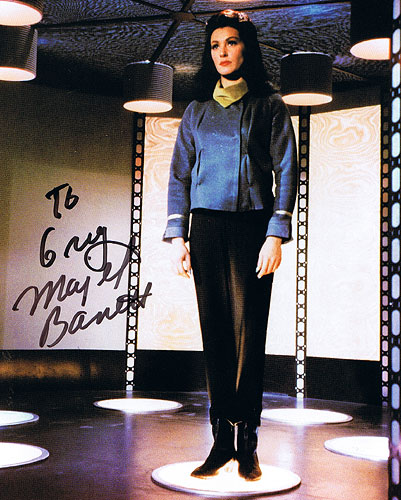 She didn't start out that sadly stereotyped though; her initial role was as the logical and headstrong first officer of Captain Pike's Enterprise in the first Star Trek Pilot, "The Cage." Legend goes that the TV execs of the time were nervous about a woman in so commanding a role, so Mr. Spock gained a promotion, stopped smiling as he's done in "The Cage" and Majel traded Number One's cold edge for Christine Chapel's puppy dog eyes. 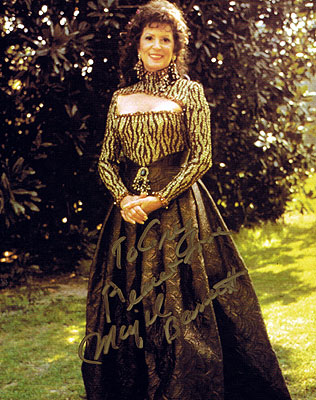 By the time Star Trek - The Next Generation came along, TV had grown up and Majel played the empathic and even more headstrong mother of the Enterprise' counselor and ambassador to Betazed, Lwaxana Troi. It was a part she said barely required acting.

As Lwaxana, she also had a fixation on a man - Captain Jean-Luc Picard. There was nothing pathetic about it, however; she was a just a woman who knew what she wanted and went for it.

More entrenched in our collective memory, perhaps, is her role as the voice of the computer on Star Trek and Star Trek - The Next Generation. She has also completed voice work as the computer in J.J. Abrams' reboot of Star Trek, due out next May.

At the Trek Expo convention in 2002, I asked her if she'd ever considered marketing an answering machine that used her voice. She told me that she didn't seek business opportunities of that nature but that if a company came to her with that proposition, she'd listen. She paused for a moment like a woman tallying her potential profits and suggested I write some answering machine companies and get the ball rolling on that. I didn't want it that much.

I just read on Wikipedia that she also provided her voice to the Union Pacific railroad for track-side defect detector devices. I'll have to check into that and see if I can record one sometime.

Majel Barret-Roddenberry died in her sleep yesterday at the age of 76. Answering machines have gone the way of the old Enterprise now, but she'd sure would have sounded nice on a modern GPS.