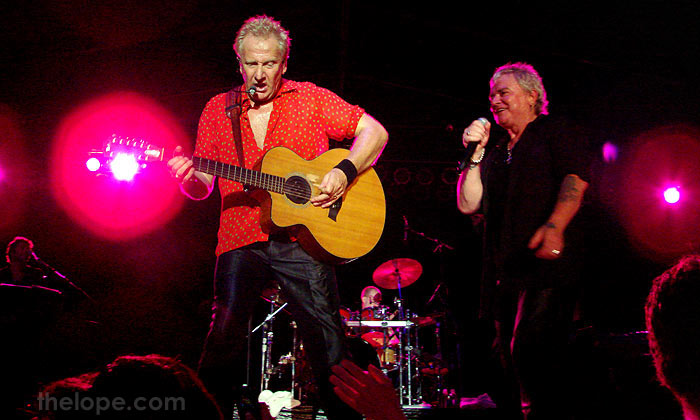 Graham Russell and Russell Hitchcock, the duo that forms the core of Air Supply, played in Wichita this past Saturday night. 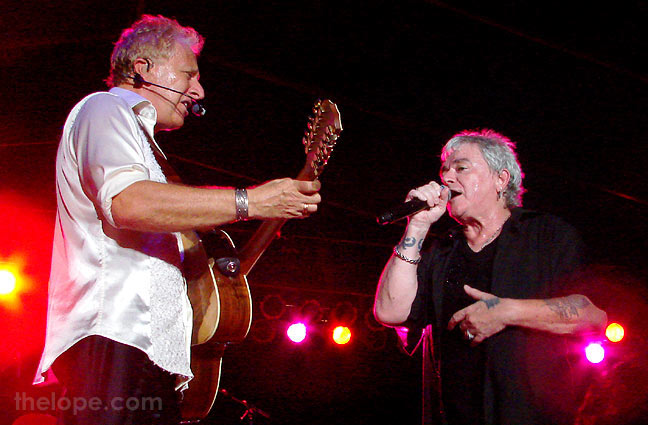 Yeah. Air Supply, a soft rock ballad duo from the 80s - not normally my thing. I've always been more of a 70s progressive rock and current alternative guy. When he learned I'd gone to the concert, my brother even called me and said "I know it was free, but...Dude?...Air Supply?" 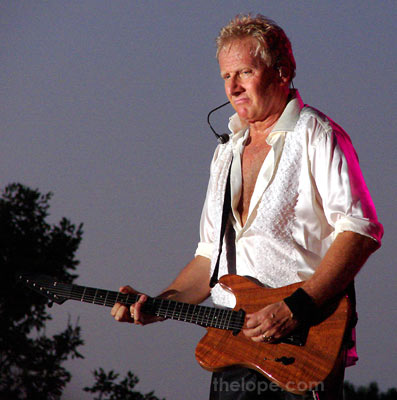 The last time I thought of Air Supply by name is when Stewie on Family Guy did a systems check in a vehicle and says "air supply?", whereupon his computer plays "Lost in Love." 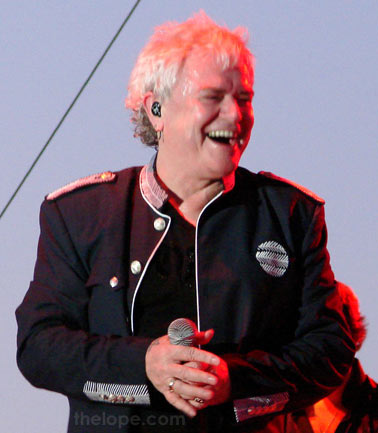 But I gotta admit, I had a blast. The group's musicianship was tight, yet their informality engaged the crowd. And those songs - I guess it's no surprise that a sound as ubiquitous as Air Supply was in the 1980s can run beneath the waves of your mind like a subliminal submarine which needs only a reminder to surface. It's four days later, and I'm still running "Lost in Love" in my head. So far, it's not annoying.


The deal was that my friend Sandi had two tickets to the show - free, courtesy of it being a kick-off event for the Wichita Open golf tournament at Crestview Country Club. The concert itself is listed as being sponsored by Cox Cable.

Sandi couldn't go because she unexpectedly had her son that weekend and she deemed it inhumane to subject the lad to 1980s soft rock, so she offered the tickets to me and forked them over during a visit to the Anchor Inn, just just outside the Rudy Love concert, Friday night.

My friend Patsy and I had already decided to go to Wichita Saturday to do some thrift store shopping. I tried to give the tickets away a couple times, knowing Patsy wasn't that interested. We finished at 8PM, across town from where the concert was already starting. "What the heck? Let's go over there", we said.

Concert goers were supposed to meet at the parking lot and be bussed over to the country club. When we arrived at the lot, well after 8, a security guard told us the last bus had left and that we couldn't park near the country club. 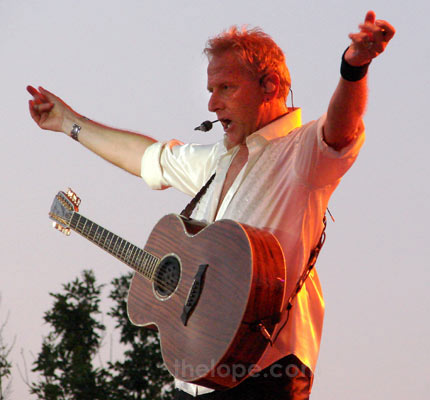 Of course, how much fun do you have in life if you concede defeat so easily? So, we headed over to the country club where Patsy, in her best affected Southern girl accent, asked if we couldn't park there. (A Southern Girl is an asset to most any quest.) He graciously allowed us to look for a spot, and we found a peachy one.

We lead charmed existences, and we know it. 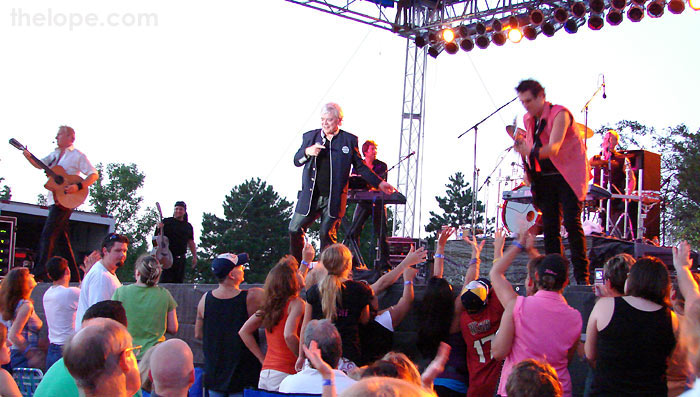 Patsy settled into her camping chair at a nice spot in the back. I headed toward the stage and quickly shot one general photo in case I was stopped on the way and told cameras were not allowed. 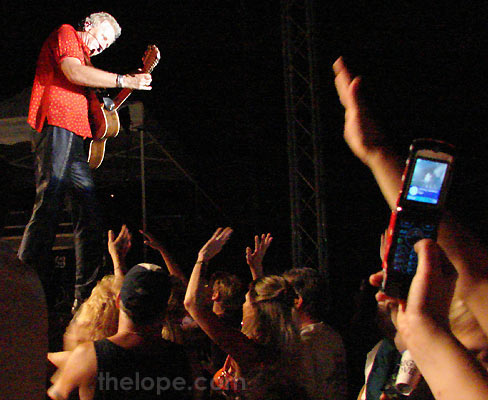 But it turns out cameras were allowed - cameras, cell phone cameras...I even saw a few camcorders. Holy crap. Do you know the last time I got a camera into an event like this without pulling strings? I don't even remember. 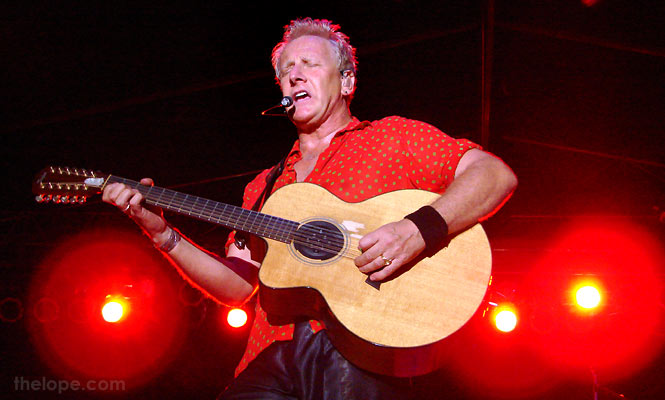 And because I have pictures, I wrote this post, which'll be picked up by Google and possibly help sell tickets to Air Supply shows where you actually have to buy admission. Not to mention the scads of other people who had fun taking photos and showing them to their friends. Good PR, that.

Remember that Jon Anderson and Rick Wakeman concert I blogged from England? No? Oops, that venue stopped me from taking photos so, this being a photo blog, I blew it off and never wrote about the show. See how that works? 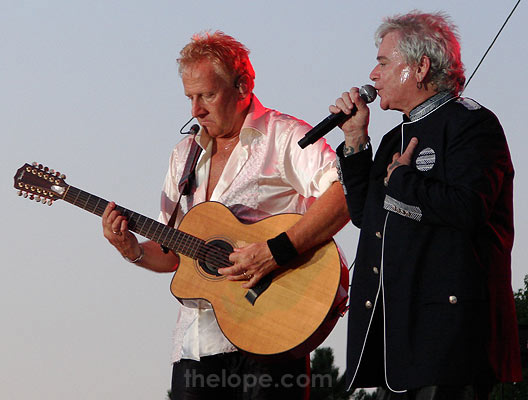 It was hot, btw - in the upper 90s when the show started at 8PM. You can see Hitchcock sweating. I never understand the tendency of musicians to wear jackets and leather pants when it's so frickin' hot. They did change costumes once during the show. 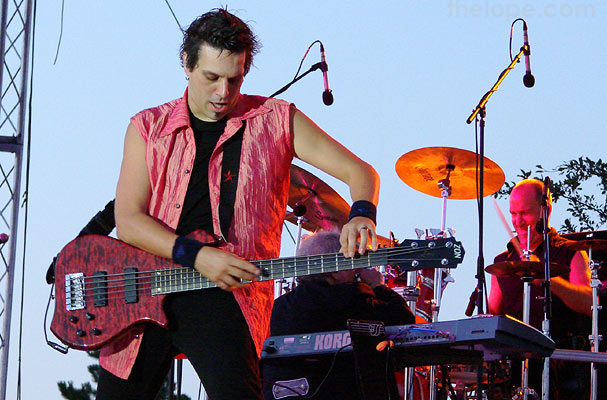 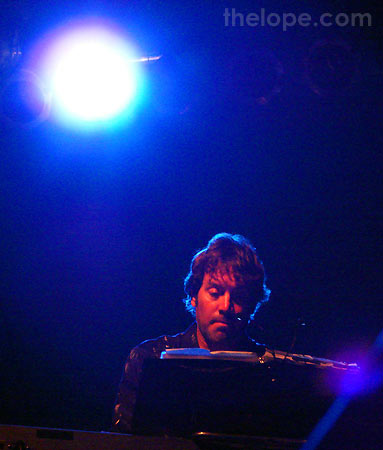 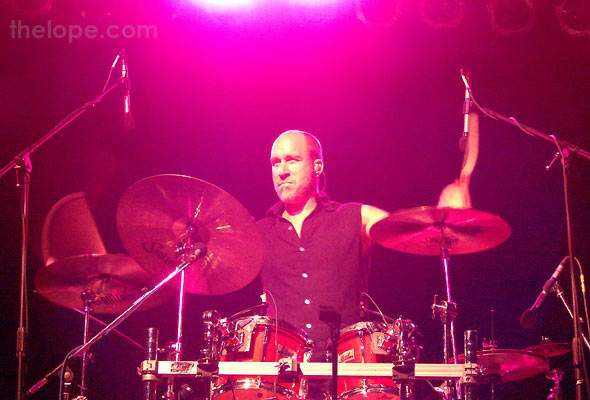 Mike Zerbe, formerly of the Coates Twins, has played drums for Air Supply since 2003. Zerbe was raised in Glendale, Arizona, and now lives in Las Vegas, Nevada, where his wife, Rashell, is a police officer. 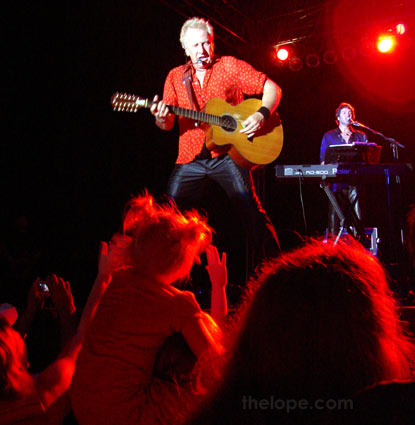 This was an all-ages event. 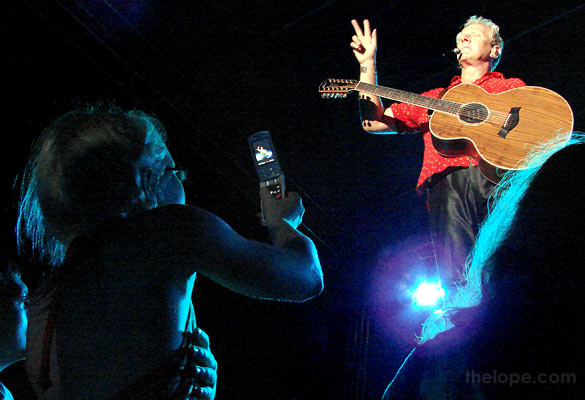 This little girl was in an adult's shoulders for a better shooting position. It occurs to me that for this girl's entire life, phones have been able to take pictures. 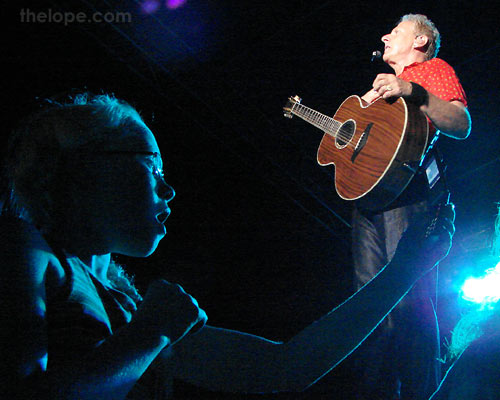 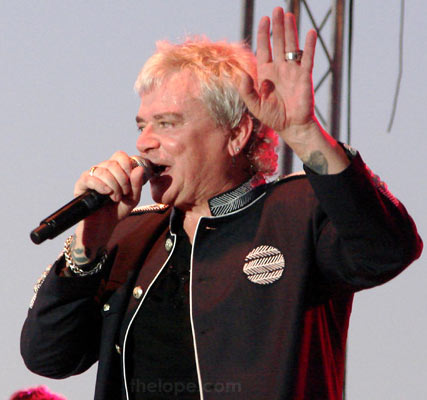 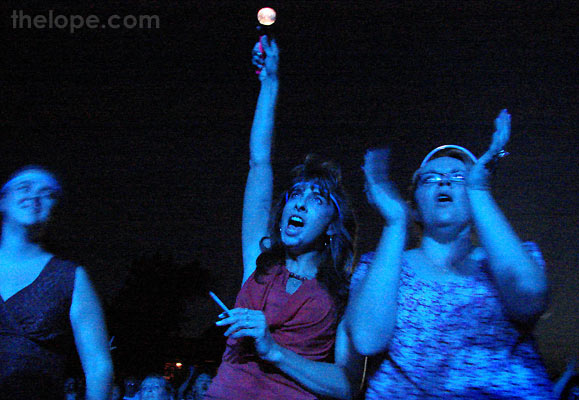 I was expecting and older, mellower crowd. Many women near the stage flashed, sometimes small groups of them would do this in a pattern like the wave. At one point, there were bare breasties behind me and to the right of me. Of course, with my digital camera's shutter lag, I didn't get any R-rated material, not that I could have shown it here anyway. 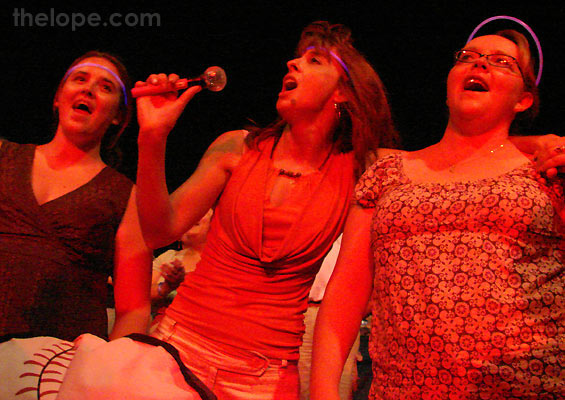 I did point the camera at a women just after she flashed. She smiled politely and said "Sorry; you're not with the band." 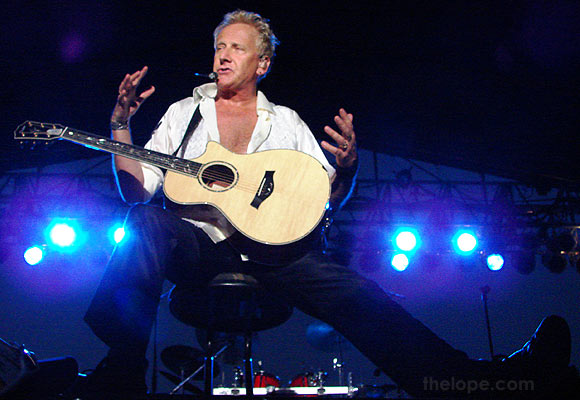 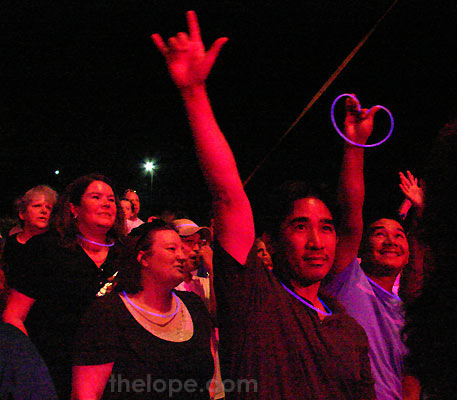 Women weren't the only gender sending messages to the stage. I didn't notice until I was editing these that the guy on the right had made a heart out of his glow necklace. 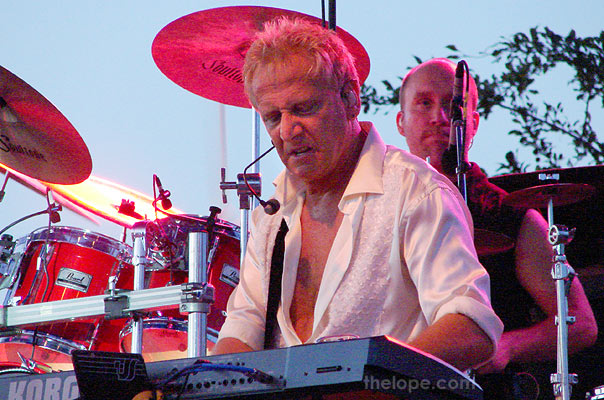 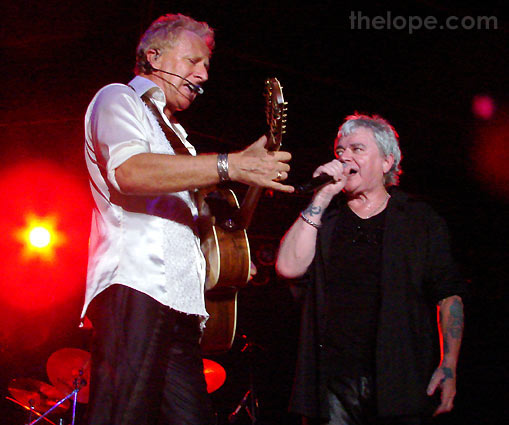 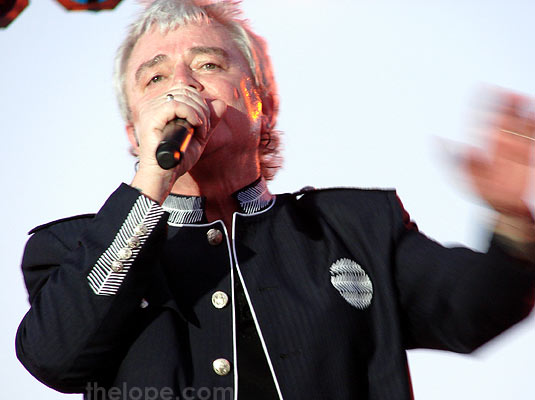 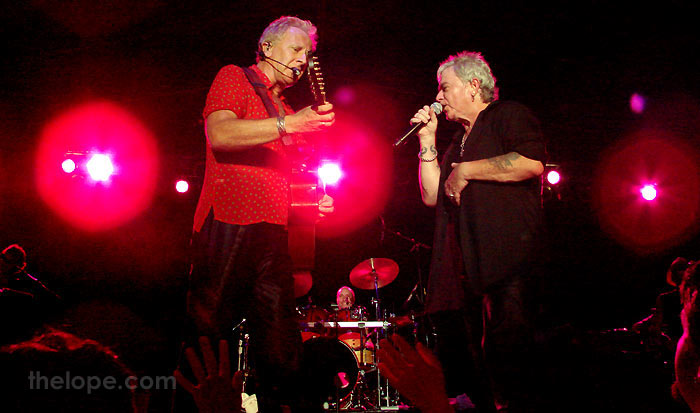 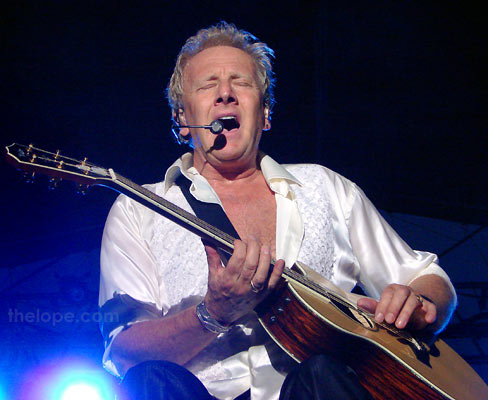 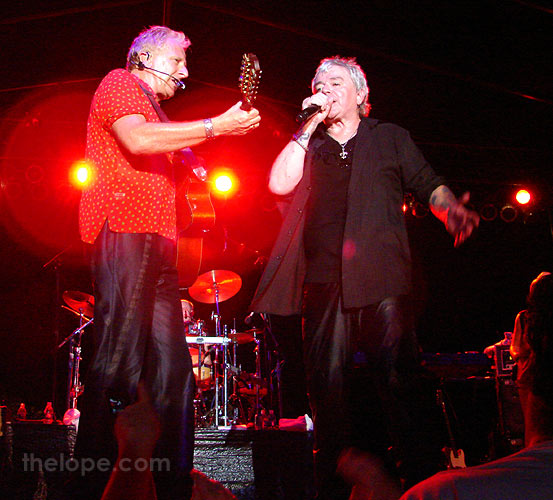 And now, a video of the end of the encore song, which was "I'm All Out of Love" as a sing-a-long. I wouldn't post it, except it's pretty much about the audience at this point. You can hear a woman yelling at the stage, "We want to party with you, after..." 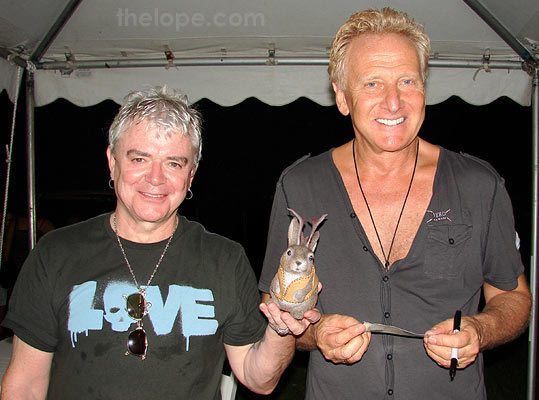 After the show, Hitchcock and Russell signed autographs and posed with people (and jackalopes). I've never made a music-oriented outfit for Ace, which is a lapse on my part as his clothier.

Back to that part about leading a charmed existence that leads to unexpected fun - You know how it happens? Friends. I had one that offered me tickets, and another that wanted to go to Wichita. Lone explorations are satisfying, but some kinds of fun don't happen in a vacuum. A healthy social network facilitates good fortune.

HAHA! Fun times had by all it looks like! Very cool!

how odd! they played in Israel a couple of months ago and there was quite a buzz around it. Well, there's a buzz around most bands that visit from abroad. Ace sure needs a rock outfit. What if he finds himself in Graceland?