If the futuristic architecture of the mid-20th century has a singular icon, it's the Theme Building at LAX (Los Angeles International Airport). 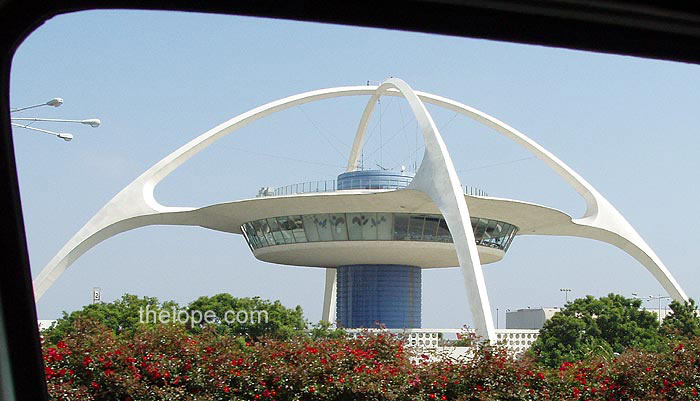 I'd seen the Theme Building online and in books, but nothing could prepare me for the view from my taxi window that day in August of 2005. If you're a fan of "Googie" architecture, a futuristic style so prevalent in the 1950's and 60's, this place is a must-see.

Construction of the Theme Building, part of the "Los Angeles Jet Age Terminal" project, began in April of 1960 and was completed in August of 1961. The building, with its flying saucer suspended on parabolic arches that soar 135 feet high, was dedicated in 1962. Long before the Los Angeles City Council designated the building a Cultural-Historical Monument in 1992, it had already become iconic of the future we were supposed to have.

According to the University of Southern California, architect William Pereira's brother, Hal, was art director of the 1954 film, "War of the Worlds". The Martian war machines would look very natural here. 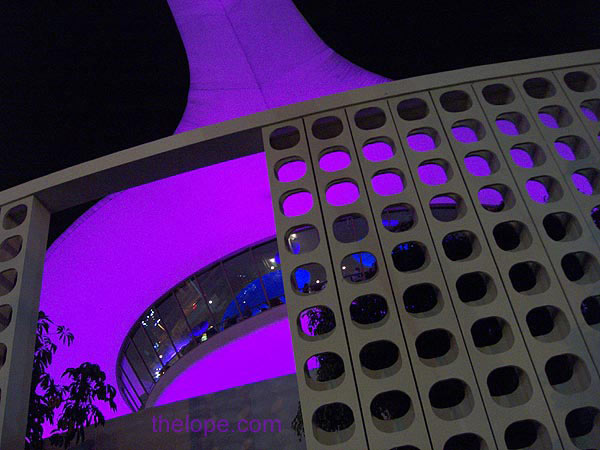 From 1961 until 1996 an international cuisine restaurant called the "Theme Room" operated in the building; I've seen no photographs of its decor, but have read accounts which imply that it was nothing too out of the ordinary.

In 1996, the restaurant contract changed hands and Walt Disney Imagineering was hired to give the place a make-over. The result was, inside and out, a beautiful retro treatment which enhanced the already masterpiece-status googie building. On January 31, 1997, work was completed on the "Encounter Restaurant and Bar"; the future had been rediscovered, as it were. 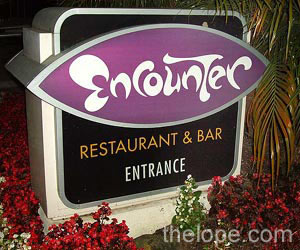 I ran across a 2001 interview with Eddie Sotto the head of Disney team responsible for the renovation. The interview was conducted by Marc Borrelli of the Disney fan website, laughingplace.com.

Sotto stated that, before the renovation, the Theme Building needed "color and a heartbeat". Lighting designer Michael Valentino added a simple but effective light show. Imagine having a Disney-sized budget and a canvas like the huge white underside of the Theme Building. It can make those of us who are into holiday lighting drool. 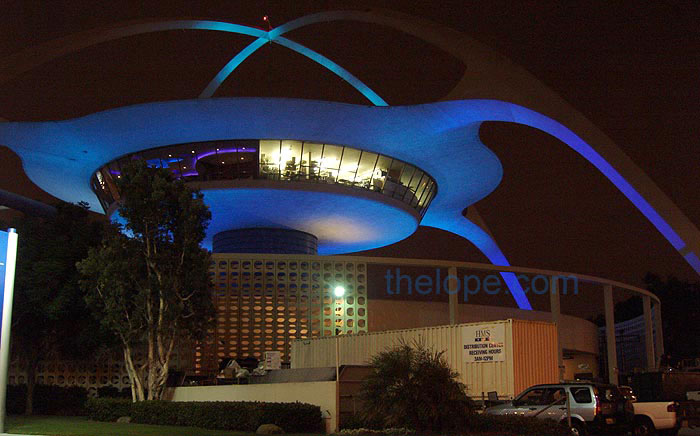 When I was there on August 13 of 2005, the exterior slowly morphed through hues of purple, blue, green and orange. 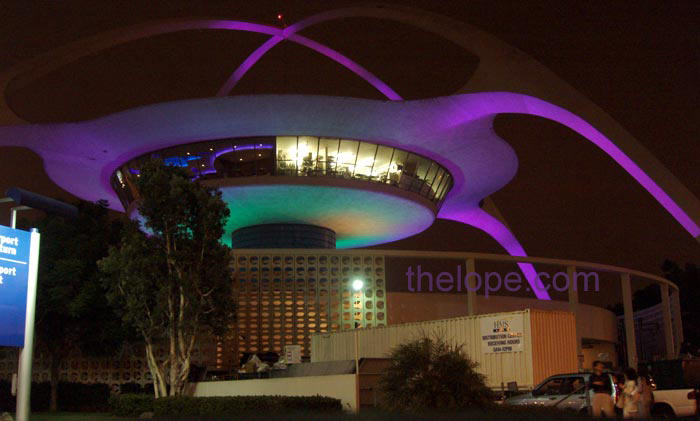 Transition from the outside world into any "differently themed" establishment is a subtle but important step in the customer's experience. In a tiki bar, it can be a walk from city asphalt through dense foliage to a tropical paradise. In the case of the Encounter Lounge, it's a ride in a shiny elevator up to a space port. How does this transition work? Music, mostly. 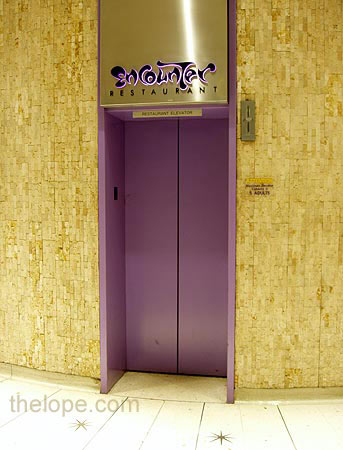 Sotto: "The biggest issue was how to get someone out of the negative, noise polluted world of an international airport and prepare them for a wild, "Barbarella-gant" evening of Martinis! We used a soundbyte in the elevator to transition you from the world you are in to the one we have staged. The elevator drops you off in the bar, so the moody Theremin music sets the right tone. Most guests inside are surprised by weird elevator music and smile at each other, then when the doors open to lava lamps and the wild room, they "get it" and forget about the airport till much later." 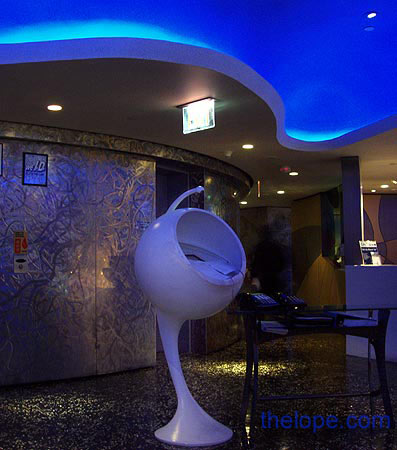 I've got to say the effect works; I didn't know about the music or the decor, but when the swanky retro music started, I hoped I was in for something googie-riffic; I wasn't disappointed. The hostess stand above is the first thing you see when you step off the elevator; it's an indication of things to come. 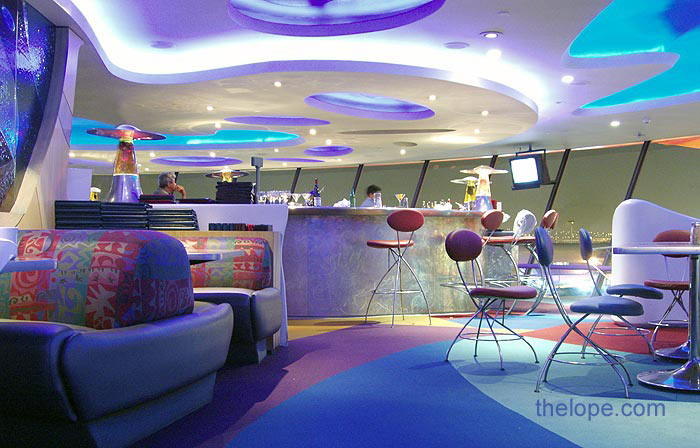 Inside, the surroundings do overwhelm. There's a 360-degree view here, but it does not do the place justice.

Sotto: " We wanted the inside to feel like an "intergalactic in flight" lounge. The kinda place George Jetson, James Bond and Barbarella could drink together." 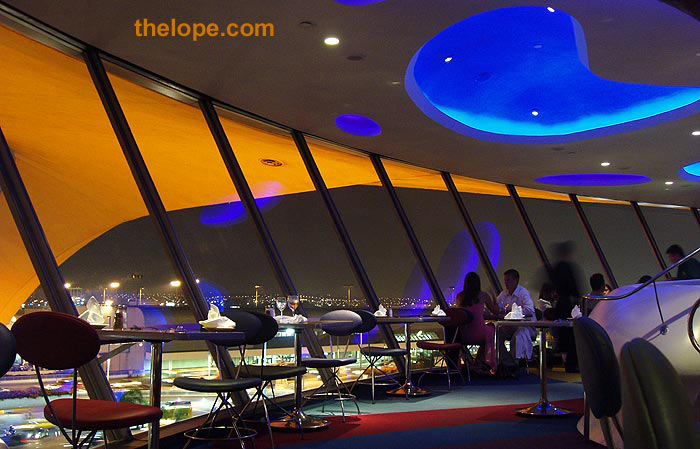 The color changes in the pylons are quite visible inside. 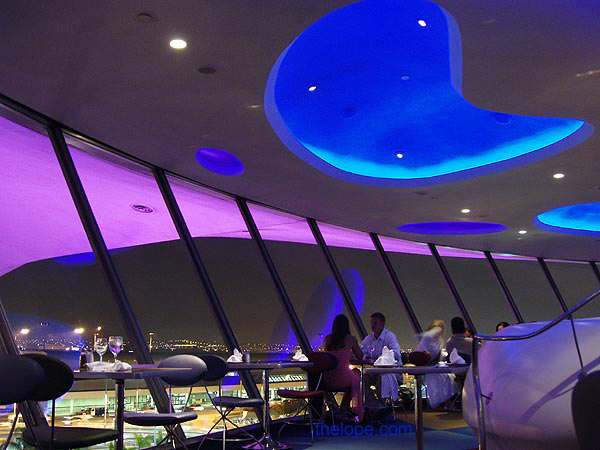 The "moonrock" textured walls were base-coated in metallic paints and react to light with the illusion of a faint glow. Incidentally, the Austin Powers wrap party was held in the Encounter. Very fitting, huh? 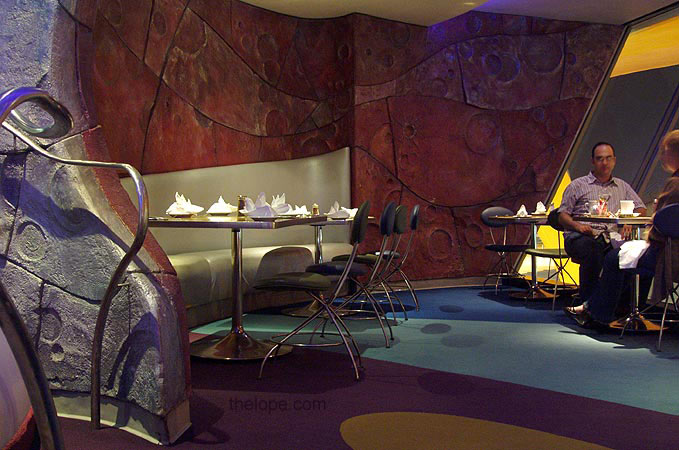 The bar tops are dichroic glass and reflect slightly different colors depending on the lighting and viewing angles.

The decor of the bar was intended to evoke the swinging 1960's; Sotto said "It is the last glimpse of a culture before people started shooting presidents. You go there to drink the Martinis without fear. There was less of it then. Especially at the bar."

Sotto: "The inspiration of the whole thing is to recall a more optimistic time when jet travel was new and fresh and a "jet set" culture grew up around it. The skies were full of playboys, spies and elegant Martini sipping travelers. I used to watch those Bond films and the Peter Sellers movies with all those cool people at these awesome parties with motorized floors and go-go dancing and wish I could go to one." 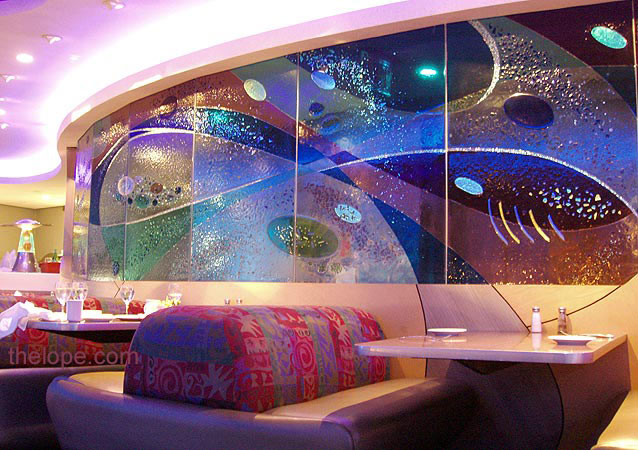 Of collaborating interior designer Ellen Guevara, Sotto remarked: "She brought me some samples of pearlescent paints and that kicked off this idea of designing the space so the time of day would change the feel and color of the room as time passed. The "cloud" shaped booths reflected color a certain way..." 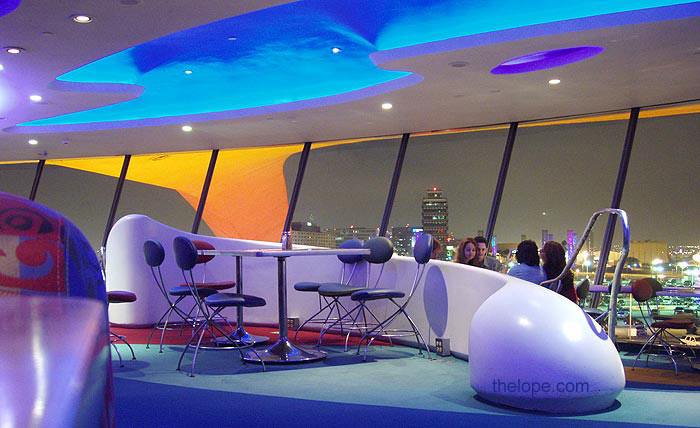 The chairs are from designer Lisa Krohn's "Meow Collection." 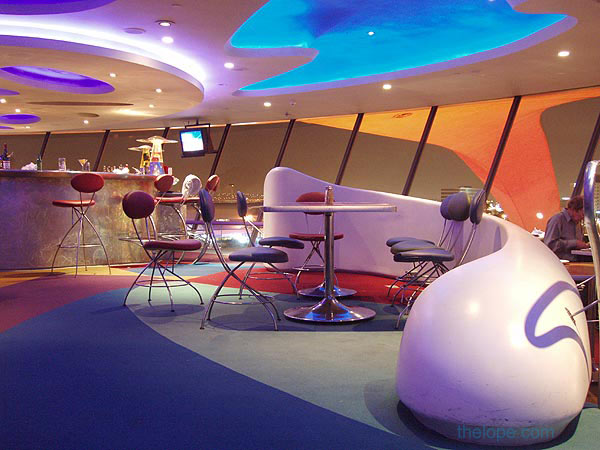 Ace Jackalope relaxes near one of the Encounter's several huge lava lamps. Some are red and others are blue-green; all have flying saucer-like tops and I'm pretty sure they use the same container that was found in the large lava lamps sold by Target stores a couple years ago.
Sotto: "the lava lamps work for dad as something he recalls, but they are redesigned to look modern so the younger audience will see them as new and cool, and not Hippie-esque." 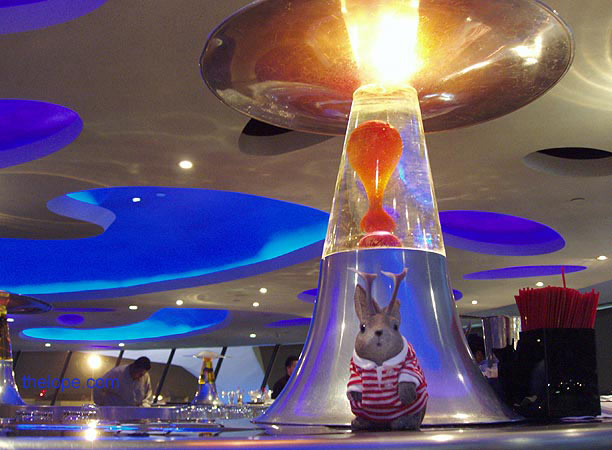 You knew that somewhere on the world wide web there had to be a site devoted to the history of lava lamps, didn't you? well, you were right, and it's very entertaining. Here's its page on the Encounter lava lamps. 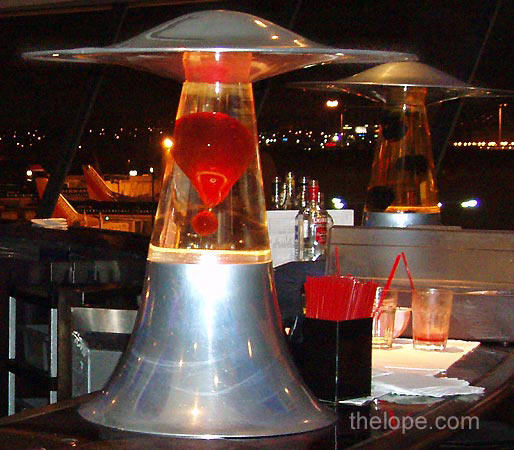 The six-hour soundtrack that plays in Encounter is designed to appeal to those who remember the 1960's with music by period artists like Mancini, Esquivel, and Tony Hatch, as well as more cutting edge stuff from neolounge bands like Ursula 1000, Nicola Conte, and Fantastic Plastic Machine.

It contains such oddities as "Goldfinger" played as a mambo, a Moog Muzak version of Soundgarden's "Black Hole Sun", "Bond Street" (the theme from "Casino Royale") by Les 5-4-3-2-1, "Air" by Moon Safari as well as music from Gerry Anderson's Thunderbirds and Pan Am commercials. 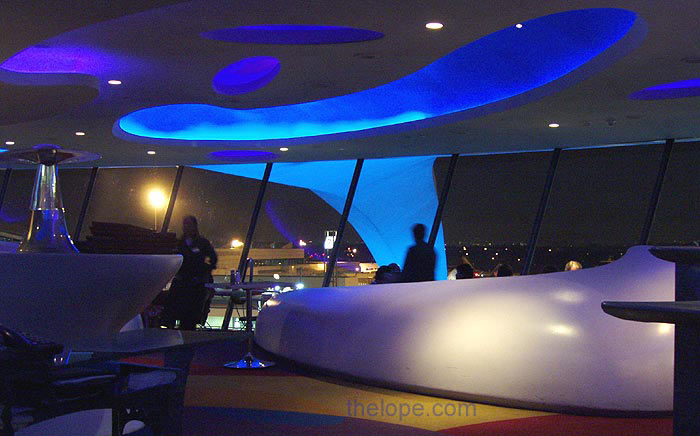 Notice that I didn't mention the food or drink; I didn't have any. Surprisingly to me, the restaurant closes at 9:30PM, at the latest, and the bar, at ten. I would have thought LA, especially at the airport, did not sleep. We made it in just under the wire at 9:53. I'm sorry I missed looking at the beer taps; I've read they are illuminated and make a sci-fi sound when pouring.

In 1996, a new 277 foot tall air traffic control tower was built near the Theme Building. It looks pretty cool, too. 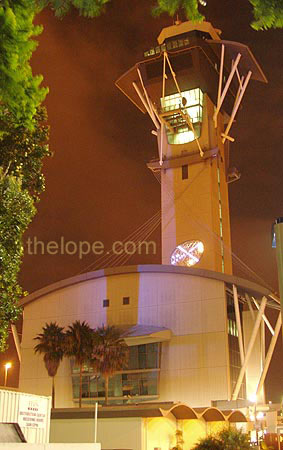 In a beautiful case of life imitating art imitating life, the architecture shown in The 1960's cartoon, "The Jetsons" was based on the Theme Building's exterior. Decades later, the interior of the Theme Building was remodeled to give it a "Jetsons" feel. 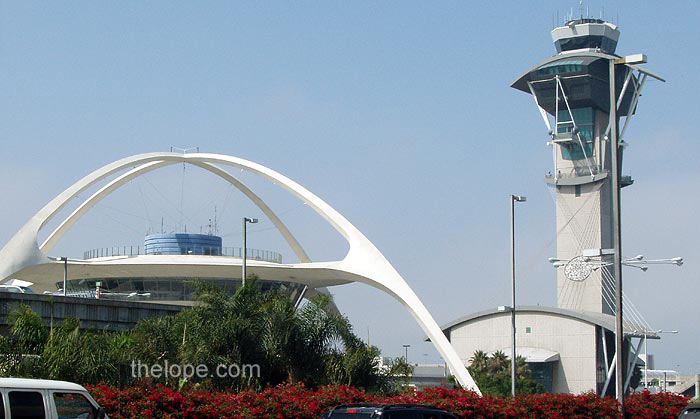 There's an observation deck atop the saucer, by the way, but it's been closed since late 2001 because of security concerns.

Last Monday's Zippy the Pinhead cartoon strip dealt with Zippy's infatuation with Googie at the Encounter. The restaurant's lettering and architecture made him tipsy.

As I left LA, the last picture I took on the ground was of the Theme Building as my plane taxied down the runway. Abrasions, condensation and grunge on the plastic inner window could not dim the future that was supposed to be.

Excerpts from laughingplace.com are used by permission, including the title of this post, which is a quote from Borelli.

Updates: The Encounter was closed in early March of 2007 due to stucco material falling from upper arches. At the time of this update, May 30, 2007, it was still closed. Read more in the L.A. Times.

Also, I've added "thelope.com" to the photos because parts of this post - and sometimes all of it - have been hyperlinked without attribution a few times. This has also taxed my bandwidth limit. I welcome links to any of my posts; you don't even have to ask permission for that. It's also OK with me if you hyperlink to a photo or two, or save one to your own server and re-post it, but only with linkable attribution, please.

Fantastic post and beautiful photos! I love the Encounter and always make a point of stopping there when I fly in/out of LAX.

Nice photos. I've only been to the Encounter during the day. It looks like night time is the right time.

Hallucinating and amazing and cool!
thanks!
it is so unreal in a way, and tempting like wonder land :)

The Encounter appears to be open! http://www.encounterlax.com/

Thanks for the great story and photos.

Thanks for an entertaining and informative post. I arrived here by googling "Hall of Justice" (my kids were watching Superfriends)and was surprised to find that there's a real building in Cinncinati.

And, as an airline pilot- I've been flying into LAX for over twenty years, always saying "someday I'm gonna eat in that restaurant" without really knowing what was in the place. Nice job.

p.s. I fly over your town quite often on my regular YYZ-LAX route... Someday I'll have to see the area from the ground. ;-)

So glad you never took this down because I just found it. These are by far the best photos of the Theme Building and Encounter I have seen. They perfectly capture the original vision.

There's an entire episode of Here's Lucy that this restaurant and building is featured in, if you'd like to see what the original Theme Room looked like before it became The Encounter. At the time that I'm writing this, it's viewable on Hulu, or you can find it on the Season 1 DVD. The episode is called "Lucy and the Great Airport Chase." And of course, true to everything that Lucille Ball ever lent her talents to, it is a fantastic episode and very fun to watch! Definitely an important part of the history of this building.

Thank you for the fabulous website! We went to the Encounter last July (2012) and just loved it—good food, amazing architecture, cool music—even the bathrooms are fun. It was the highlight of our trip to LA. Thank you for putting all this together.