This post is a combination of several sequential posts from my previous blog. They occurred during a May, 2005 trip from Joplin, MO to Needles, CA with side-trips to Phoenix, AZ and Las Vegas, NV. Much of the trip took place along Route 66.

This McDonald's, over I-44 near Vinita, OK, touts itself as the largest McDonalds in the world. It isn't anymore; but the novelty of it being built over the highway is the real appeal, anyway. It's rather odd to consider such a corporate place as anything other than...well, a corporate place, but driving under this arch between Joplin and Tulsa has always seemed like a symbolic transition to me...kind of like someone waving the starting flag declaring that a trip has begun. 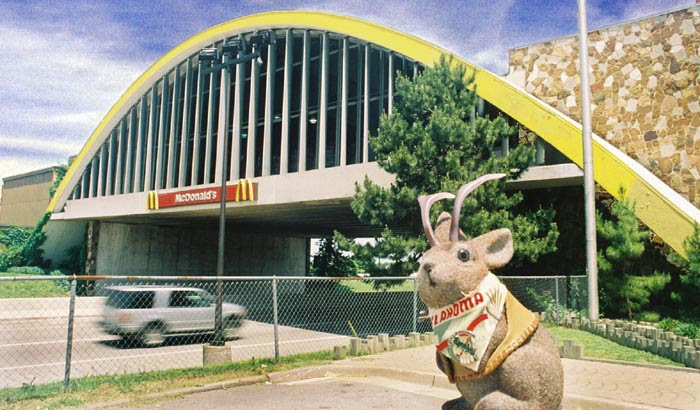 I was learning to use Photoshop at the time I posted these and my attempt at darkening an almost burned-out sky rendered an odd effect, but I've left it intact since it reminds me of the sky in old hand-colored postcards.

This McDonald's does actually have a bit of history. It was formerly a Howard Johnson's and is known locally as "The Glass House." It's also got a gift shop full of non-McDonald's touristy stuff befitting of a trip out West. In fact, as you travel Route 66 or the somewhat parallel I-44 going west out of Missouri into Oklahoma, this is the first place I know of that has a mass of the typical western tourist trap stuff you'll see all through Oklahoma, Texas and New Mexico. I'm talking about keychains that look like Indian headresses, flocked plastic buffalo...that sort of thing. By Arizona, typical tourist trap inventory takes on much less of a cowboy feel and tilts more toward southwestern Indian-inspired stuff.

A Sandwich in Stroud 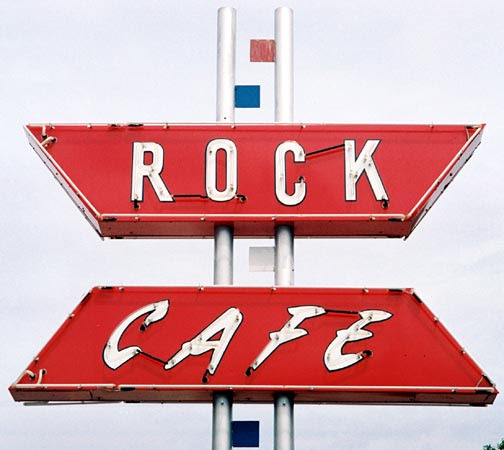 The Rock Cafe along Route 66 in Stroud, OK was built in 1936 and is on the National Register of Historic Places. The current owner, Dawn Welch, has restored it to as near it's original appearance as practical. This was a daytime visit but the fully functional neon sign deserves a nocturnal look on a future trip. 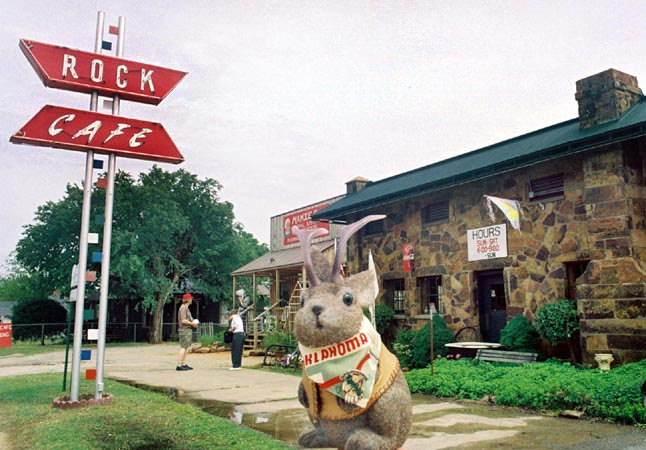 Note added when re-editing in 2007: Ms. Welch, who was not present when we were there on this trip, was the inspiration for the Sally the Porsche character in the Disney/Pixar movie, "Cars." Ace and I did meet her on a subsequent trip few months later. 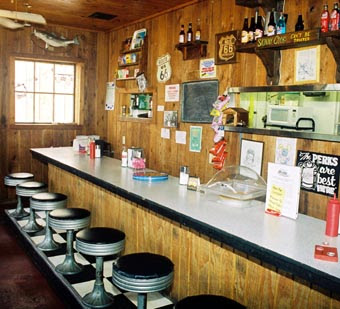 Although Ace discovers this wood motorcycle to be merely decorative, he is intrigued by the photo of a man tattooed with the cafe's logo. Apparently this place has some real devotees. Stroud also boasts this cool sign for the Skyliner Motel.

Oklahoma City, gateway to the West

The West really begins at Oklahoma City. At least that's the way it feels traveling West on Rt 66 or Interstates 40 and 44. Missouri and Arkansas are pleasantly "Ozarky" and Tulsa feels more of Googie and Art Deco. The first Cowboy image Ace sees on this trip is the welcome sign at the OKC stockyards. 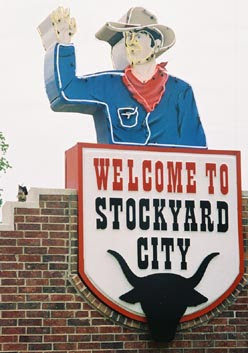 The Cattleman's Cafe in OKC serves as a mood-setter to Ace's journey West. A little history always helps; it began business in 1910 and in 1945 it changed ownership as the result of a dice game. Gotta love that. Disguised as an one of the usual customers, he enters. With doorpulls that look like a steer, this has to be a good place.

Jackalopes are more carnivorous that their Lepus ancestors and it is here that Ace devours the first of many steaks. It is a little-known fact that traveling jackalopes live by several rules, one of which is: eat no mediocre meals. He places the Cattleman's Cafe at the top of his Steak list. 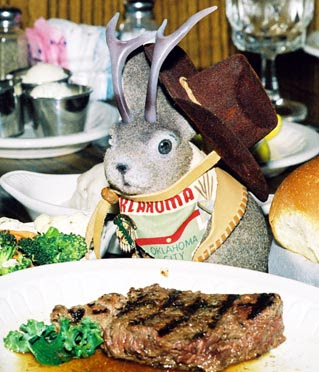 (Note added while re-editing in 2007: after many, many steakhouses, this one is still holds our #1 rating)

Art deco in an Irish town in the old West

The Tower Conoco Station in Shamrock, TX is a great blend of art deco, petroliana and Rt66 nostalgia. The best thing about is that it not only still exists but is being restored. The 1936 combo of a service station and a restaurant is currently used as the Shamrock Chamber of Commerce and sells a few souvenirs. If this building looks familiar to you, but you've never been to Shamrock, you may be remembering Ramone's House of Body Art in the Disney/Pixar movie, "Cars." There is no doubt that Ramone's was based on this place. The name "U-Drop Inn Cafe" was chosen in a contest won by a schoolboy who got $50 for his cleverness. 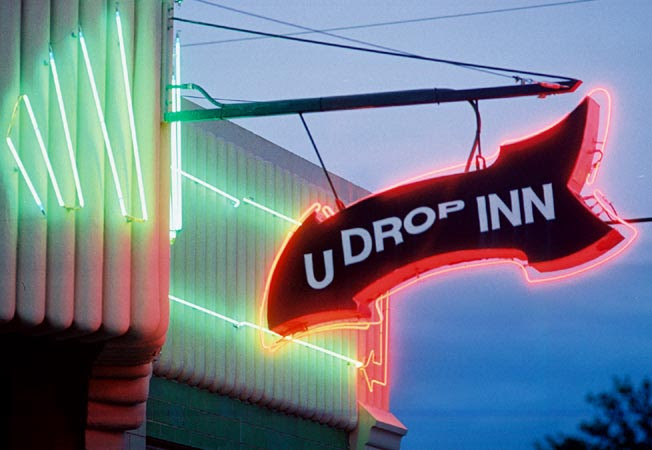 Info centers are bigger in Texas

The Texas tourism info center on I-40, West of Shamrock is rather striking at night. 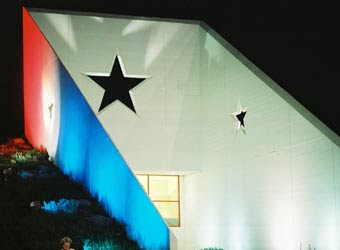 The Big Texan Steak Ranch is a regular stop for Ace on his way to and from the Western states, and this year was no exception. It contains not only a restaurant, but a motel, gift shop and horse boarding facility. 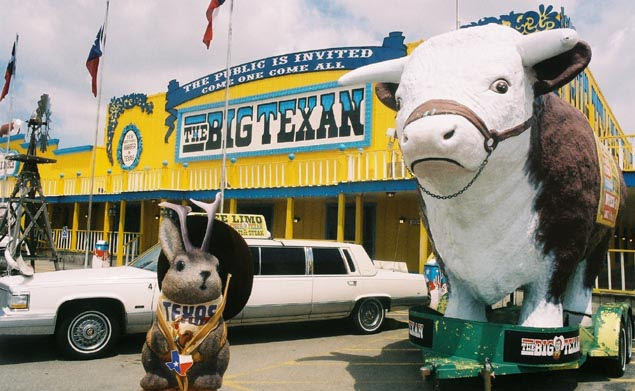 The road is generous in offering meetings with kindred spirits; Ace met Becky Ransom, former president of the Texas Route 66 Association, at the Big Texan. She now works there in administration and has previously held a variety of jobs at various Route 66 institutions. She was a wealth of information...and cute, too. 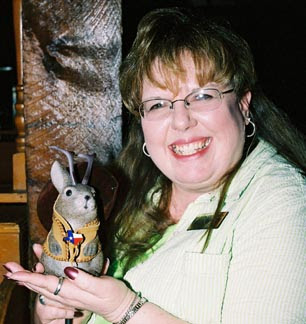 Editing note added in 2007: Becky was also acknowledged in "special thanks" column in the credits of the Disney/Pixar movie, "Cars."

And yes, The Big Texan is the place with the free 72 oz. steak. Its free...if you can eat it, with all the trimmings, in one hour...otherwise its $50. Ace discovered this one is a display, wrapped in cellophane. There is other fun available at the Big Texan, although these machines give only tokens. 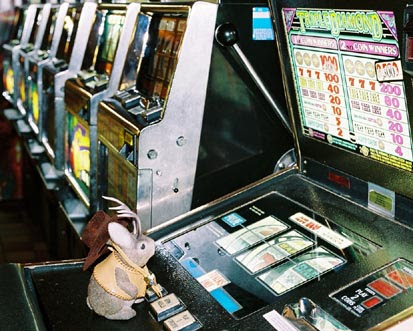 Like the motorcycle at Stroud, this wagon turns out to be only a toy, but it's a fun one. 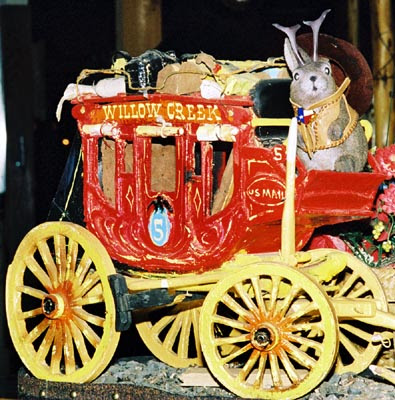 The Big Texan is proud of it's history. The business was started along the old Route 66 (now Amarillo Blv.) in 1960 and was moved to the newly completed Hwy 40 in 1970. Some of the motel rooms really carry through the Western theme. Can it get any better? Cowboy scenes under which to dream. Ace and I revisited most of the locations above on a subsequent trip a few months later.

This is so SWEEET! I love Glass House. It opened its doors Feb 8, 1958. So I was searching the internet trying to find out when it sold to Mcdonalds. And I came across your blog.
It's awesome. I love Oklahoma!! Where the waving wheat, can sure smell sweet, when ---0000